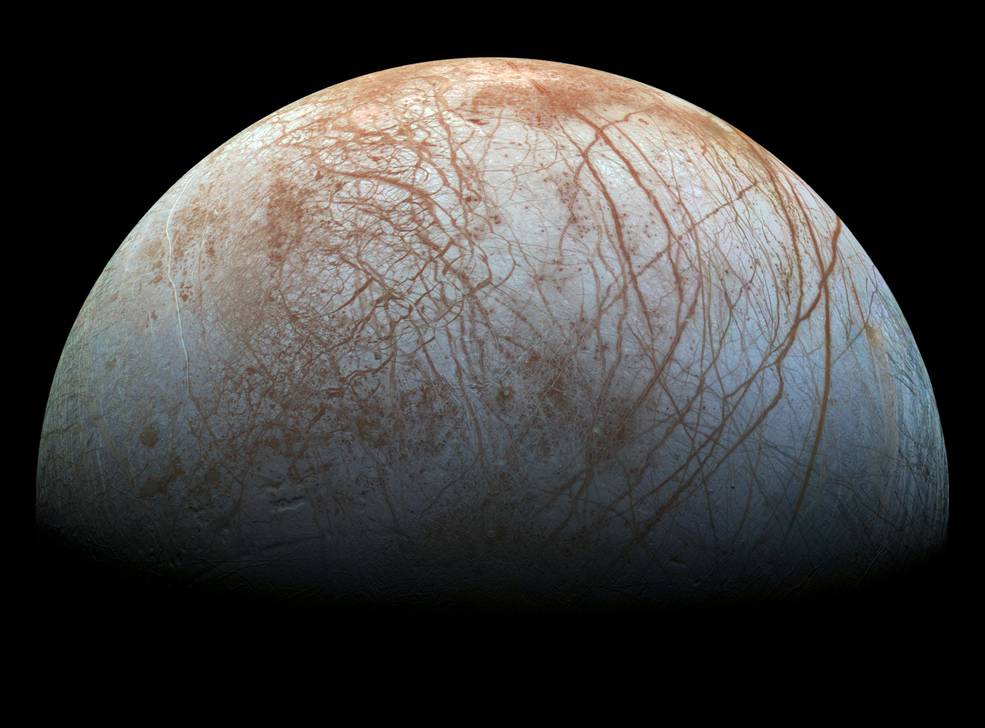 NASA's Europa Clipper mission is being designed to fly by the icy Jovian moon multiple times and investigate whether it possesses the ingredients necessary for life.
Credits: NASA/JPL-Caltech/SETI Institute
NASA's upcoming mission to investigate the habitability of Jupiter's icy moon Europa now has a formal name: Europa Clipper.
The moniker harkens back to the clipper ships that sailed across the oceans of Earth in the 19th century. Clipper ships were streamlined, three-masted sailing vessels renowned for their grace and swiftness. These ships rapidly shuttled tea and other goods back and forth across the Atlantic Ocean and around globe.
In the grand tradition of these classic ships, the Europa Clipper spacecraft would sail past Europa at a rapid cadence, as frequently as every two weeks, providing many opportunities to investigate the moon up close. The prime mission plan includes 40 to 45 flybys, during which the spacecraft would image the moon's icy surface at high resolution and investigate its composition and the structure of its interior and icy shell.
Europa has long been a high priority for exploration because it holds a salty liquid water ocean beneath its icy crust. The ultimate aim of Europa Clipper is to determine if Europa is habitable, possessing all three of the ingredients necessary for life: liquid water, chemical ingredients, and energy sources sufficient to enable biology.
"During each orbit, the spacecraft spends only a short time within the challenging radiation environment near Europa. It speeds past, gathers a huge amount of science data, then sails on out of there," said Robert Pappalardo, Europa Clipper project scientist at NASA's Jet Propulsion Laboratory in Pasadena, California.
Previously, when the mission was still in the conceptual phase, it was sometimes informally called Europa Clipper, but NASA has now adopted that name as the former title for the mission.
The mission is being planned for launch in the 2020s, arriving in the Jupiter system after a journey of several years.
JPL manages the mission for the agency's Science Mission Directorate in Washington.
For more information about NASA's Europa Clipper mission, visit:
http://www.nasa.gov/europa
Preston DychesJet Propulsion Laboratory, Pasadena, Calif.818-354-7013preston.dyches@jpl.nasa.gov
Dwayne Brown / Laurie CantilloNASA Headquarters, Washington202-358-1726 / 202-358-1077dwayne.c.brown@nasa.gov / laura.l.cantillo@nasa.gov
2017-065
Editor: Tony Greicius
Publicado por salud equitativa en 7:11