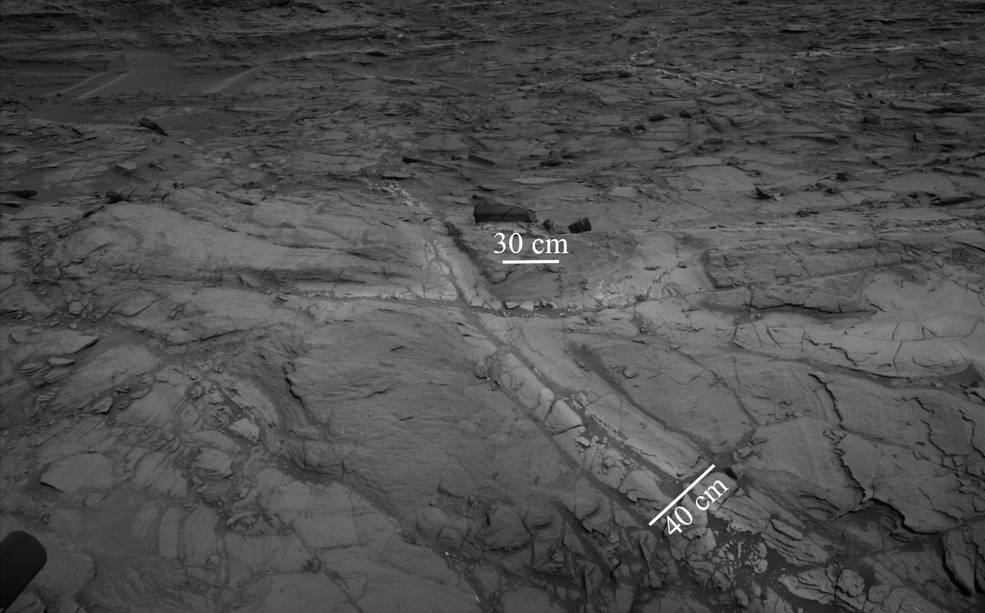 Pale zones called "halos" border bedrock fractures visible in this 2015 image from NASA's Curiosity Mars rover. Measurements overlaid on the image offer a sense of scale for the size of these fractures. The rover team determined that the halos are rich in silica, a clue to the duration of wet environmental conditions long ago. The location is on the lower slope of Mars' Mount Sharp.
Credits: NASA/JPL-Caltech
Pale "halos" around fractures in bedrock analyzed by NASA's Curiosity Mars rover contain copious silica, indicating that ancient Mars had liquid water for a long time.
"The concentration of silica is very high at the centerlines of these halos," said Jens Frydenvang, a rover-team scientist at Los Alamos National Laboratory in New Mexico, and the University of Copenhagen in Denmark. "What we’re seeing is that silica appears to have migrated between very old sedimentary bedrock and into younger overlying rocks."
Frydenvang is the lead author of a report about these findings published in Geophysical Research Letters.
NASA landed Curiosity on Mars in 2012 with a goal to determine whether Mars ever offered environmental conditions favorable for microbial life. The mission "has been very successful in showing that Gale Crater once held a lake with water that we would even have been able to drink from, but we still don’t know how long this habitable environment endured," he said. "What this finding tells us is that, even when the lake eventually evaporated, substantial amounts of groundwater were present for longer than we previously thought -- further expanding the window for when life might have existed on Mars."
For more information about the newly published report, visit:
http://bit.ly/2r8dyOF
The halos were first analyzed in 2015 with Curiosity's science-instrument payload, including the laser-shooting Chemistry and Camera (ChemCam) instrument, which was developed at Los Alamos National Laboratory in conjunction with the French space agency. The rover has subsequently explored higher and younger layers of lower Mount Sharp, investigating how ancient environmental conditions changed.
NASA's two active Mars rovers and three Mars orbiters are all part of ambitious robotic exploration to understand Mars, which helps lead the way for sending humans to Mars in the 2030s. The Curiosity mission is managed by NASA's Jet Propulsion Laboratory, a division of Caltech in Pasadena, California, for NASA's Science Mission Directorate, Washington. For more about Curiosity, visit:
http://www.nasa.gov/curiosity
Guy WebsterJet Propulsion Laboratory, Pasadena, Calif.818-354-6278guy.webster@jpl.nasa.gov
Laura MullaneLos Alamos National Laboratory, Los Alamos, N.M.505-667-6012mullane@lanl.gov
Laurie Cantillo / Dwayne BrownNASA Headquarters, Washington202-358-1077 / 202-358-1726laura.l.cantillo@nasa.gov / dwayne.c.brown@nasa.gov
2017-154
Editor: Tony Greicius
Publicado por salud equitativa en 14:06