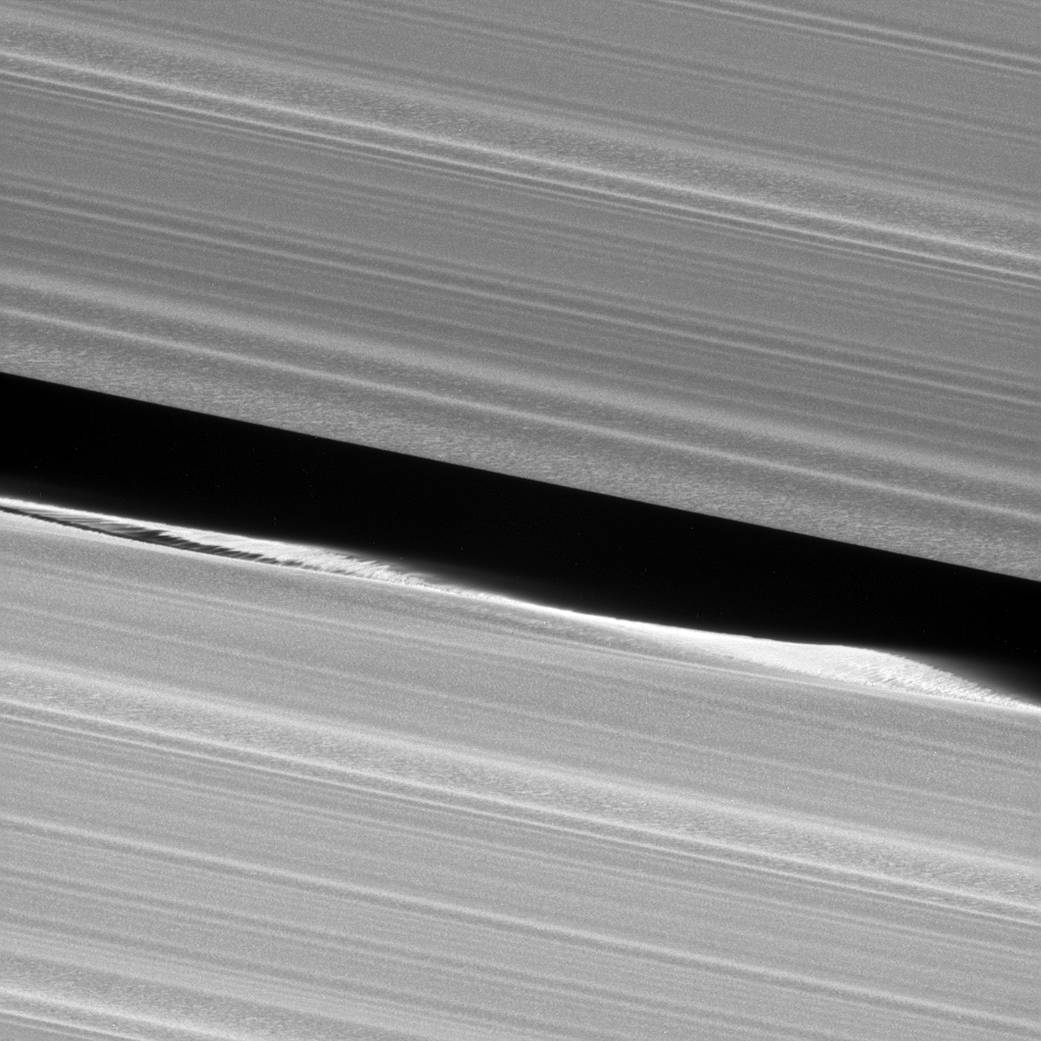 Before Cassini entered its Grand Finale orbits, it acquired unprecedented views of the outer edges of the main ring system. For example, this close-up view of the Keeler Gap, which is near the outer edge of Saturn's main rings, shows in great detail just how much the moon Daphnis affects the edges of the gap.
This image was part of a mosaic that included Daphnis (PIA17212).
Daphnis creates waves in the edges of the gap through its gravitational influence. Some clumping of ring particles can be seen in the perturbed edge, similar to what was seen on the edges of the Encke Gap back when Cassini arrived at Saturn in 2004.
This view looks toward the sunlit side of the rings from about 3 degrees above the ring plane. The view was acquired at a distance of approximately 18,000 miles (30,000 kilometers) from Daphnis and at a Sun-Daphnis-spacecraft, or phase, angle of 69 degrees. Image scale is 581 feet (177 meters) per pixel. The image was taken in visible light with the Cassini spacecraft narrow-angle camera on Jan. 16, 2017.
The Cassini mission is a cooperative project of NASA, ESA (the European Space Agency) and the Italian Space Agency. The Jet Propulsion Laboratory, a division of the California Institute of Technology in Pasadena, manages the mission for NASA's Science Mission Directorate, Washington. The Cassini orbiter and its two onboard cameras were designed, developed and assembled at JPL. The imaging operations center is based at the Space Science Institute in Boulder, Colorado.
For more information about the Cassini-Huygens mission visit https://saturn.jpl.nasa.gov and http://www.nasa.gov/cassini . The Cassini imaging team homepage is at http://ciclops.org .
Credit: NASA/JPL-Caltech/Space Science Institute
Editor: Tony Greicius
Publicado por salud equitativa en 14:07