On Oct.13, 2014 something very strange happened to the camera aboard NASA’s Lunar Reconnaissance Orbiter (LRO). The Lunar Reconnaissance Orbiter Camera (LROC), which normally produces beautifully clear images of the lunar surface, produced an image that was wild and jittery. From the sudden and jagged pattern apparent in the image, the LROC team determined that the camera must have been hit by a tiny meteoroid, a small natural object in space. 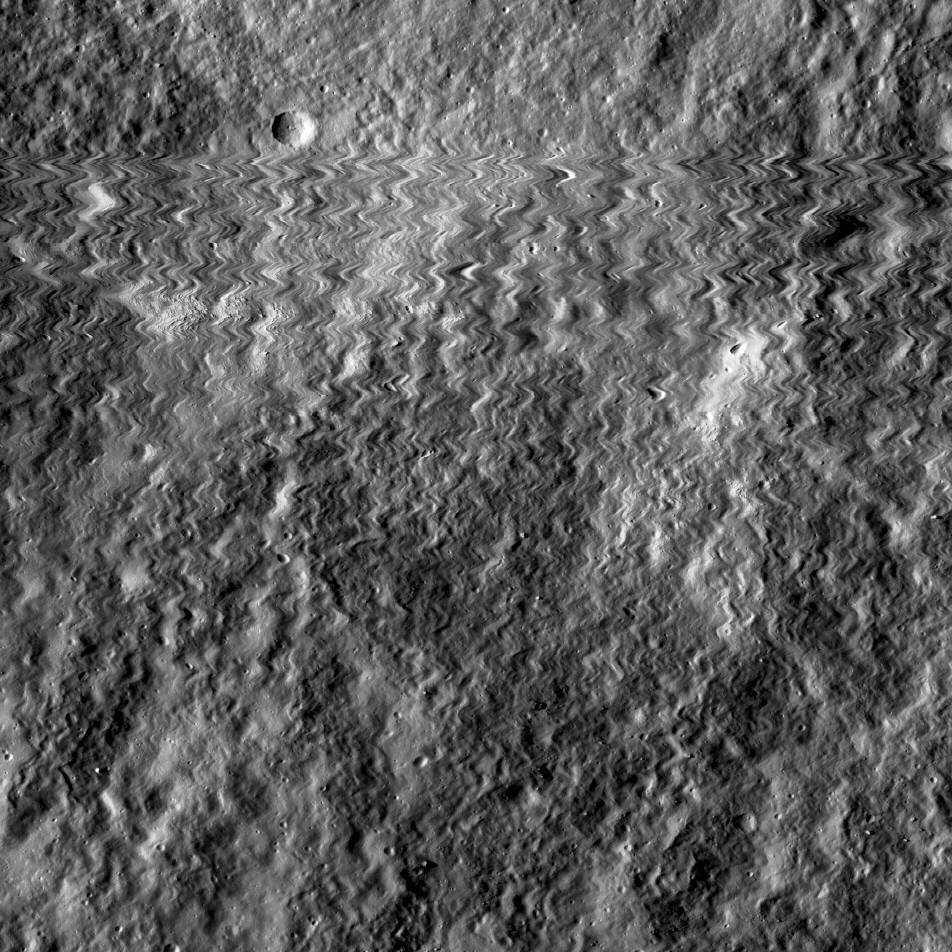 The first wild back-and-forth line records the moment on October 13, 2014 when the left Narrow Angle Camera's radiator was struck by a meteoroid.
Credits: NASA's Goddard Space Flight Center/Arizona State University
LROC is a system of three cameras mounted on the LRO spacecraft. Two Narrow Angle Cameras (NACs) capture high resolution black and white images. The third Wide Angle Camera captures moderate resolution images using filters to provide information about the properties and color of the lunar surface.
The NAC works by building an image one line at a time. The first line is captured, then the orbit of the spacecraft moves the camera relative to the surface, and then the next line is captured, and so on, as thousands of lines are compiled into a full image.
According to Mark Robinson, professor and principal investigator of LROC at ASU’s School of Earth and Space Exploration, the jittery appearance of the image captured is the result of a sudden and extreme cross-track oscillation of the camera. LROC researchers concluded that there must have been a brief violent movement of the left Narrow Angle Camera.
There were no spacecraft events like solar panel movements or antenna tracking that might have caused spacecraft jitter during this period. “Even if there had been, the resulting jitter would have affected both cameras identically,” says Robinson. “The only logical explanation is that the NAC was hit by a meteoroid.” 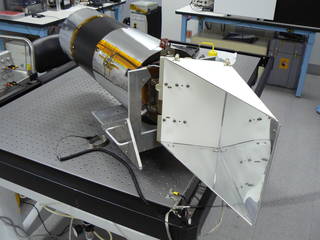 The Narrow Angle Camera sits on a bench in the clean room at Malin Space Science Systems. The radiator (right) extends off the electronics end and keeps the sensor cool while imaging the moon. Computer modeling shows the meteoroid impacted somewhere on the radiator.
Credits: Malin Space Science Systems/Arizona State University
How big was the meteoroid?
During LROC’s development, a detailed computer model was made to insure the NAC would not fail during the severe vibrations caused by the launch of the spacecraft. The computer model was tested before launch by attaching the NAC to a vibration table that simulated launch. The camera passed the test with flying colors, proving its stability.
Using this detailed computer model, the LROC team ran simulations to see if they could reproduce the distortions seen on the Oct. 13 image and determine the size of the meteoroid that hit the camera. They estimate the impacting meteoroid would have been about half the size of a pinhead (0.8 millimeter), assuming a velocity of about 4.3 miles (7 kilometers) per second and a density of an ordinary chondrite meteorite (2.7 grams/cm3).
“The meteoroid was traveling much faster than a speeding bullet,” says Robinson. “In this case, LROC did not dodge a speeding bullet, but rather survived a speeding bullet!”
How rare is it that the effects of an event like this were captured on camera? Very rare, according to Robinson. LROC typically only captures images during daylight and then only about 10 percent of the day, so for the camera to be hit by a meteor during the time that it was also capturing images is statistically unlikely.
“LROC was struck and survived to keep exploring the moon,” says Robinson, “thanks to Malin Space Science Systems’ robust camera design.”
“Since the impact presented no technical problems for the health and safety of the instrument, the team is only now announcing this event as a fascinating example of how engineering data can be used, in ways not previously anticipated, to understand what is happing to the spacecraft over 236,000 miles (380,000 kilometers) from the Earth," said John Keller, LRO project scientist from NASA’s Goddard Space Flight Center in Greenbelt, Maryland.
Launched on June 18, 2009, LRO has collected a treasure trove of data with its seven powerful instruments, making an invaluable contribution to our knowledge about the moon.
“A meteoroid impact on the LROC NAC reminds us that LRO is constantly exposed to the hazards of space,” says Noah Petro, deputy project scientist from NASA Goddard. “And as we continue to explore the moon, it reminds us of the precious nature of the data being returned.”
LRO is managed by NASA's Goddard Space Flight Center in Greenbelt, Maryland, as a project under NASA's Discovery Program. The Discovery Program is managed by NASA's Marshall Spaceflight Center in Huntsville, Alabama, for the Science Mission Directorate at NASA Headquarters in Washington.
The Lunar Reconnaissance Orbiter Camera was developed at Malin Space Science Systems in San Diego, California and Arizona State University in Tempe.
http://www.nasa.gov/lro
By Nancy Neal JonesNASA's Goddard Space Flight Center in Greenbelt, MD
Editor: Karl Hille
Publicado por salud equitativa en 11:29