A South Polar Pit or an Impact Crater? | NASA

or an Impact Crater? 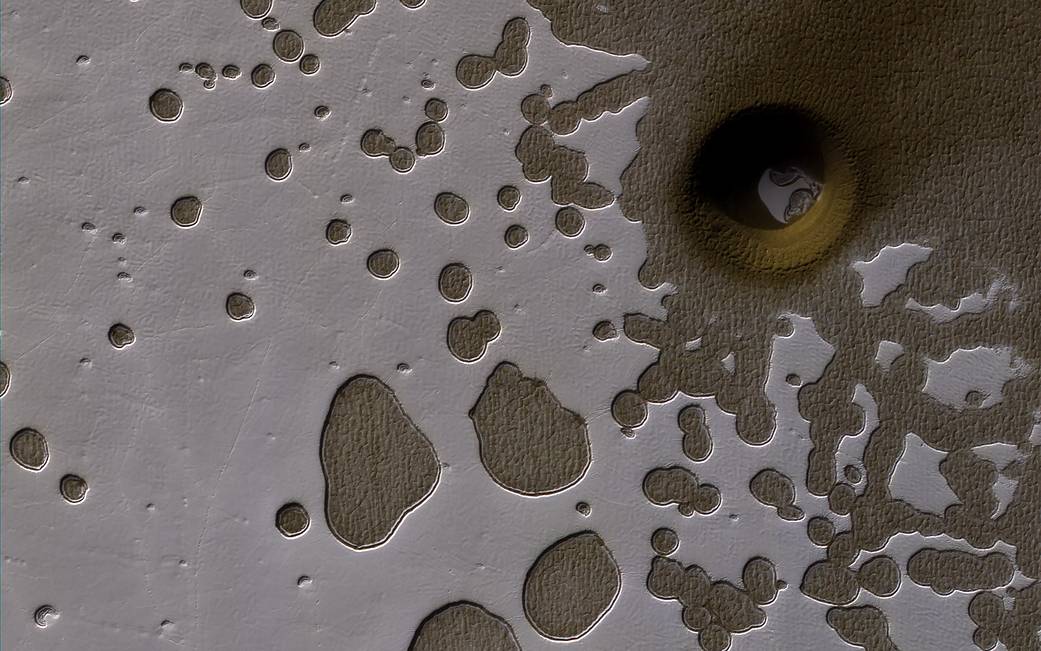 This observation from NASA's Mars Reconnaissance Orbiter show it is late summer in the Southern hemisphere, so the Sun is low in the sky and subtle topography is accentuated in orbital images.
We see many shallow pits in the bright residual cap of carbon dioxide ice (also called "Swiss cheese terrain"). There is also a deeper, circular formation that penetrates through the ice and dust. This might be an impact crater or it could be a collapse pit.
This is a stereo pair with ESP_049945_0930.
The map is projected here at a scale of 50 centimeters (19.7 inches) per pixel. [The original image scale is 49.7 centimeters (19.6 inches) per pixel (with 2 x 2 binning); objects on the order of 149 centimeters (67.3 inches) across are resolved.] North is up.
The University of Arizona, Tucson, operates HiRISE, which was built by Ball Aerospace & Technologies Corp., Boulder, Colo. NASA's Jet Propulsion Laboratory, a division of Caltech in Pasadena, California, manages the Mars Reconnaissance Orbiter Project for NASA's Science Mission Directorate, Washington.
Image credit: NASA/JPL-Caltech/Univ. of Arizona
Image download options
Editor: Tony Greicius
Publicado por salud equitativa en 8:21