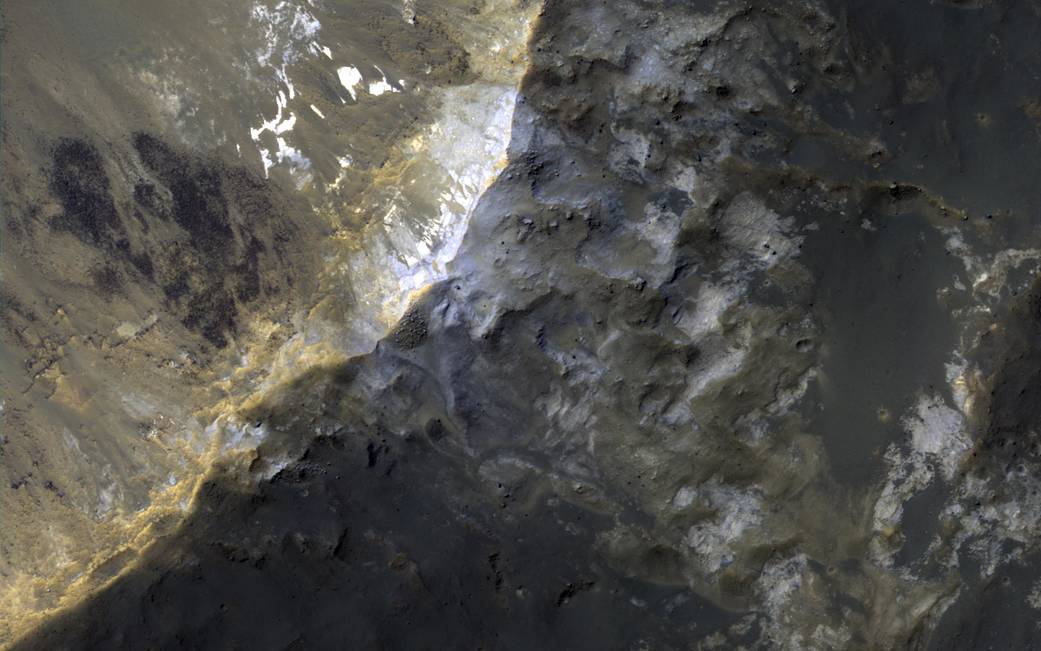 In this image, NASA's Mars Reconnaissance Orbiter (MRO) observes an impact crater with associated bright deposits that at first glance give the appearance of seasonal frost or ice accumulations. MRO has an onboard spectrometer called CRISM that can distinguish between ices and other minerals. Unfortunately, there is currently no coverage of this particular spot. However, it can be deduced through several lines of evidence that this is, in fact, not ice.
Just like Earth, Mars experiences seasons that change as the planet orbits the Sun. Seasonal changes are most apparent at the higher latitudes. As these regions in each hemisphere enter their respective summer seasons, the Sun rises higher in the Martian sky causing frost and ice to sublimate, and illuminate more features across the landscape. As the high latitudes of each hemisphere move toward their respective winters, the days (called "sols") grow shorter and the sun hangs low on the horizon, giving rise to prolonged periods of cold, darkness, and frost accumulation.
First, it should be noted that at the time this image was taken, the Southern hemisphere is at the end of the summer season, so any frost or ice deposits have long since sublimated away. Second, numerous HiRISE images of seasonal targets show that ice accumulates on pole-facing slopes. The deposits in question are situated on a slope that faces the equator, and would not accumulate deposits of frost. Thus, it can be concluded that these exposures are light-toned mineral deposits.
The map is projected here at a scale of 25 centimeters (9.8 inches) per pixel. [The original image scale is 25.5 centimeters (10 inches) per pixel (with 1 x 1 binning); objects on the order of 77 centimeters (30.3 inches) across are resolved.] North is up.
The University of Arizona, Tucson, operates HiRISE, which was built by Ball Aerospace & Technologies Corp., Boulder, Colo. NASA's Jet Propulsion Laboratory, a division of Caltech in Pasadena, California, manages the Mars Reconnaissance Orbiter Project for NASA's Science Mission Directorate, Washington.
Image credit: NASA/JPL-Caltech/Univ. of Arizona
Editor: Tony Greicius
Publicado por salud equitativa en 9:58