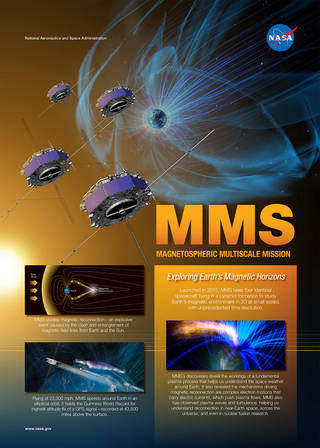 Infographic on NASA’s Magnetospheric Multiscale mission.
Credits: NASA's Goddard Space Flight Center/Mary Pat Hrybyk-Keith
In the cold vacuum of space, four satellites travel through the darkness, cruising around Earth at speeds up to 22,300 miles per hour. These spacecraft comprise NASA’s Magnetospheric Multiscale mission, called MMS for short. Looking at electric and magnetic fields, hot plasmas, and high-energy particles, they have been charting the dynamic space environment around Earth for over two years. What they’ve discovered in 2017 is changing how we understand the magnetic environment protecting our planet.
MMS was initially launched into an orbit that passed it through a region of the magnetosphere — the magnetic bubble surrounding Earth — on the side of the planet closest to the Sun, about one fifth of the way to the moon. There it studied an explosive event, called magnetic reconnection, caused by the clash and entanglement of magnetic field lines from Earth and the Sun.
“MMS is unique because its so much like a laboratory experiment designed to reveal the nature of a single process — magnetic reconnection,” says Bill Paterson, mission scientist at NASA’s Goddard Space Flight Center in Greenbelt, Maryland. “Once we understand it in this particular space laboratory near Earth, we will know many of the basics of how it must work in other places, like the Sun.”
MMS is just one mission in NASA’s Heliophysics fleet, which investigates the complex Earth-Sun environment. Studying heliophysics — the science of understanding the Sun and its interactions with Earth and the solar system — not only helps us understand fundamental processes throughout our universe, but is also a key component of keeping astronauts and spacecraft safe from harmful radiation and space weather.
Due to MMS’s unique configuration of four spacecraft flying in a tight pyramid shape, the mission is able to observe magnetic field and plasma events in three dimensions. The spacing of the spacecraft – at less than five miles between the probes — allows scientists to unravel complex details in the behavior of fields and particles, such as how energy is transferred from one to the other. Furthermore, the instruments aboard MMS are 100 times faster than any flown on a previous mission, enabling MMS to capture events that happen in the blink of an eye.

Download MMS infographic as PDF
A key discovery MMS revealed in Phase 1 was complex electron motions in the thin layers of electrical current where reconnection happens. The unique dances electrons make in this region allow them to gain additional energy and accelerate the reconnection process. Magnetic reconnection happens across the universe, from the Sun to quasars to nuclear reactors, and MMS’s discoveries in its Earth-space laboratory help scientists understand the phenomenon in all locations.
After two years of fruitful scientific discoveries surpassing the mission goals of Phase 1, the spacecraft’s orbit was adjusted in the spring of 2017 to bring it into a new region.  From May until October it passed through the magnetosphere on the dark side of Earth at nearly half the distance to the moon. In this region, magnetic reconnection is thought to be responsible for explosions of the auroras seen above the poles.
In Phase 2 of the mission, MMS looked at particle and wave interactions in the long region of the magnetosphere trailing behind the Earth called the magnetotail. It also studied how the region becomes turbulent during solar storms, and how the solar wind can affect magnetic reconnection.
Now beginning a new, extended phase of the mission, MMS is again visiting the dayside, but at twice the original distance from Earth. Looking at reconnection, turbulence, and particle acceleration in the solar wind, it will study the bow shock that stands ahead of our planet deflecting and slowing that stream of particles flowing from the Sun.
“We are all really excited that MMS will now bring its capabilities to resolve the thinnest structures of reconnection to a new environment upstream of Earth in the solar wind,” said Thomas Moore, senior project scientist for MMS at NASA’s Goddard Space Flight Center.
To date, MMS data has contributed to over 340 papers led by scientists around the world, and its new orbit, above and beyond its previous circuit, opens the doors to countless new discoveries.
Related Links
Banner image: Illustration of MMS spacecraft. Credit: NASA's Goddard Space Flight Center
By Mara Johnson-GrohNASA's Goddard Space Flight Center, Greenbelt, Md.
Editor: Rob Garner
Publicado por salud equitativa en 6:46