What Stars Will Hatch From The Tarantula Nebula? | NASA

What Stars Will Hatch From The Tarantula Nebula? | NASA

What Stars Will Hatch

From The Tarantula Nebula?

Seeks to Find Out 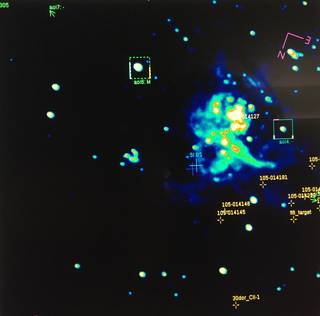 The Tarantula Nebula as seen on SOFIA’s visible light guide camera during observations from Christchurch, New Zealand.
Credits: NASA/SOFIA/Nicholas A. Veronico
To have a full picture of the lives of massive stars, researchers need to study them in all stages – from when they’re a mass of unformed gas and dust, to their often dynamic end-of-life explosions.
NASA's flying telescope, the Stratospheric Observatory for Infrared Astronomy, or SOFIA, is particularly well-suited for studying the pre-natal stage of stellar development in star-forming regions, such as the Tarantula Nebula, a giant mass of gas and dust located within the Large Magellanic Cloud, or LMC.
Researchers from the Minnesota Institute for Astrophysics, led by Michael Gordon, went aboard SOFIA to identify and characterize the brightness, ages and dust content of three young star-forming regions within the LMC.
“The Large Magellanic Cloud has always been an interesting and excellent laboratory for massive star formation,” said Gordon. “The chemical properties of star-forming regions in the LMC are significantly different than in the Milky Way, which means the stars forming there potentially mirror the conditions of star formation in dwarf galaxies at earlier times in the universe.”
In our galactic neighborhood, which includes the LMC, massive stars – generally classified as stars more than eight times the mass of Earth’s Sun – are believed to form exclusively in very dense molecular clouds. The dark dust and gas absorb background light, which prevents traditional optical telescopes from imaging these areas.
“The mid-infrared capabilities of SOFIA are ideal for piercing through infrared dark clouds to capture images of potential massive star-forming regions,” Gordon said.
The observations were completed with the Faint Object infrared Camera for the SOFIA Telescope, known as FORCAST. This infrared camera also performs spectroscopy, which identifies the elements present.
Astronomers study stars evolving in both the optical and the infrared to learn more about the photosphere, and the population of stars in the photosphere. The mid- and far-infrared data from SOFIA reaffirm dust temperature and mass accretion rates that are consistent with prior research of the LMC.
"We want to combine as many observations as we can from the optical, as seen through images from the Hubble Space Telescope, all the way out to the far infrared, imaged using the Spitzer Space Telescope and the Herschel Space Observatory, to get as broad a picture as possible," Gordon continued. "No previous researchers have used FORCAST’s wavelength range to effectively study massive star formations. We needed SOFIA to fill in the 20- to 40-micron gap to give us the whole picture of what’s taking place."
In summer 2017, further research of the Tarantula Nebula was accomplished aboard SOFIA during the observatory’s six-week science campaign operating from Christchurch, New Zealand, to study the sky in the Southern Hemisphere. Gordon and his team are hopeful that when analyzed, data obtained from the Christchurch flights will reveal previously undiscovered young massive stars forming in the region, which have never been observed outside of the Milky Way.
SOFIA is a Boeing 747SP jetliner modified to carry a 100-inch diameter telescope. It is a joint project of NASA and the German Aerospace Center, DLR. NASA’s Ames Research Center in California’s Silicon Valley manages the SOFIA program, science and mission operations in cooperation with the Universities Space Research Association headquartered in Columbia, Maryland, and the German SOFIA Institute (DSI) at the University of Stuttgart. The aircraft is based at NASA’s Armstrong Flight Research Center's Hangar 703, in Palmdale, California.
Media Point of Contact
Nicholas A. VeronicoNVeronico@sofia.usra.edu • SOFIA Science CenterNASA Ames Research Center, Moffett Field, California
Editor: Kassandra Bell
Publicado por salud equitativa en 6:47