The first issue, dating back to 1918 and all subsequent available issues, were displayed for students and the general public this week at the Maharaja's college premises in the form of an exhibition. 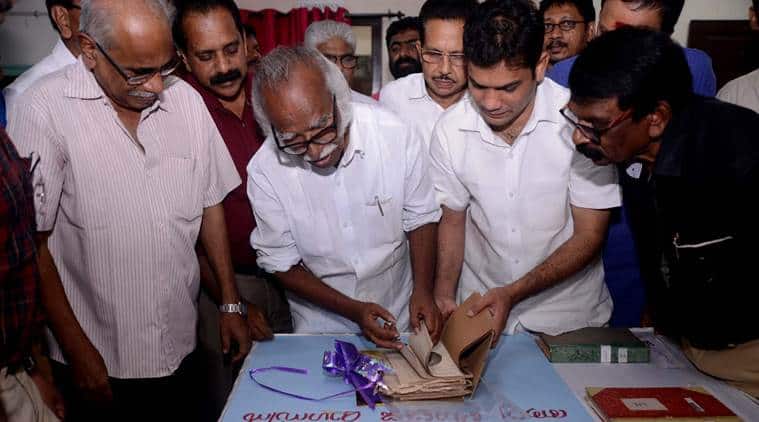 Kadannappally Ramachandran, minister in charge of archives, leafs through the 1918 issue of the Maharaja’s College magazine


“At a time when there are attempts being made to rewrite history, it’s vital for us to preserve these original documents that pointed to the truth.”
That’s how PK Ravindran explained the importance of safeguarding old issues of the official magazine of Maharaja’s College, one of Kerala’s premier and historic educational institutions. This year, the college magazine has turned 100 years old, a rare feat for an intra-college publication in the country. The first issue, dating back to 1918 and all subsequent available issues, were displayed for students and the general public this week at the college premises in the form of an exhibition.
Ravindran, chairman of the college governing council, describes how the publication had begun operations in October 1918 – shortly before the conclusion of the First World War – taking the form of a journal that catered to a serious, informed section of English-language readers.
“The first publication of the college magazine was for a special occasion. The year 1918 marked the 60th birthday of then-king of the princely state of Cochin – Rama Varma XVI. It was more of a journal than a magazine during those days. It had these articles of a serious nature by experts and academics,” said Ravindran.
For a college steeped in the rich annals of history of pre-independence Kerala, it’s official magazine, notes Ravindran, was closely interlinked to the Kingdom of Cochin that ruled vast swathes of central Kerala, including present-day parts of Ernakulam and Thrissur districts. The college had started out as an English school in 1845, and offered advanced courses from the beginning of 1875. It took on the now familiar name of ‘Maharaja’s in 1925, garnering acclaim for its renowned teaching methods and highly-respected faculty. Located on the banks of the Vembanad Lake in the heart of Kochi, the college, to this day, has a plethora of old colonial buildings, wide classrooms and corridors and a green campus. During days of pre-independence and later-post-independence, the magazine continued to document a very important period of history that reflected changes in the Kerala society, its health and educational reforms and it’s transition from a princely state to a democratically-elected civilian government.
Kadannappally Ramachandran, Minister in-charge of archives and archaeology who inaugurated the exhibition on Monday, said it was vital that such ancient relics and manuscripts be preserved to tell future generations about the idea of India and it’s culture. He added that the archaeology department will pitch in to assist with protection of the relics.
In its present form, many of the old issues of the magazine are in need of preservation and digitisation, said Ravindran.
“The pages are powdered so they need to be preserved. Most of the issues are with us in our college library, the rest in the Appan Thampan museum in Thrissur and the library attached to the High Court in Kochi. We have spoken to the archives department of the government and will discuss ways to preserve the older issues,” he added.
Maharaja’s College Principal KN Krishna Kumar said plans are afoot to build a modern library within the campus at a cost of Rs 8.5 crore. “Work on it is progressing. Once we get all the issues, we will shift them to the modern complex where it can be displayed for students and the public,” said Krishna Kumar.
Publicado por salud equitativa en 10:27