Combined works of over 50 regional and international ceramic artists and sculptors, fresh out of a rolling arts residency in the heart of Madhya Pradesh, will greet those who visit the culture centre Triveni Kala Sangam in Delhi from Wednesday. 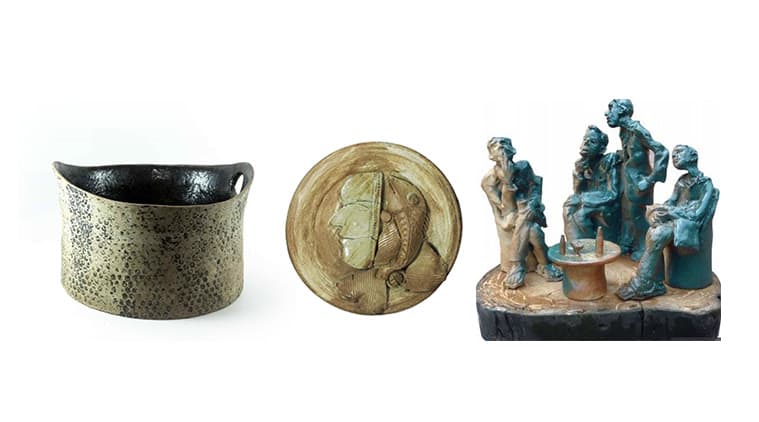 The works will be on view till December 9. (Source: IANS)
Combined works of over 50 regional and international ceramic artists and sculptors, fresh out of a rolling arts residency in the heart of Madhya Pradesh, will greet those who visit the culture centre Triveni Kala Sangam here from Wednesday. Sprawled across its open amphitheatre, over 150 works, ranging from abstract sculptures to representational art depicting human figures, faces and even cows, have been commissioned and curated by art commune Art Ichol, located, as the organisers say, in the rural heartland of India.
It is the first time they have been exhibited outside the organisation’s cultural centre of Ichol, a village located between Khajuraho and Bandhavgarh. “The works have been created over the past three years by artists who come and stay with us as artists-in-residence. Because of the diverse portfolios of the artists, the works on display are equally diverse,” Kolkata gallerist and Art Ichol head Ambica Beri told IANS.
Beri, who thinks that the arts market has shifted from having more art investors than buyer-collectors, also shared that residencies are relaxed spaces where artists respond to their inner creativity, the instructor’s demands and the space. “There was a local farmer who came to us, looking for ways to create animal figurines. We taught him ceramics, and now there’s also a significant change in the ways in which he himself perceives his art. He’s experimenting, doing square cows,” said Beri, who has been running art gallery Sanskriti in Kolkata for 28 years.
Among the participating artists are: Anjani Khanna, Saturo Hoshimo, Jacques Kaufmann, Madhvi Subramaniam, Anupam Sud, Laxma Goud, Sandra Black , Ketna Patel , Naidee Changmoh, Beri had previously said in a statement. The residency environment, on a close look, is visible in the plethora of works created in bronze, ceramic, stone and metal.
Displaying traditional forms, mediums and glazes, as well as those with relative novelty, the works seem to be fused with an energy that comes with a relaxed space that allows creative freedom, and makes minimal demands. For a collector, buyer or even just a viewer not initiated into the arts, a walk through the pieces of art could prove an exercise in creativity itself. The works will be on view till December 9.
Publicado por salud equitativa en 11:21