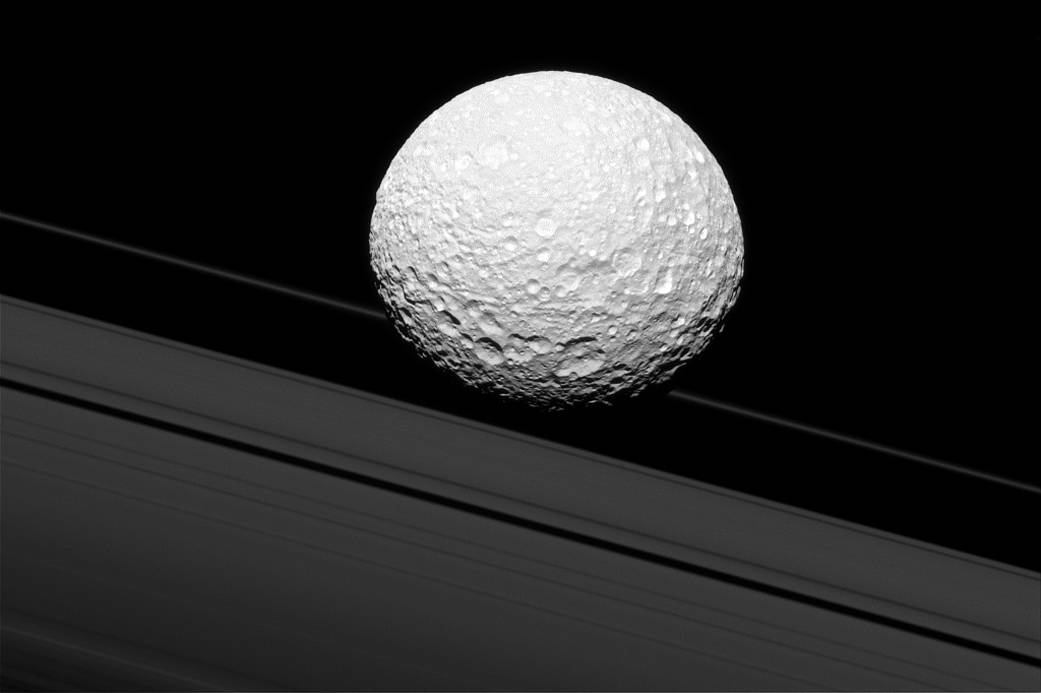 It may look as though Saturn's moon Mimas is crashing through the rings in this image taken by NASA's Cassini spacecraft, but Mimas is actually 28,000 miles (45,000 kilometers) away from the rings. There is a strong connection between the icy moon and Saturn's rings, though. Gravity links them together and shapes the way they both move.
The gravitational pull of Mimas (246 miles or 396 kilometers across) creates waves in Saturn's rings that are visible in some Cassini images. Mimas' gravity also helps create the Cassini Division (not pictured here), which separates the A and B rings.
This view looks toward the anti-Saturn hemisphere of Mimas. North on Mimas is up and rotated 15 degrees to the right. The image was taken in green light with the Cassini spacecraft narrow-angle camera on Oct. 23, 2016.
The view was acquired at a distance of approximately 114,000 miles (183,000 kilometers) from Mimas and at a Sun-Mimas-spacecraft, or phase, angle of 29 degrees. Image scale is 3,300 feet (1 kilometer) per pixel.
The Cassini mission is a cooperative project of NASA, ESA (the European Space Agency) and the Italian Space Agency. The Jet Propulsion Laboratory, a division of the California Institute of Technology in Pasadena, manages the mission for NASA's Science Mission Directorate, Washington. The Cassini orbiter and its two onboard cameras were designed, developed and assembled at JPL. The imaging operations center is based at the Space Science Institute in Boulder, Colorado.
For more information about the Cassini-Huygens mission visit http://saturn.jpl.nasa.gov and http://www.nasa.gov/cassini. The Cassini imaging team homepage is at http://ciclops.org.
Credit: NASA/JPL-Caltech/Space Science Institute
Editor: Tony Greicius