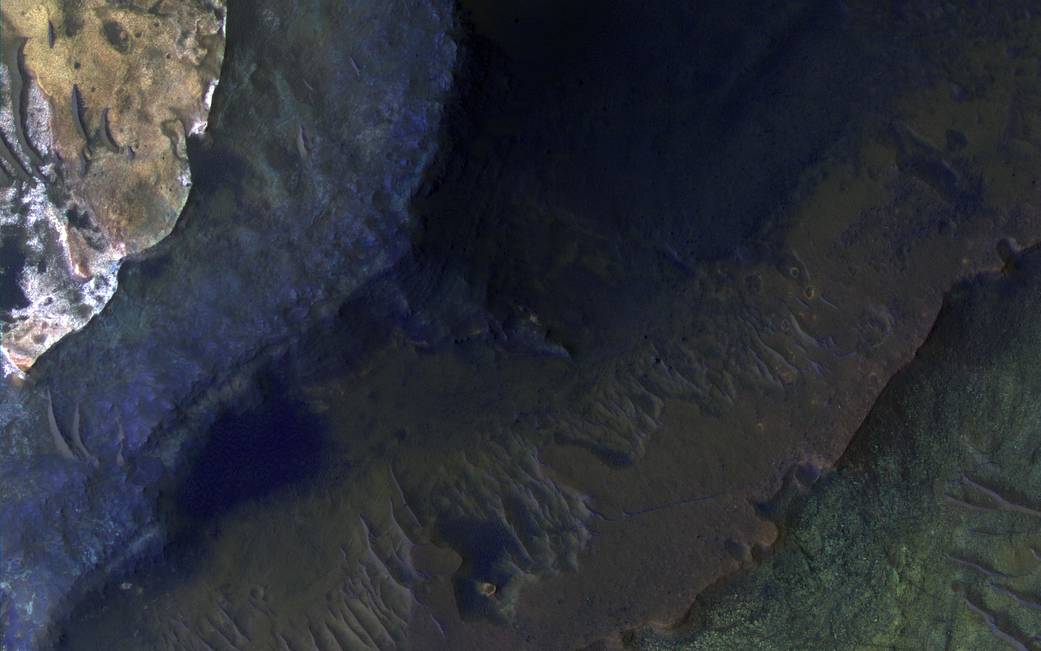 Capri Chasma is located in the eastern portion of the Valles Marineris canyon system, the largest known canyon system in the Solar System. Deeply incised canyons such as this are excellent targets for studying the Martian crust, as the walls may reveal many distinct types of bedrock.
This section of the canyon was targeted by HiRISE based on a previous spectral detection of hematite-rich deposits in the area. Hematite, a common iron-oxide mineral, was first identified here by the Mars Global Surveyor Thermal Emission Spectrometer (TES). In this TES image, red pixels indicate higher abundances of hematite, while the blue and green pixels represent different types of volcanic rocks (e.g., basalt).
Hematite in the Meridiani Planum region was also detected with the TES instrument (which we can see with the bright red spot on the Global TES mineral map). As a consequence, Meridiani Planum was the first landing site selected on Mars due to the spectral detection of a mineral that may have formed in the presence of liquid water.
Shortly after landing, the Opportunity rover detected the presence of hematite in the form of concretions called "blueberries." The blueberries are found in association with layers of sulfate salt-rich rocks. The salts are hypothesized to have formed through the raising and lowering of the groundwater table. During one such an event, the rock altered to form the hematite-rich blueberries. As the rock was eroded away, the more resistant hematite-rich blueberries were plucked out and concentrated on the plains as a "lag" deposit. Martian blueberries are observed to be scattered across the plains of Meridiani along Opportunity's traverse from Eagle Crater to Endeavor Crater, where Opportunity continues to explore after its mission began over 10 years ago.
This infrared-color image close-up highlights what is possibly the hematite-rich deposits nestled between different types of bedrock terraces in Capri Chasma. The bluish terrace is likely volcanic in origin, possibly basaltic, whereas the greenish rocks remain unidentified.
The central reddish terrace is possibly where some of the hematite may be concentrated. The higher elevation terrace with the lighter-colored materials is likely a sulfate-rich rock (based on CRISM data in the area). Given the presence of both sulfate salts and hematite in this area, akin to the deposits and associations explored by the Opportunity rover in Meridiani Planum, it might be that these materials in Capri Chasma may share a similar origin.
The yellow rectangular box shown on the TES spectral map outlines the corresponding location of the HiRISE image. Although the outline does not appear to contain a high hematite abundance, we note that the lower resolution of TES (about 3 to 6 kilometers per pixel) may exclude smaller exposures and finer sub-pixel details not-yet captured, but could be with HiRISE. A follow-up observation by the CRISM spectrometer may reveal additional details and a spectral signature for hematite in the vicinity at a finer resolution than TES.
The University of Arizona, Tucson, operates HiRISE, which was built by Ball Aerospace & Technologies Corp., Boulder, Colo. NASA's Jet Propulsion Laboratory, a division of Caltech in Pasadena, California, manages the Mars Reconnaissance Orbiter Project for NASA's Science Mission Directorate, Washington.
Editor: Tony Greicius