Where is the Ice on Ceres? New NASA Dawn Findings | NASA

Where is the Ice on Ceres?

NASA's Dawn spacecraft determined the hydrogen content of the upper yard, or meter, of Ceres' surface. Blue indicates where hydrogen content is higher, near the poles, while red indicates lower content at lower latitudes.
Credits: NASA/JPL-Caltech/UCLA/MPS/DLR/IDA/PSI
Full image and caption

This movie of images from NASA's Dawn spacecraft shows a crater on Ceres that is partly in shadow all the time. Such craters are called "cold traps." Dawn has shown that water ice could potentially be preserved in such place for very long amounts of time.
Credits: NASA/JPL-Caltech/UCLA/MPS/DLR/IDA
Full image and caption 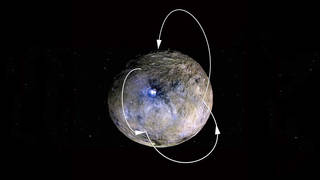