Dunes of the Southern Highlands | NASA 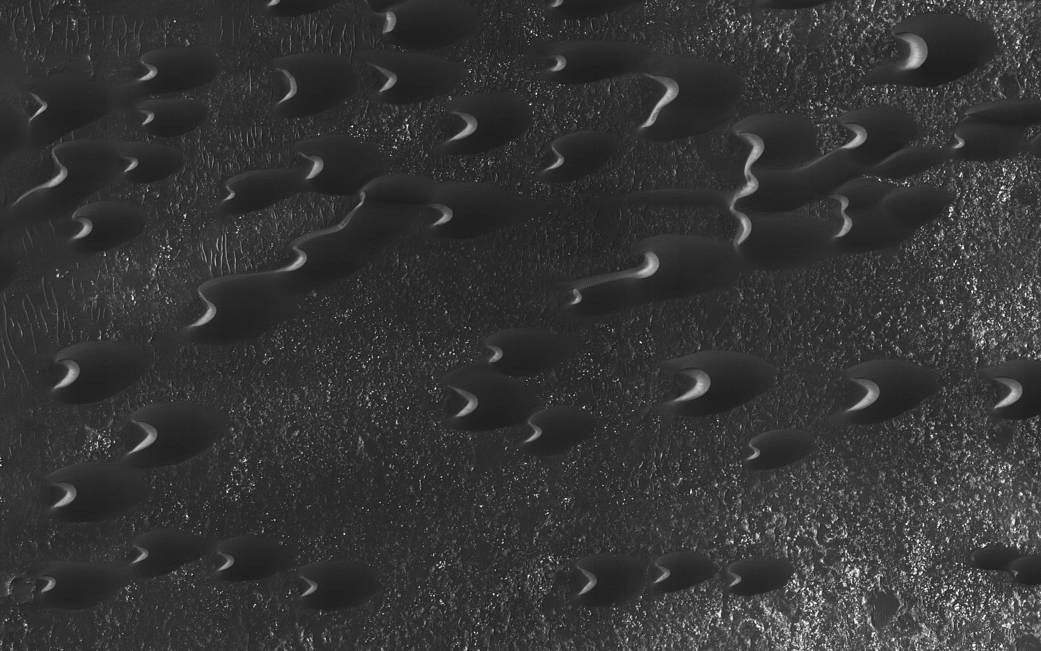 Sand dunes are scattered across Mars and one of the larger populations exists in the Southern hemisphere, just west of the Hellas impact basin. The Hellespontus region features numerous collections of dark, dune formations that collect both within depressions such as craters, and among "extra-crater" plains areas.
This image displays the middle portion of a large dune field composed primarily of crescent-shaped "barchan" dunes. Here, the steep, sunlit side of the dune, called a slip face, indicates the down-wind side of the dune and direction of its migration. Other long, narrow linear dunes known as "seif" dunes are also here and in other locales to the east.
NB: "Seif" comes from the Arabic word meaning "sword."
The map is projected here at a scale of 25 centimeters (9.8 inches) per pixel. [The original image scale is 25.5 centimeters (10 inches) per pixel (with 1 x 1 binning); objects on the order of 77 centimeters (30.3 inches) across are resolved.] North is up.
The University of Arizona, Tucson, operates HiRISE, which was built by Ball Aerospace & Technologies Corp., Boulder, Colo. NASA's Jet Propulsion Laboratory, a division of Caltech in Pasadena, California, manages the Mars Reconnaissance Orbiter Project for NASA's Science Mission Directorate, Washington.
Image credit: NASA/JPL-Caltech/Univ. of Arizona
Image download options
Editor: Tony Greicius
Publicado por salud equitativa en 5:46