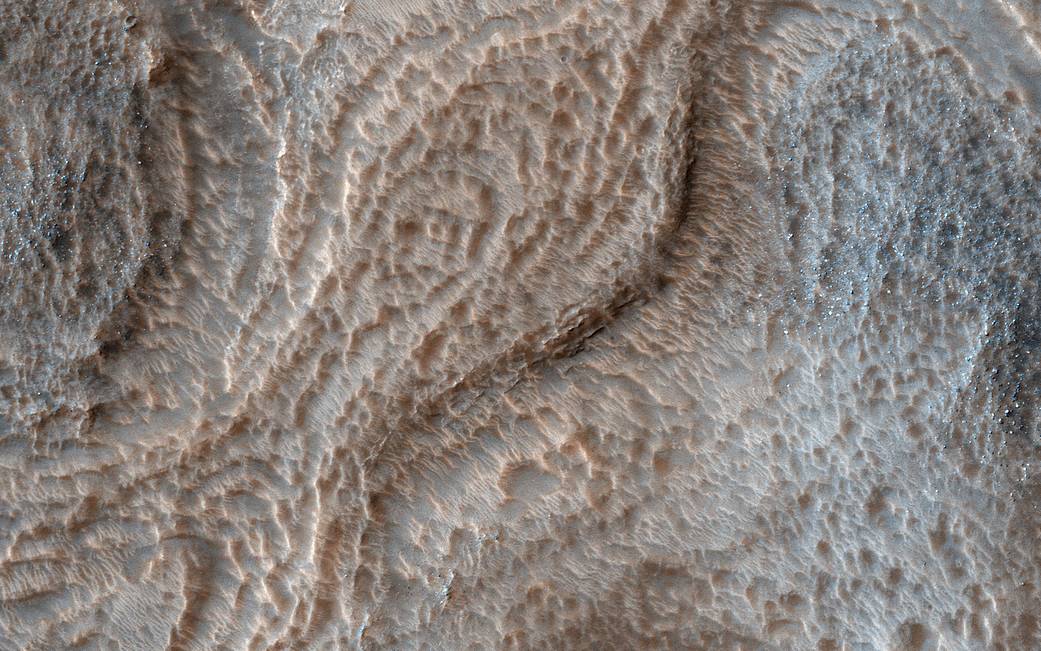 Hellas is an ancient impact structure and is the deepest and broadest enclosed basin on Mars. It measures about 2,300 kilometers across and the floor of the basin, Hellas Planitia, contains the lowest elevations on Mars.
The Hellas region can often be difficult to view from orbit due to seasonal frost, water-ice clouds and dust storms, yet this region is intriguing because of its diverse, and oftentimes bizarre, landforms.
This image from eastern Hellas Planitia shows some of the unusual features on the basin floor. These relatively flat-lying "cells" appear to have concentric layers or bands, similar to a honeycomb. This "honeycomb" terrain exists elsewhere in Hellas, but the geologic process responsible for creating these features remains unresolved.
The map is projected here at a scale of 50 centimeters (19.7 inches) per pixel. [The original image scale is 52.2 centimeters (20.6 inches) per pixel (with 2 x 2 binning); objects on the order of 157 centimeters (61.8 inches) across are resolved.] North is up.
The University of Arizona, Tucson, operates HiRISE, which was built by Ball Aerospace & Technologies Corp., Boulder, Colo. NASA's Jet Propulsion Laboratory, a division of Caltech in Pasadena, California, manages the Mars Reconnaissance Orbiter Project for NASA's Science Mission Directorate, Washington.
Image credit: NASA/JPL-Caltech/Univ. of Arizona
Image download options
Editor: Tony Greicius
Publicado por salud equitativa en 5:46