Astronomers have uncovered a supermassive black hole that has been propelled out of the center of a distant galaxy by what could be the awesome power of gravitational waves.
Though there have been several other suspected, similarly booted black holes elsewhere, none has been confirmed so far. Astronomers think this object, detected by NASA's Hubble Space Telescope, is a very strong case. Weighing more than 1 billion suns, the rogue black hole is the most massive black hole ever detected to have been kicked out of its central home.
The Hubble Space Telescope captured an image of a quasar named 3C 186 that is offset from the center of its galaxy. Astronomers hypothesize that this supermassive black hole was jettisoned from the center of its galaxy by the recoil from gravitational waves produced by the merging of two supermassive black holes.
Credits: NASA's Goddard Space Flight Center
Download this video in HD formats from NASA Goddard's Scientific Visualization Studio
Researchers estimate that it took the equivalent energy of 100 million supernovas exploding simultaneously to jettison the black hole. The most plausible explanation for this propulsive energy is that the monster object was given a kick by gravitational waves unleashed by the merger of two hefty black holes at the center of the host galaxy.
First predicted by Albert Einstein, gravitational waves are ripples in space that are created when two massive objects collide. The ripples are similar to the concentric circles produced when a hefty rock is thrown into a pond. Last year, the Laser Interferometer Gravitational-Wave Observatory (LIGO) helped astronomers prove that gravitational waves exist by detecting them emanating from the union of two stellar-mass black holes, which are several times more massive than the sun.
Hubble's observations of the wayward black hole surprised the research team. "When I first saw this, I thought we were seeing something very peculiar," said team leader Marco Chiaberge of the Space Telescope Science Institute (STScI) and Johns Hopkins University, in Baltimore, Maryland. "When we combined observations from Hubble, the Chandra X-ray Observatory, and the Sloan Digital Sky Survey, it all pointed towards the same scenario. The amount of data we collected, from X-rays to ultraviolet to near-infrared light, is definitely larger than for any of the other candidate rogue black holes." 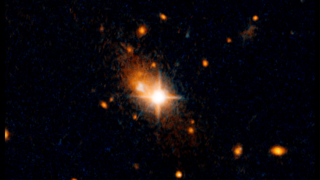 This image, taken by NASA's Hubble Space Telescope, reveals an unusual sight: a runaway quasar fleeing from its galaxy's central hub. A quasar is the visible, energetic signature of a black hole. Black holes cannot be observed directly, but they are the energy source at the heart of quasars — intense, compact gushers of radiation that can outshine an entire galaxy.
Credits: NASA, ESA, and M. Chiaberge (STScI and JHU)
Hubble images taken in visible and near-infrared light provided the first clue that the galaxy was unusual. The images revealed a bright quasar, the energetic signature of a black hole, residing far from the galactic core. Black holes cannot be observed directly, but they are the energy source at the heart of quasars - intense, compact gushers of radiation that can outshine an entire galaxy. The quasar, named 3C 186, and its host galaxy reside 8 billion light-years away in a galaxy cluster. The team discovered the galaxy's peculiar features while conducting a Hubble survey of distant galaxies unleashing powerful blasts of radiation in the throes of galaxy mergers.
"I was anticipating seeing a lot of merging galaxies, and I was expecting to see messy host galaxies around the quasars, but I wasn't really expecting to see a quasar that was clearly offset from the core of a regularly shaped galaxy," Chiaberge recalled. "Black holes reside in the center of galaxies, so it's unusual to see a quasar not in the center."
The team calculated the black hole's distance from the core by comparing the distribution of starlight in the host galaxy with that of a normal elliptical galaxy from a computer model. The black hole had traveled more than 35,000 light-years from the center, which is more than the distance between the sun and the center of the Milky Way.
Based on spectroscopic observations taken by Hubble and the Sloan survey, the researchers estimated the black hole's mass and measured the speed of gas trapped near the behemoth object. Spectroscopy divides light into its component colors, which can be used to measure velocities in space. "To our surprise, we discovered that the gas around the black hole was flying away from the galaxy's center at 4.7 million miles an hour," said team member Justin Ely of STScI. This measurement is also a gauge of the black hole's velocity, because the gas is gravitationally locked to the monster object.
The astronomers calculated that the black hole is moving so fast it would travel from Earth to the moon in three minutes. That's fast enough for the black hole to escape the galaxy in 20 million years and roam through the universe forever.
The Hubble image revealed an interesting clue that helped explain the black hole's wayward location. The host galaxy has faint arc-shaped features called tidal tails, produced by a gravitational tug between two colliding galaxies. This evidence suggests a possible union between the 3C 186 system and another galaxy, each with central, massive black holes that may have eventually merged.
Based on this visible evidence, along with theoretical work, the researchers developed a scenario to describe how the behemoth black hole could be expelled from its central home. According to their theory, two galaxies merge, and their black holes settle into the center of the newly formed elliptical galaxy. As the black holes whirl around each other, gravity waves are flung out like water from a lawn sprinkler. The hefty objects move closer to each other over time as they radiate away gravitational energy. If the two black holes do not have the same mass and rotation rate, they emit gravitational waves more strongly along one direction. When the two black holes collide, they stop producing gravitational waves. The newly merged black hole then recoils in the opposite direction of the strongest gravitational waves and shoots off like a rocket.
The researchers are lucky to have caught this unique event because not every black-hole merger produces imbalanced gravitational waves that propel a black hole in the opposite direction. "This asymmetry depends on properties such as the mass and the relative orientation of the back holes' rotation axes before the merger," said team member Colin Norman of STScI and Johns Hopkins University. "That's why these objects are so rare."
An alternative explanation for the offset quasar, although unlikely, proposes that the bright object does not reside within the galaxy. Instead, the quasar is located behind the galaxy, but the Hubble image gives the illusion that it is at the same distance as the galaxy. If this were the case, the researchers should have detected a galaxy in the background hosting the quasar.
If the researchers' interpretation is correct, the observations may provide strong evidence that supermassive black holes can actually merge. Astronomers have evidence of black-hole collisions for stellar-mass black holes, but the process regulating supermassive black holes is more complex and not completely understood.
The team hopes to use Hubble again, in combination with the Atacama Large Millimeter/submillimeter Array (ALMA) and other facilities, to more accurately measure the speed of the black hole and its gas disk, which may yield more insight into the nature of this bizarre object.
The Hubble Space Telescope is a project of international cooperation between NASA and ESA (European Space Agency). NASA's Goddard Space Flight Center in Greenbelt, Maryland, manages the telescope. The Space Telescope Science Institute in Baltimore conducts Hubble science operations. STScI is operated for NASA by the Association of Universities for Research in Astronomy, Inc., in Washington, D.C.
Contact:Donna Weaver / Ray VillardSpace Telescope Science Institute, Baltimore, Maryland410-338-4493 / 410-338-4514dweaver@stsci.edu / villard@stsci.edu
Marco ChiabergeSpace Telescope Science Institute andThe Johns Hopkins University, Baltimore, Maryland410-338-4980marcoc@stsci.edu
Editor: Karl Hille
Publicado por salud equitativa en 5:46