A grooved ridge called "Rocheport" on the rim of Mars' Endeavour Crater spans this scene from the Pancam on NASA's Mars rover Opportunity. The view extends from south-southeast on the left to north on the right. The site is near the southern end of an Endeavour rim segment called "Cape Tribulation."
Credits: NASA/JPL-Caltech/Cornell Univ./Arizona State Univ.
Full image and caption 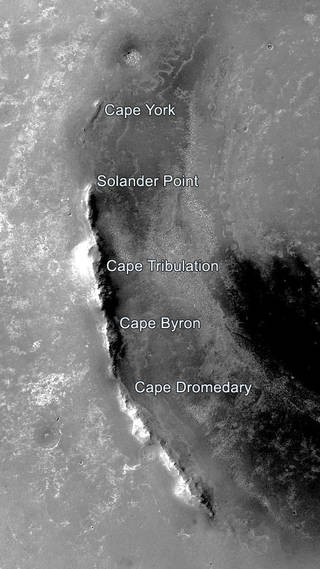 This image shows segments of the western rim of Mars' Endeavour Crater. NASA's Mars rover Opportunity has explored parts of the rim since 2011. The view covers an area about 9 miles wide. It was taken by the Context Camera on NASA's Mars Reconnaissance Orbiter.
Credits: NASA/JPL-Caltech/MSSS
Full image and caption
NASA's senior Mars rover, Opportunity, is departing "Cape Tribulation," a crater-rim segment it has explored since late 2014, southbound for its next destination, "Perseverance Valley."
The rover team plans observations in the valley to determine what type of fluid activity carved it billions of years ago: water, wind, or flowing debris lubricated by water.
A color panorama of a ridge called "Rocheport" provides both a parting souvenir of Cape Tribulation and also possible help for understanding the valley ahead. The view was assembled from multiple images taken by Opportunity's panoramic camera.
"The degree of erosion at Rocheport is fascinating," said Opportunity Deputy Principal Investigator Ray Arvidson, of Washington University in St. Louis. "Grooves run perpendicular to the crest line. They may have been carved by water or ice or wind. We want to see as many features like this on the way to Perseverance Valley as we can, for comparison with what we find there."
Perseverance Valley is about two football fields long. It cuts downward west to east across the western rim of Endeavour Crater. The crater is about 14 miles (22 kilometers) in diameter, with a segmented rim that exposes the oldest rocks ever investigated in place on Mars. Opportunity has less than four football fields' distance of driving to reach the top of the valley after departing Cape Tribulation, a raised segment about 3 miles (5 kilometers) long on the crater's western rim.
In 68 months since reaching Endeavour Crater, Opportunity has explored "Cape York," "Solander Point" and "Murray Ridge" before reaching Cape Tribulation about 30 months ago. "Cape Byron," the next raised segment to the south, contains Perseverance Valley and is separated from Tribulation by a gap of flatter ground.
Five drives totaling about 320 feet (98 meters) since the beginning of April have brought Opportunity to a boundary area where Cape Tribulation meets the plain surrounding the crater.
Cape Tribulation has been the site of significant events in the mission. There, in 2015, Opportunity surpassed a marathon-race distance of total driving since its 2004 landing on Mars. It climbed to the highest-elevation viewpoint it has reached on Endeavour's rim. In a region of Tribulation called "Marathon Valley," it investigated outcrops containing clay minerals that had been detected from orbit. There were some name-appropriate Tribulation experiences, as well. The rover team has coped with loss of reliability in Opportunity's non-volatile "flash" memory since 2015. With flash memory unavailable, each day's observations are lost if not radioed homeward the same day.
"From the Cape Tribulation departure point, we'll make a beeline to the head of Perseverance Valley, then turn left and drive down the full length of the valley, if we can," Arvidson said. "It's what you would do if you were an astronaut arriving at a feature like this: Start at the top, looking at the source material, then proceed down the valley, looking at deposits along the way and at the bottom."

A grooved ridge called "Rocheport" on the rim of Mars' Endeavour Crater spans this stereo scene from NASA's Mars rover Opportunity. The view combines images from left eye and right eye of the rover's Pancam to appear three-dimensional when seen through blue-red glasses with the red lens on the left.
Credits: NASA/JPL-Caltech/Cornell Univ./Arizona State Univ.
Full image and caption
Clues to how the valley was carved could come from the arrangement of different sizes of rocks and gravel in the deposits.
He said, "If it was a debris flow, initiated by a little water, with lots of rocks moving downhill, it should be a jumbled mess. If it was a river cutting a channel, we may see gravel bars, crossbedding, and what's called a 'fining upward' pattern of sediments, with coarsest rocks at the bottom."  Another pattern that could be evidence of flowing water would be if elongated pieces of gravel in a deposited bed tend to be stacked leaning in the same direction, providing a record of the downstream flow direction.
Now more than 13 years into a mission originally scheduled to last three months on Mars, Opportunity remains unexpectedly capable of continued exploration. It has driven about four-tenths of a mile (two-thirds of a kilometer) since the start of 2017, bringing the total traverse so far to 27.6 miles (44.4 kilometers). The current season on Mars is past the period when global dust storms might arise and curtail Opportunity's solar power.
Opportunity and the next-generation Mars rover, Curiosity, as well as three active NASA Mars orbiters, and surface missions to launch in 2018 and 2020 are all part of a legacy of robotic exploration which is helping to lay the groundwork for sending humans there in the 2030s. NASA's Jet Propulsion Laboratory, a division of Caltech in Pasadena, California, built Opportunity and manages the mission for NASA's Science Mission Directorate, Washington. For more information about Opportunity, visit:
http://www.nasa.gov/rovers
http://marsrovers.jpl.nasa.gov
Guy WebsterJet Propulsion Laboratory, Pasadena, Calif.818-354-6278guy.webster@jpl.nasa.gov
Laurie Cantillo / Dwayne BrownNASA Headquarters, Washington202-358-1077 / 202-358-1726laura.l.cantillo@nasa.gov / dwayne.c.brown@nasa.gov
2017-113
Editor: Tony Greicius
Publicado por salud equitativa en 11:11