Reveals Lull in the

Since the earliest days of our solar system’s history, asteroid impacts have shaped the planets and contributed to their evolution.  New research funded by NASA shows that Mars experienced ten times fewer giant impacts than some previous estimates.
The ancient surfaces of Mars, like those on the moon and Mercury, are covered with the scars of asteroid impacts.  The largest and most ancient giant impact basin on Mars, called Borealis, is nearly 6,000 miles wide and encompasses most of the northern hemisphere of the Red Planet.  A smaller giant basin called Hellas is 1,200 miles wide and five miles deep.
Scientists Bill Bottke from the Southwest Research Institute, or SwRI, and Jeff Andrews-Hanna from the University of Arizona have been investigating the early bombardment history of Mars and the timing of giant impacts.  While past theories have suggested other reasons, the new findings indicate that the Borealis basin carved out the northern lowlands 4.5 billion years ago, followed by a lull of 400 million years during which no giant impacts occurred, culminating in a shower of impacts between 4.1 and 3.8 billion years ago during which four giant basins and countless smaller craters formed.
For a recently published paper in Nature Geoscience about the topic, Bottke and Andrews-Hanna collected data and ran models to support their findings that the rim of Borealis was excavated by only one later giant basin, called Isidis.
“This sets strong statistical limits on the number of giant basins that could have formed on Mars after Borealis”, said Bottke, principal investigator of the Institute for the Science of Exploring Targets, or ISET, team with NASA’s Solar System Exploration Research Virtual Institute or SSERVI. “The number and timing of such giant impacts on early Mars has been debated, with estimates ranging from four to 30 giant basins formed in the time since Borealis.  Our work shows that the lower values are more likely.”
To fully understand the implications of this bombardment, the study also needed to constrain the timing of the impacts responsible for other giant basins, and compare their preservation state. The preservation state of the four youngest giant basins on Mars - Hellas, Isidis, Argyre, and the now-buried Utopia basins - are strikingly similar to the larger and older Borealis basin.  The similar preservation of both Borealis and these younger basins indicates that any basins formed during this time interval should be similarly preserved. 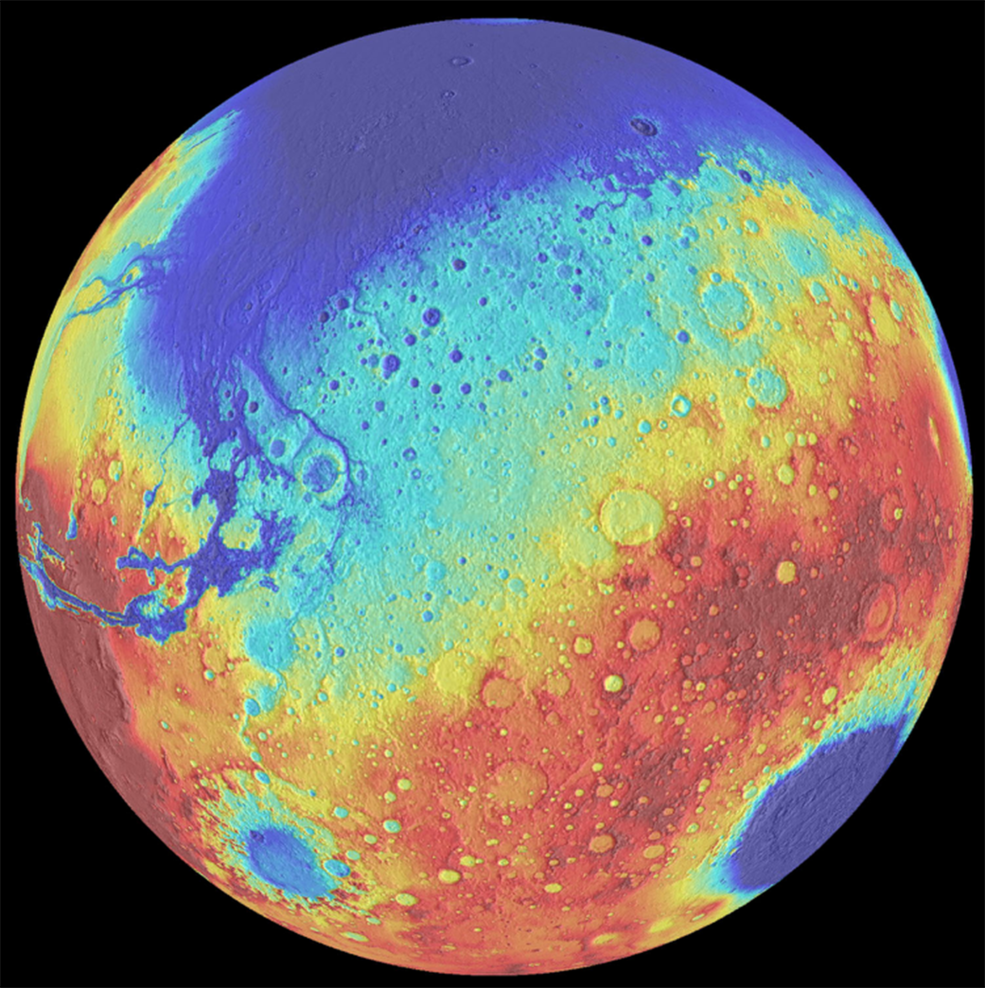 Mars bears the scars of five giant impacts, including the ancient giant Borealis basin (top of globe), Hellas (bottom right), and Argyre (bottom left). A NASA-funded team at SwRI discovered that Mars experienced a 400-million-year lull in impacts between the formation of Borealis and the younger basins.
Credits: University of Arizona/LPL/Southwest Research Institute
Previous studies used superposed smaller craters, resulting from the occurrence of impacts close enough together over time for newer craters to form atop older ones, to estimate that the ages of Hellas, Isidis, and Argyre were 3.8-4.1 billion years old. The ages of minerals found within Mars rocks that were blasted off the surface by impacts and came to Earth in the form of meteorites reveal the age of Borealis to be about 4.5 billion years old – nearly as old as Mars itself.
“The timing of these impacts requires two separate populations of objects striking Mars – one population that was part of the formation of the inner planets that died off early, and a second population striking the surface at a later time,” said Bottke. “We refer to the lull as the doldrums, which was then followed by a period of more intense bombardment commonly known as the Late Heavy Bombardment,” said Andrews-Hanna.
Bottke and Andrews-Hanna speculate that without giant impacts, release of gas from volcanoes may have built up a thicker atmosphere at this time, and the more stable surface conditions may have even been more hospitable to life.  Although much remains unknown about the earliest history of Mars, the results of the new study open a window into Mars’ tumultuous past.
The ISET is a research team managed by SSERVI. Located at NASA’s Ames Research Center in California’s Silicon Valley, SSERVI is funded by the agency’s Science Mission Directorate and Human Exploration and Operations Mission Directorate, and manages national and international collaborative partnerships, designed to push the boundaries of science and exploration.
For more information about SSERVI and selected member teams, visit:
http://sservi.nasa.gov
Kimberly WilliamsAmes Research Center, California's Silicon Valley650-604-2457kimberly.k.williams@nasa.gov
Editor: Kimberly Williams
Publicado por salud equitativa en 7:08