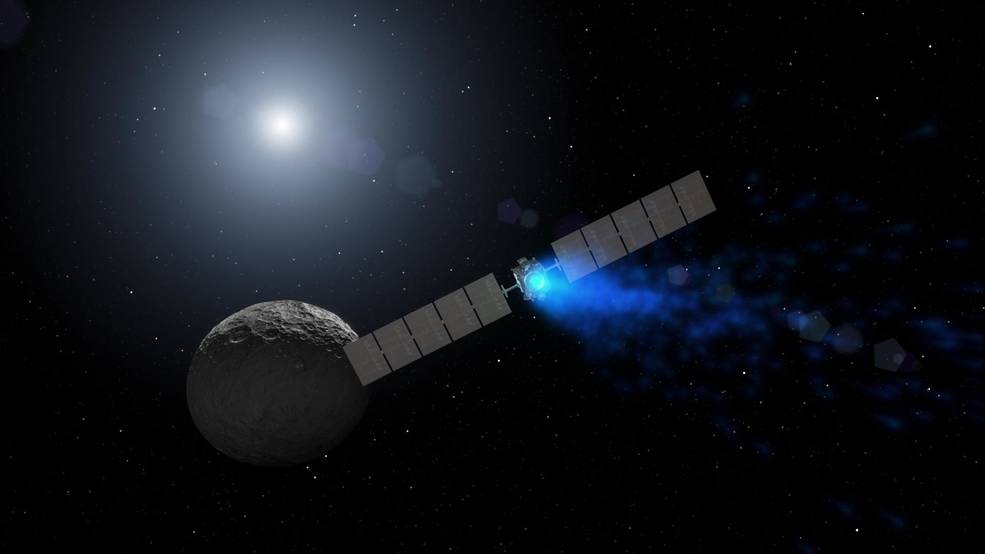 This artist's rendering shows NASA's Dawn spacecraft maneuvering above Ceres with its ion propulsion system.
Credits: NASA/JPL-Caltech
Mission Status Report
NASA's Dawn spacecraft is preparing to observe Ceres on April 29 from an "opposition" position, directly between the dwarf planet’s mysterious Occator Crater and the sun. This unique geometry may yield new insights about the bright material in the center of the crater.
While preparing for this observation, one of Dawn's two remaining reaction wheels stopped functioning on April 23. By electrically changing the speed at which these gyroscope-like devices spin, Dawn controls its orientation in the zero-gravity, frictionless conditions of space.
The team discovered the situation during a scheduled communications session on April 24, diagnosed the problem, and returned the spacecraft to its standard flight configuration, still with hydrazine control, on April 25. The failure occurred after Dawn completed its five-hour segment of ion thrusting on April 22 to adjust its orbit, but before the shorter maneuver scheduled for April 23-24. The orbit will still allow Dawn to perform its opposition measurements. The reaction wheel's malfunctioning will not significantly impact the rest of the extended mission at Ceres.
Dawn completed its prime mission in June 2016, and is now in an extended mission. It has been studying Ceres for more than two years, and before that, the spacecraft orbited giant asteroid Vesta, sending back valuable data and images. Dawn launched in 2007.
The Dawn operations team has been well prepared to deal with the loss of the reaction wheel. The spacecraft is outfitted with four reaction wheels. It experienced failures of one of the wheels in 2010, a year before it entered orbit around Vesta, and another in 2012, as it was completing its exploration of that fascinating world. (See issues with these devices). When a third reaction wheel stopped working this week, the spacecraft correctly responded by entering one of its safe modes and assigning control of its orientation to its hydrazine thrusters.
Today, Dawn's elliptical orbit will bring it from an altitude of 17,300 miles (27,900 kilometers) to 15,800 miles (25,400 kilometers) above Ceres.
The Dawn mission is managed by NASA's Jet Propulsion Laboratory in Pasadena, California, for NASA's Science Mission Directorate in Washington. Dawn is a project of the directorate's Discovery Program, managed by NASA's Marshall Space Flight Center in Huntsville, Alabama. UCLA is responsible for overall Dawn mission science. Orbital ATK Inc., in Dulles, Virginia, designed and built the spacecraft. The German Aerospace Center, Max Planck Institute for Solar System Research, Italian Space Agency and Italian National Astrophysical Institute are international partners on the mission team. For a complete list of mission participants, visit: https://dawn.jpl.nasa.gov/mission
More information about Dawn is available at the following sites:
https://www.nasa.gov/dawn
https://dawn.jpl.nasa.gov
Elizabeth LandauJet Propulsion Laboratory, Pasadena, Calif.818-354-6425elizabeth.landau@jpl.nasa.gov
2017-125
Editor: Tony Greicius
Publicado por salud equitativa en 7:15