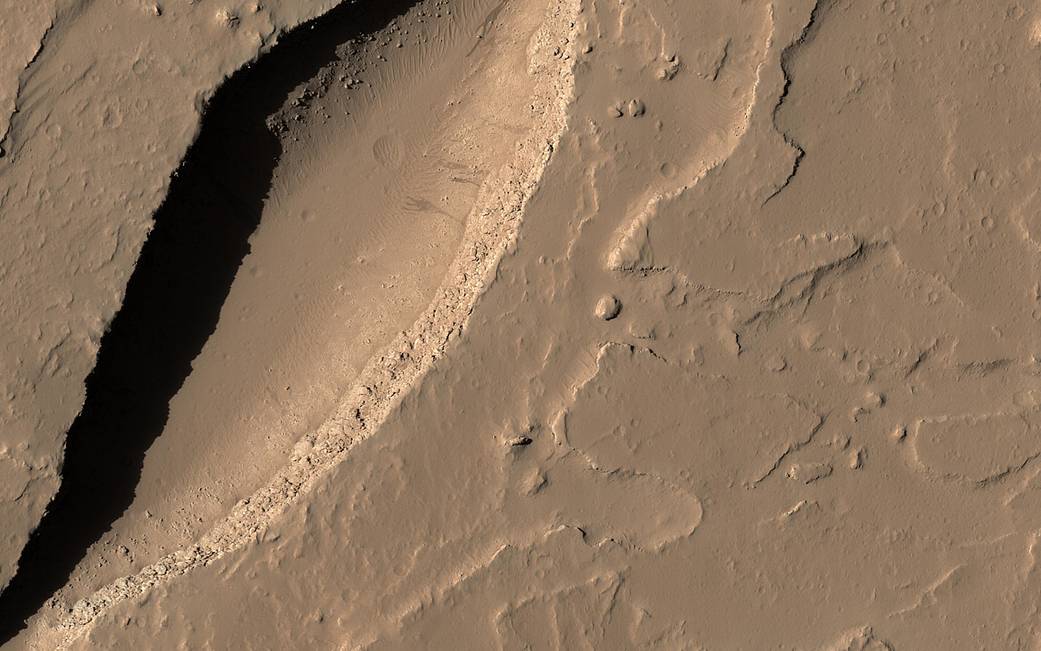 Although Mars is known for having the largest volcano in our solar system, Olympus Mons, we also find small-scale volcanic features on its surface, as shown in this image from HiRISE onboard NASA's Mars Reconnaissance Orbiter (MRO).
This fissure, less than 500 meters across at its widest point, lies in the Tharsis region and is believed to be a vent from which lava flowed in ancient eruptions.
The total volume of lava released from this fissure is much less than what would erupt from nearby volcanoes, but the mark left on the landscape is dramatic nonetheless.
This is a stereo pair with This is a stereo pair with ESP_019325_1960.
The map is projected here at a scale of 50 centimeters (19.7 inches) per pixel. [The original image scale is 56.8 centimeters (22.4 inches) per pixel (with 2 x 2 binning); objects on the order of 170 centimeters (67 inches) across are resolved.] North is up.
The University of Arizona, Tucson, operates HiRISE, which was built by Ball Aerospace & Technologies Corp., Boulder, Colo. NASA's Jet Propulsion Laboratory, a division of Caltech in Pasadena, California, manages the Mars Reconnaissance Orbiter Project for NASA's Science Mission Directorate, Washington.
Image credit: NASA/JPL-Caltech/Univ. of Arizona
Editor: Tony Greicius
Publicado por salud equitativa en 8:02