Mars and the Amazing 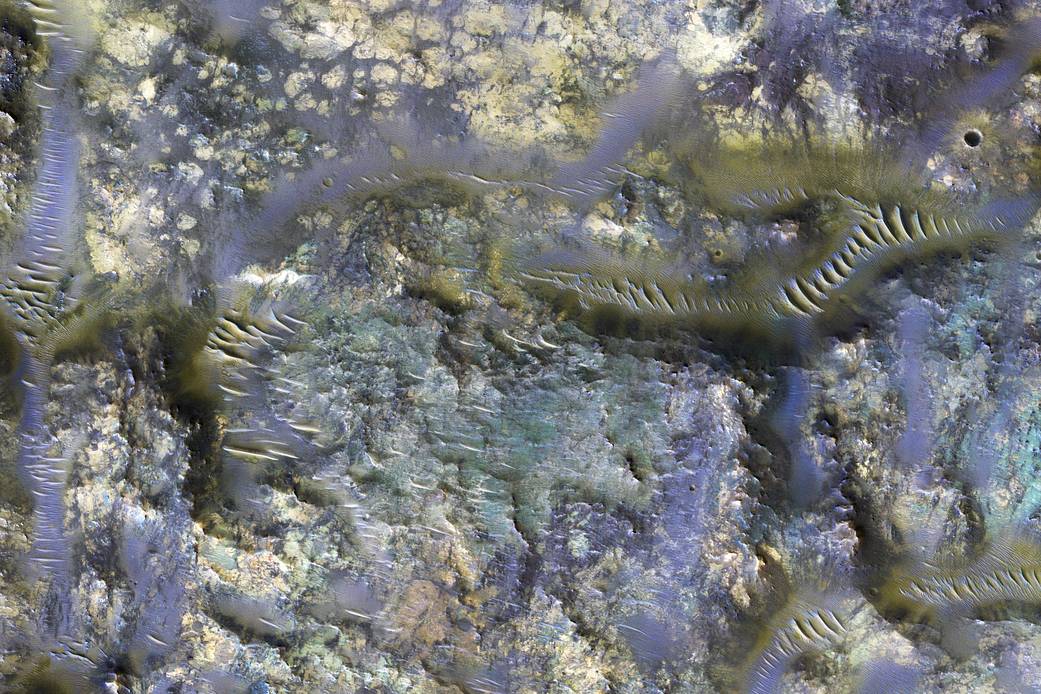 This image from NASA's Mars Reconnaissance Orbiter shows the exposed bedrock of an ejecta blanket of an unnamed crater in the Mare Serpentis region of Mars. Ejecta, when exposed, are truly an eye-opening feature, as they reveal the sometimes exotic subsurface, and materials created by impacts (close-up view). This ejecta shares similarities to others found elsewhere on Mars, which are of particular scientific interest for the extent of exposure and diverse colors. (For example, the Hargraves Crater ejecta, in the Nili Fossae trough region, was once considered as a candidate landing site for the next NASA Mars rover 2020.)
The colors observed in this picture represent different rocks and minerals, now exposed on the surface. Blue in HiRISE infrared color images generally depicts iron-rich minerals, like olivine and pyroxene. Lighter colors, such as yellow, indicate the presence of altered rocks.
The possible sources of the ejecta is most likely from two unnamed craters. How do we determine which crater deposited the ejecta?
A full-scale image shows numerous linear features that are observed trending in an east-west direction. These linear features indicate the flow direction of the ejecta from its unnamed host crater. Therefore, if we follow them, we find that they emanate from the bottom of the two unnamed craters. If the ejecta had originated from the top crater, then we would expect the linear features at the location of our picture to trend northwest to southeast.
The map is projected here at a scale of 50 centimeters (19.7 inches) per pixel. [The original image scale is 50.8 centimeters (20 inches) per pixel (with 2 x 2 binning); objects on the order of 153 centimeters (60.2 inches) across are resolved.] North is up.
The University of Arizona, Tucson, operates HiRISE, which was built by Ball Aerospace & Technologies Corp., Boulder, Colo. NASA's Jet Propulsion Laboratory, a division of Caltech in Pasadena, California, manages the Mars Reconnaissance Orbiter Project for NASA's Science Mission Directorate, Washington.
Editor: Martin Perez
Publicado por salud equitativa en 7:14