Animated illustration showing the the solar wind streaming around Earth's magnetosphere. Near the North and South Poles, Earth's magnetic field forms funnels that allow the solar wind access to the upper atmosphere.
Credits: NASA/CILab/Josh Masters
UPDATE November 26, 2019: A Terrier-Improved Malemute sounding rocket carrying the Investigation of Cusp Irregularities-5 or ICI-5 payload was launched from Ny-Alesund, Svalbard, at 2:43 a.m. EST (8:43 a.m. local-Norway), Tuesday, Nov. 26, 2019.  The rocket carried the payload to 157 miles altitude.  Preliminary data shows that the mission did not perform as planned and is under review.
Each second, 1.5 million tons of solar material shoot off of the Sun and out into space, traveling at hundreds of miles per second. Known as the solar wind, this incessant stream of plasma, or electrified gas, has pelted Earth for more than 4 billion years. Thanks to our planet’s magnetic field, it’s mostly deflected away. But head far enough north, and you’ll find the exception.
“Most of Earth is shielded from the solar wind,” said Mark Conde, space physicist as the University of Alaska, Fairbanks. “But right near the poles, in the midday sector, our magnetic field becomes a funnel where the solar wind can get all the way down to the atmosphere.”
These funnels, known as the polar cusps, can cause some trouble. The influx of solar wind disturbs the atmosphere, disrupting satellites and radio and GPS signals. Beginning Nov. 25, 2019, three new NASA-supported missions will launch into the northern polar cusp, aiming to improve the technology affected by it.

The three missions are all part of the Grand Challenge Initiative – Cusp, a series of nine sounding rocket missions exploring the polar cusp. Sounding rockets are a type of space vehicle that makes 15-minute flights into space before falling back to Earth. Standing up to 65 feet tall and flying anywhere from 20 to 800 miles high, sounding rockets can be aimed and fired at moving targets with only a few minutes notice. This flexibility and precision make them ideal for capturing the strange phenomena inside the cusp.
Two of the three upcoming missions will study the same anomaly: a patch of atmosphere inside the cusp notably denser than its surroundings. It was discovered in 2004, when scientists noticed that part of the atmosphere inside the cusp was about 1.5 times heavier than expected.

Video from CREX's last flight, showing vapor tracers following high-altitude polar winds. Both CREX-2 and CHI missions will use a similar methodology to track winds thought to support the density enhancement inside the cusp.
Credits: NASA/CREX/Mark Conde
“A little extra mass 200 miles up might seem like no big deal,” said Conde, the principal investigator for the Cusp Region Experiment-2, or CREX-2, mission. "But the pressure change associated with this increased mass density, if it occurred at ground level, would cause a continuous hurricane stronger than anything seen in meteorological records.”
This additional mass creates problems for spacecraft flying through it, like the many satellites that follow a polar orbit. Passing through the dense patch can shake up their trajectories, making close encounters with other spacecraft or orbital debris riskier than they would otherwise be.
“A small change of a few hundred meters can make the difference between having to do an evasive maneuver, or not,” Conde said.
Both CREX-2 and Cusp Heating Investigation, or CHI mission, led by Miguel Larsen of Clemson University in South Carolina, will study this heavy patch of atmosphere to better predict its effects on satellites passing through. “Each mission has its own strengths, but ideally, they’ll be launched together,” Larsen said.

It’s not just spacecraft that behave unpredictably near the cusp – so do the GPS and communications signals they transmit. The culprit, in many cases, is atmospheric turbulence.
“Turbulence is one of the really hard remaining questions in classical physics,” said Jøran Moen, space physicist at the University of Oslo. “We don’t really know what it is because we have no direct measurements yet.”
Moen, who is leading the Investigation of Cusp Irregularities-5 or ICI-5 mission, likens turbulence to the swirling eddies that form when rivers rush around rocks. When the atmosphere grows turbulent, GPS and communication signals passing through it can become garbled, sending unreliable signals to the planes and ships that depend on them. 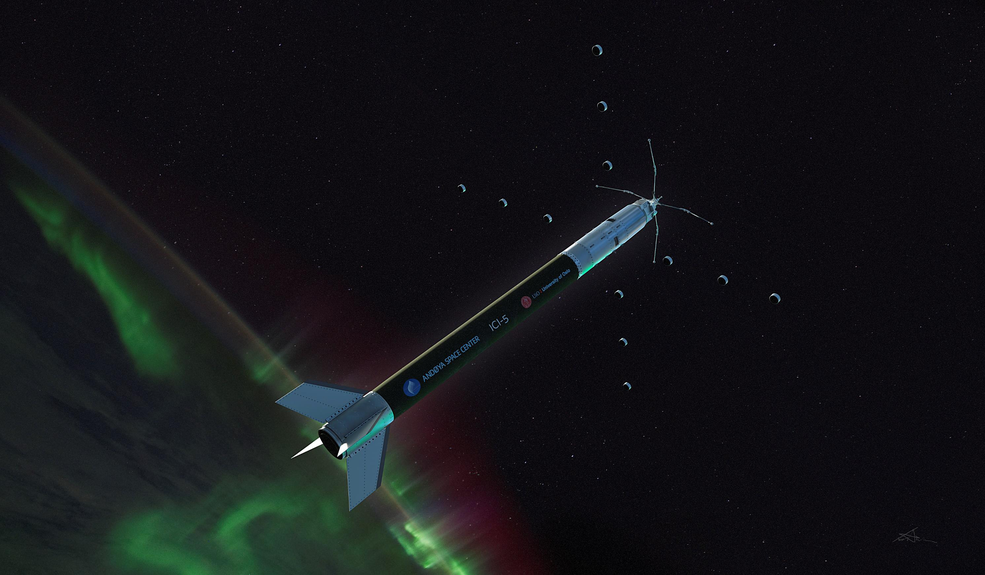 Illustration of the ICI-5 rocket deploying its 12 daughter payloads. Once in space, these additional sensors will help scientists distinguish turbulence from waves, both of which could be the cause of corrupted communication signals.
Credits: Andøya Space Center/Trond Abrahamsen
Moen hopes to make the first measurements to distinguish true turbulence from electric waves that can also disrupt communication signals. Though both processes have similar effects on GPS, figuring out which phenomenon drives these disturbances is critical to predicting them.
“The motivation is to increase the integrity of the GPS signals,” Moen said. “But we need to know the driver to forecast when and where these disturbances will occur.”

The extreme North provides a pristine locale for examining physics much harder to study elsewhere. The tiny arctic town on Svalbard, the Norwegian archipelago from which the ICI-5 and CHI rockets will launch, has a small population and strict restrictions on the use of radio or Wi-Fi, creating an ideal laboratory environment for science.
“Turbulence occurs in many places, but it’s better to go to this laboratory that is not contaminated by other processes,” Moen said. “The ‘cusp laboratory’ — that’s Svalbard.”
Ideally, the CHI rocket would launch from Svalbard at nearly the same time that CREX-2 launches from Andenes, Norway. The ICI-5 rocket, on a second launcher in Svalbard, would fly soon after. But the timing can be tricky: Andenes is 650 miles south of Svalbard, and can experience different weather. “It’s not a requirement, but launching together would certainly multiply the scientific returns of the missions,” Conde said.
Keeping a constant eye on the weather, waiting for the right moment to launch, is a key part of launching rockets — even part of the draw.
“It really is an all-consuming thing,” Conde said. “All you do when you’re out there is watch conditions and talk about the rocket and decide what you would do.”
Related:
Banner Image: Earth’s magnetosphere, showing the northern and southern polar cusps. Credit: Andøya Space Center/Trond Abrahamsen
By Miles Hatfield
NASA’s Goddard Space Flight Center, Greenbelt, Md.
Editor: Miles Hatfield
Publicado por salud equitativa en 7:24