Side-by-side movies shows how the 2018 global dust storm enveloped the Red Planet, courtesy of the Mars Color Imager (MARCI) camera onboard NASA's Mars Reconnaissance Orbiter (MRO). This global dust storm caused NASA's Opportunity rover to lose contact with Earth.
Credits: NASA/JPL-Caltech/MSSS
Full image and caption
Dust storms are common on Mars. But every decade or so, something unpredictable happens: A series of runaway storms breaks out, covering the entire planet in a dusty haze.
Last year, a fleet of NASA spacecraft got a detailed look at the life cycle of the 2018 global dust storm that ended the Opportunity rover's mission. And while scientists are still puzzling over the data, two papers recently shed new light on a phenomenon observed within the storm: dust towers, or concentrated clouds of dust that warm in sunlight and rise high into the air. Scientists think that dust-trapped water vapor may be riding them like an elevator to space, where solar radiation breaks apart their molecules. This might help explain how Mars' water disappeared over billions of years.
Dust towers are massive, churning clouds that are denser and climb much higher than the normal background dust in the thin Martian atmosphere. While they also occur under normal conditions, the towers appear to form in greater numbers during global storms.
A tower starts at the planet's surface as an area of rapidly lifted dust about as wide as the state of Rhode Island. By the time a tower reaches a height of 50 miles (80 kilometers), as seen during the 2018 global dust storm, it may be as wide as Nevada. As the tower decays, it can form a layer of dust 35 miles (56 kilometers) above the surface that can be wider than the continental United States. 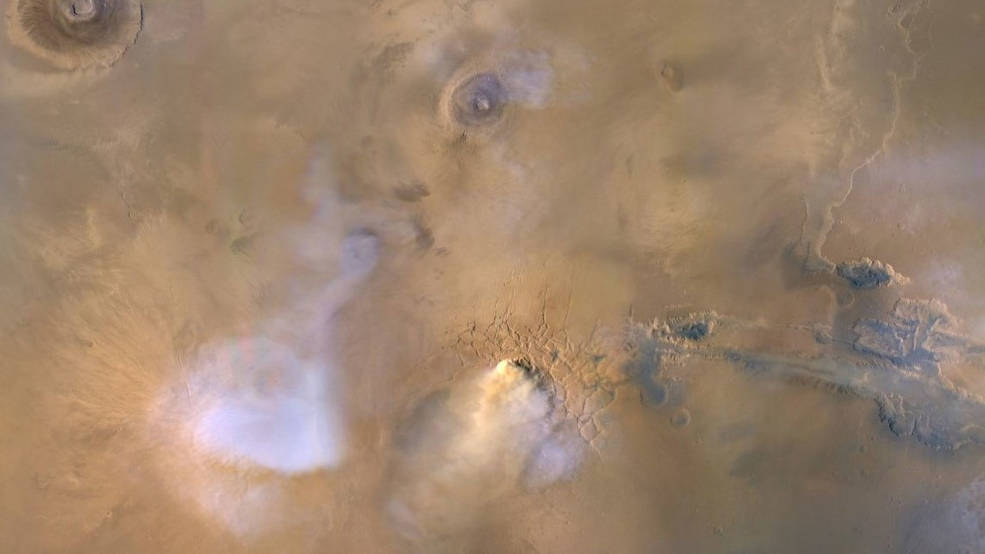 The yellow-white cloud in the bottom-center of this image is a Mars "dust tower" — a concentrated cloud of dust that can be lofted dozens of miles above the surface. The blue-white plumes are water vapor clouds. This image was taken on Nov. 30, 2010, by NASA's Mars Reconnaissance Orbiter.
Credits: NASA/JPL-Caltech/MSSS
The recent findings on dust towers come courtesy of NASA's Mars Reconnaissance Orbiter (MRO), which is led by the agency's Jet Propulsion Laboratory in Pasadena, California. Though global dust storms cloak the planet's surface, MRO can use its heat-sensing Mars Climate Sounder instrument to peer through the haze. The instrument is designed specifically for measuring dust levels. Its data, coupled with images from a camera aboard the orbiter called the Mars Context Imager (MARCI), enabled scientists to detect numerous swelling dust towers.
How Did Mars Lose Its Water?
Dust towers appear throughout the Martian year, but MRO observed something different during the 2018 global dust storm. "Normally the dust would fall down in a day or so," said the paper's lead author, Nicholas Heavens of Hampton University in Hampton, Virginia. "But during a global storm, dust towers are renewed continuously for weeks." In some cases, multiple towers were seen for as long as 3 1/2 weeks.
The rate of dust activity surprised Heavens and other scientists. But especially intriguing is the possibility that dust towers act as "space elevators" for other material, transporting them through the atmosphere. When airborne dust heats up, it creates updrafts that carry gases along with it, including the small quantity of water vapor sometimes seen as wispy clouds on Mars.
A previous paper led by Heavens showed that during a 2007 global dust storm on Mars, water molecules were lofted into the upper atmosphere, where solar radiation could break them down into particles that escape into space. That might be a clue to how the Red Planet lost its lakes and rivers over billions of years, becoming the freezing desert it is today.
Scientists can't say with certainty what causes global dust storms; they've studied fewer than a dozen to date.
"Global dust storms are really unusual," said Mars Climate Sounder scientist David Kass of JPL. "We really don't have anything like this on the Earth, where the entire planet's weather changes for several months."
With time and more data, the MRO team hopes to better understand the dust towers created within global storms and what role they may play in removing water from the Red Planet's atmosphere.
For more information about MRO:
https://mars.nasa.gov/mro/
https://www.nasa.gov/mission_pages/MRO/main/index.html
Andrew GoodJet Propulsion Laboratory, Pasadena, Calif.818-393-2433andrew.c.good@jpl.nasa.gov
Alana JohnsonNASA Headquarters, Washington202-358-1501alana.r.johnson@nasa.gov
2019-235
Editor: Tony Greicius
Publicado por salud equitativa en 4:34