A new statistical study of planets found by a technique called gravitational microlensing suggests that Neptune-mass worlds are likely the most common type of planet to form in the icy outer realms of planetary systems. The study provides the first indication of the types of planets waiting to be found far from a host star, where scientists suspect planets form most efficiently.
Neptune-mass worlds are likely the most common type in the outer realms of planetary systems
Credits: NASA's Goddard Space Flight Center
This video can be downloaded from the Scientific Visualization Studio.
"We've found the apparent sweet spot in the sizes of cold planets. Contrary to some theoretical predictions, we infer from current detections that the most numerous have masses similar to Neptune, and there doesn't seem to be the expected increase in number at lower masses," said lead scientist Daisuke Suzuki, a post-doctoral researcher at NASA's Goddard Space Flight Center in Greenbelt, Maryland, and the University of Maryland Baltimore County. "We conclude that Neptune-mass planets in these outer orbits are about 10 times more common than Jupiter-mass planets in Jupiter-like orbits."
Gravitational microlensing takes advantage of the light-bending effects of massive objects predicted by Einstein's general theory of relativity. It occurs when a foreground star, the lens, randomly aligns with a distant background star, the source, as seen from Earth. As the lensing star drifts along in its orbit around the galaxy, the alignment shifts over days to weeks, changing the apparent brightness of the source. The precise pattern of these changes provides astronomers with clues about the nature of the lensing star, including any planets it may host. 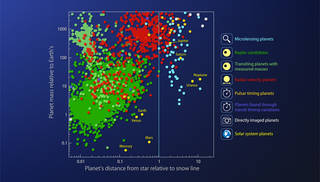 This graph plots 4,769 exoplanets and planet candidates according to their masses and relative distances from the snow line, the point where water and other materials freeze solid (vertical cyan line). Gravitational microlensing is particularly sensitive to planets in this region. Planets are shaded according to the discovery technique listed at right. Masses for unconfirmed planetary candidates from NASA's Kepler mission are calculated based on their sizes. For comparison, the graph also includes the planets of our solar system.
Credits: NASA's Goddard Space Flight Center
"We mainly determine the mass ratio of the planet to the host star and their separation," said team member David Bennett, an astrophysicist at Goddard. "For about 40 percent of microlensing planets, we can determine the mass of the host star and therefore the mass of the planet."
More than 50 exoplanets have been discovered using microlensing compared to thousands detected by other techniques, such as detecting the motion or dimming of a host star caused by the presence of planets. Because the necessary alignments between stars are rare and occur randomly, astronomers must monitor millions of stars for the tell-tale brightness changes that signal a microlensing event.
However, microlensing holds great potential. It can detect planets hundreds of times more distant than most other methods, allowing astronomers to investigate a broad swath of our Milky Way galaxy. The technique can locate exoplanets at smaller masses and greater distances from their host stars, and it's sensitive enough to find planets floating through the galaxy on their own, unbound to stars.
NASA's Kepler and K2 missions have been extraordinarily successful in finding planets that dim their host stars, with more than 2,500 confirmed discoveries to date. This technique is sensitive to close-in planets but not more distant ones. Microlensing surveys are complementary, best probing the outer parts of planetary systems with less sensitivity to planets closer to their stars.
"Combining microlensing with other techniques provides us with a clearer overall picture of the planetary content of our galaxy," said team member Takahiro Sumi at Osaka University in Japan.
From 2007 to 2012, the Microlensing Observations in Astrophysics (MOA) group, a collaboration between researchers in Japan and New Zealand, issued 3,300 alerts informing the astronomical community about ongoing microlensing events. Suzuki's team identified 1,474 well-observed microlensing events, with 22 displaying clear planetary signals. This includes four planets that were never previously reported.
To study these events in greater detail, the team included data from the other major microlensing project operating over the same period, the Optical Gravitational Lensing Experiment (OGLE), as well as additional observations from other projects designed to follow up on MOA and OGLE alerts.
From this information, the researchers determined the frequency of planets compared to the mass ratio of the planet and star as well as the distances between them. For a typical planet-hosting star with about 60 percent the sun's mass, the typical microlensing planet is a world between 10 and 40 times Earth's mass. For comparison, Neptune in our own solar system has the equivalent mass of 17 Earths.
The results imply that cold Neptune-mass worlds are likely to be the most common types of planets beyond the so-called snow line, the point where water remained frozen during planetary formation. In the solar system, the snow line is thought to have been located at about 2.7 times Earth's mean distance from the sun, placing it in the middle of the main asteroid belt today. 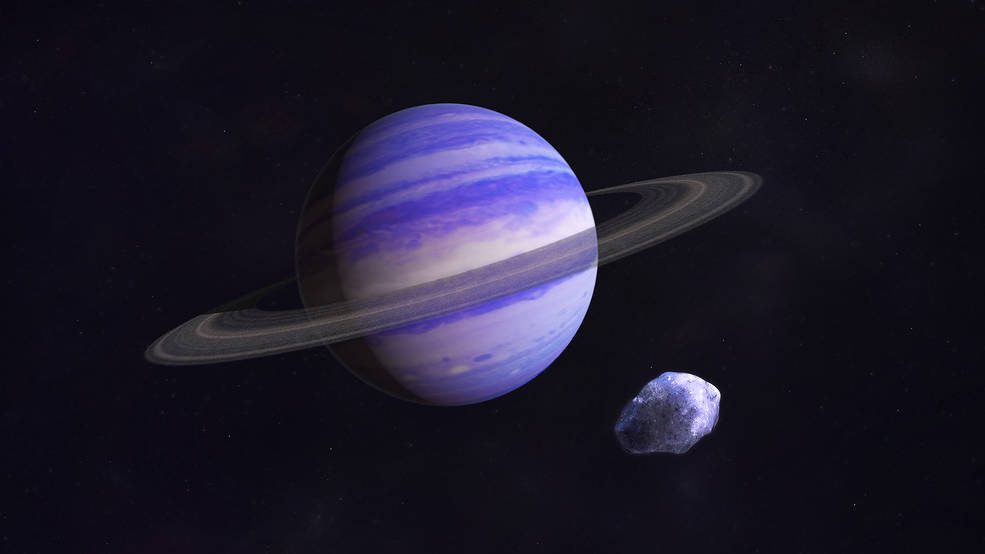 Neptune-mass exoplanets like the one shown in this artist's rendering may be the most common in the icy regions of planetary systems. Beyond a certain distance from a young star, water and other substances remain frozen, leading to an abundant population of icy objects that can collide and form the cores of new planets. In the foreground, an icy body left over from this period drifts past the planet.
Credits: NASA/Goddard/Francis Reddy
A paper detailing the findings was published in The Astrophysical Journal on Dec. 13.
"Beyond the snow line, materials that were gaseous closer to the star condense into solid bodies, increasing the amount of material available to start the planet-building process," said Suzuki. "This is where we think planetary formation was most efficient, and it's also the region where microlensing is most sensitive."
NASA's Wide Field Infrared Survey Telescope (WFIRST), slated to launch in the mid-2020s, will conduct an extensive microlensing survey. Astronomers expect it will deliver mass and distance determinations of thousands of planets, completing the work begun by Kepler and providing the first galactic census of planetary properties.
NASA's Ames Research Center manages the Kepler and K2 missions for NASA's Science Mission Directorate. The Jet Propulsion Laboratory (JPL) in Pasadena, California, managed Kepler mission development. Ball Aerospace & Technologies Corporation operates the flight system with support from the Laboratory for Atmospheric and Space Physics at the University of Colorado in Boulder.
WFIRST is managed at Goddard, with participation by JPL, the Space Telescope Science Institute in Baltimore, the Infrared Processing and Analysis Center, also in Pasadena, and a science team comprising members from U.S. research institutions across the country.
For more information on how NASA’s Kepler is working with ground-based efforts, including the MOA and OGLE groups, to search for planets using microlensing, please visit:
https://www.nasa.gov/feature/ames/kepler/searching-for-far-out-and-wandering-worlds/
By Francis Reddy
NASA's Goddard Space Flight Center in Greenbelt, Maryland
Editor: Karl Hille
Publicado por salud equitativa en 4:32