Early Black Holes May Have Grown in Fits and Spurts | NASA

May Have Grown in 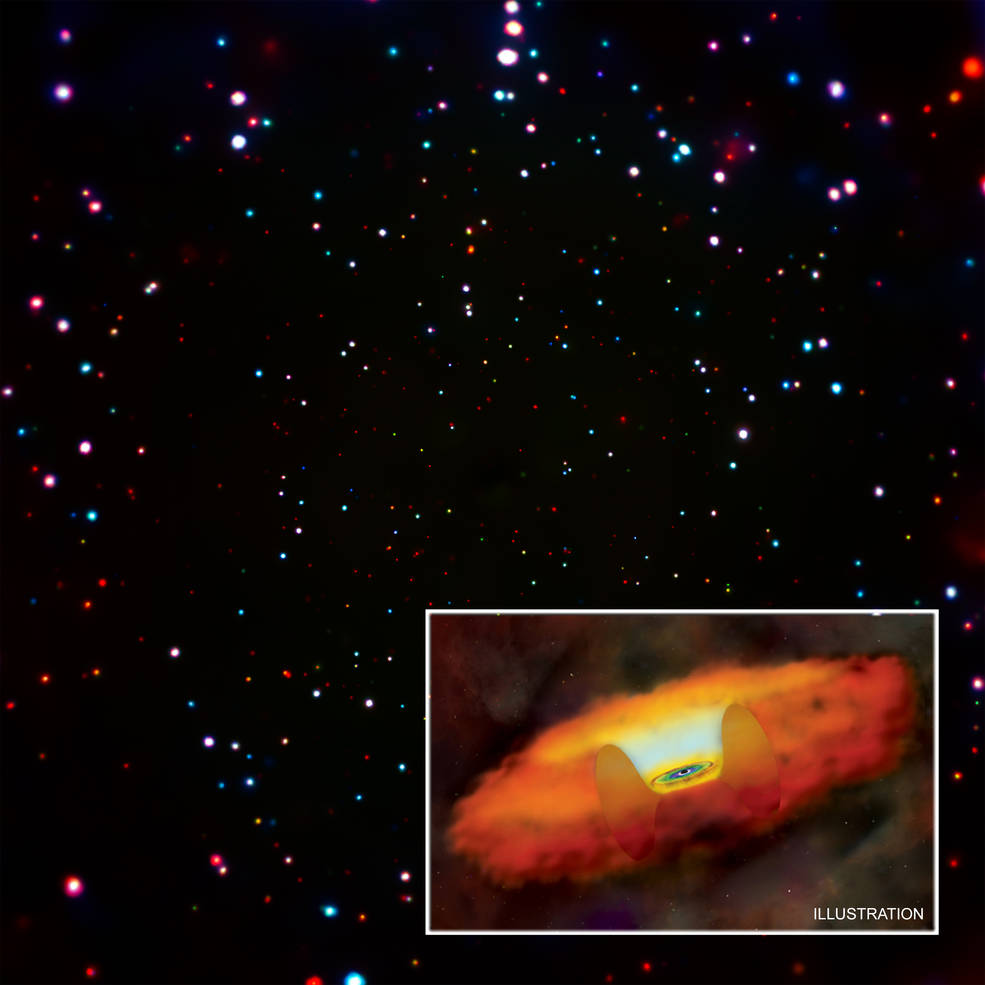 Using data from Chandra and the Sloan Digital Sky Survey, scientists have found evidence that supermassive black holes in the early universe grew intermittently in the first billion years after the Big Bang.
Credits: X-ray: NASA/CXC/Univ. of Rome/E.Pezzulli et al. Illustration: NASA/CXC/M.Weiss
A long-standing question in astrophysics is: how and when did supermassive black holes appear and grow in the early universe? New research using NASA's Chandra X-ray Observatory and the Sloan Digital Sky Survey (SDSS) suggests that an answer to this question lies with the intermittent way giant black holes may consume material in the first billion years after the Big Bang.
Astronomers have determined the Big Bang occurred about 13.8 billion years ago and have evidence from the SDSS that supermassive black holes with masses of about a billion times that of the sun existed by about 12.8 billion years ago. This implies that supermassive black holes grew rapidly in the first billion years after the Big Bang. Yet, scientists have struggled to find signs of these growing giant black holes.
"Supermassive black holes are not spontaneously born -- they need to ingest vast amounts of material and that takes time," said lead author Edwige Pezzulli, PhD student of the University of Rome in Italy and member of the project "FIRST", funded by the European Research Council. "We are trying to figure out how they have done this without giving off many telltale signs of this growth."
When material is falling toward a black hole, it becomes heated, and produces large amounts of electromagnetic radiation, including copious X-ray emission. Rapidly growing black holes in the very early Universe should be detectable with Chandra. However, these growing supermassive black holes have proved to be elusive, with only a few, yet to be confirmed candidates found in very long Chandra observations such as the Chandra Deep Field-South, the deepest X-ray image ever taken.
To address this conundrum, Pezzulli and her colleagues examined different theoretical models and tested them against optical data from the SDSS and X-ray data from Chandra. Their findings indicate that black hole feeding during this era may turn on abruptly and last for short periods of time, which means this growth may be difficult to spot.
"In our model only about a third of black holes were actively consuming material and growing 13 billion years ago" said co-author Rosa Valiante of the National Institute for Astrophysics (INAF) in Italy and member of the FIRST team. "About 200 million years earlier only 3% of the black holes were actively eating. Timing, it appears, may be everything."
Scientists would like to learn about the earliest supermassive black holes in the Universe.
Credits: NASA/CXO
The researchers reached their conclusions after testing multiple hypotheses, all of which assumed that the black hole growth could exceed the so-called Eddington limit, where the outward pressure of radiation from the hot gas balances the inward pull of the gravity of the black hole.
The authors' results argued against the possibility that only a small fraction of galaxies during the first billion years after the Big Bang contain supermassive black holes. Also, although these early black holes were likely obscured by thick clouds of material, the authors found that most of the X-rays would have been able to penetrate these clouds.
The study is based on the idea that when they were born, the first black holes weighed only about a hundred suns. "These "light" black holes seeds could be the remnants of the first generation of massive stars formed only a few hundred million years after the Big Bang" said co-author Maria Orofino, PhD student of the Scuola Normale Superiore in Italy.
The researchers, a team of female scientists, including Simona Gallerani of Scuola Normale Superiore in Pisa and Tullia Sbarrato of Bicocca University of Milan, in Italy, found that black holes can bulk up so much in their relatively rare bursts of intense growth that light seeds can reach a billion times the mass of the Sun when the universe is only a billion years old.
"In order to know if we are ultimately correct, we will need to look at larger swaths of the sky in X-rays to see if we can find the early, feasting black holes that our models have predicted," said Raffaella Schneider, of Sapienza University in Italy and leader of the ERC project FIRST. "Our results certainly show promise."
A paper describing these results recently appeared in the April 2017 issue of the Monthly Notices of the Royal Astronomical Society and is available online. NASA's Marshall Space Flight Center in Huntsville, Alabama, manages the Chandra program for NASA's Science Mission Directorate in Washington. The Smithsonian Astrophysical Observatory in Cambridge, Massachusetts, controls Chandra's science and flight operations.
Read More from NASA's Chandra X-ray Observatory.
For more Chandra images, multimedia and related materials, visit:
http://www.nasa.gov/chandra
Molly PorterNASA Marshall Space Flight Center, Huntsville, Ala.+1 256-424-5158molly.a.porter@nasa.gov
Megan WatzkeChandra X-ray Center, Cambridge, Mass.+1 617-496-7998mwatzke@cfa.harvard.edu
Editor: Lee Mohon
Publicado por salud equitativa en 15:12