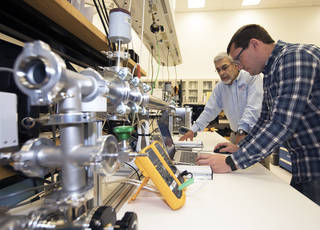 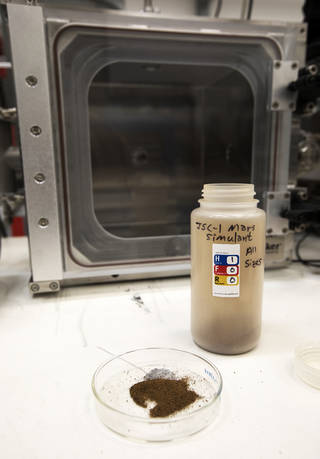 In their Swamp Works laboratory at NASA's Kennedy Space Center, Dr. Carlos Calle and Jay Phillips are testing an electrostatic precipitator using dust that closely approximates the make-up of that on Mars. They upgraded their electrostatic precipitator to fully simulate Martian atmosphere by designing and constructing a dust aerosolization pre-chamber.
Credits: NASA/Kim Shiflett
By Bob GranathNASA's Kennedy Space Center, Florida
NASA's Journey to Mars requires cutting-edge technologies to solve the problems explorers will face on the Red Planet. Scientists at the agency's Kennedy Space Center in Florida are developing some of the needed solutions.
Dr. Carlos Calle, lead scientist in the center's Electrostatics and Surface Physics Laboratory, and Jay Phillips, a research physicist working there, are developing an electrostatic precipitator to help solve the dust problem.
"Commodities such as oxygen water and methane can be obtained from the carbon dioxide-rich Martian atmosphere," Calle said. "Astronauts will need these essentials as they practice in-situ resource utilization."
In-situ resource utilization, or ISRU, is harvesting and relying on available raw materials as astronauts visit deep-space destinations. Like early European settlers coming to America, planetary pioneers will not be able to take everything they need, so many supplies will need to be gathered and made on site.
An electrostatic precipitator works by capturing the fine dust from a gas stream while it travels between a pair of high-voltage electrodes. The electrodes induce an electrostatic charge on the dust particles that causes them to migrate to an oppositely charged electrode.
Electrostatic precipitators are efficient collectors of small particles and are widely used in industrial applications, such as removing particles from plumes at power plants.
Phillips explained that he and Calle are conducting experiments to adapt an existing technology for use on Mars.
"Electrostatic precipitators will remove dust from the atmospheric gas intakes on the Martian ISRU processing plants," Philips said. "Dust can damage equipment and must be separated from the atmosphere prior to producing the consumables astronauts will require for life support and fuel on Mars."
Phillips noted that a Martian version of the electrostatic precipitator technology would need to be highly modified for use there.
"The plan is to send an electrostatic precipitator and other equipment to a landing site to prepare for the arrival of the crew," he said.
In their Swamp Works laboratory, Calle and Phillips are using dust that closely approximates the makeup of that on Mars. They upgraded their electrostatic precipitator to simulate Martian atmosphere by designing and constructing a dust aerosolization prechamber. The atmospheric pressure on the Martian surface averages about 0.6 percent of Earth's mean sea level pressure and is composed mostly of carbon dioxide.
Aerosolization is a process that converts a substance into the form of particles small and light enough to be suspended into the air in a manner similar to an aerosol.
"The challenge on Mars is the much lower atmospheric pressure there compared to the atmospheric pressure on Earth," Calle said.
The end result of the current project is to develop a new generation electrostatic precipitator system capable of removing dust in the environment of the Red Planet, enabling future space pioneers to live off the land.
Editor: Bob Granath
Publicado por salud equitativa en 10:45