The Niagara Falls of Mars | NASA

The Niagara Falls of Mars 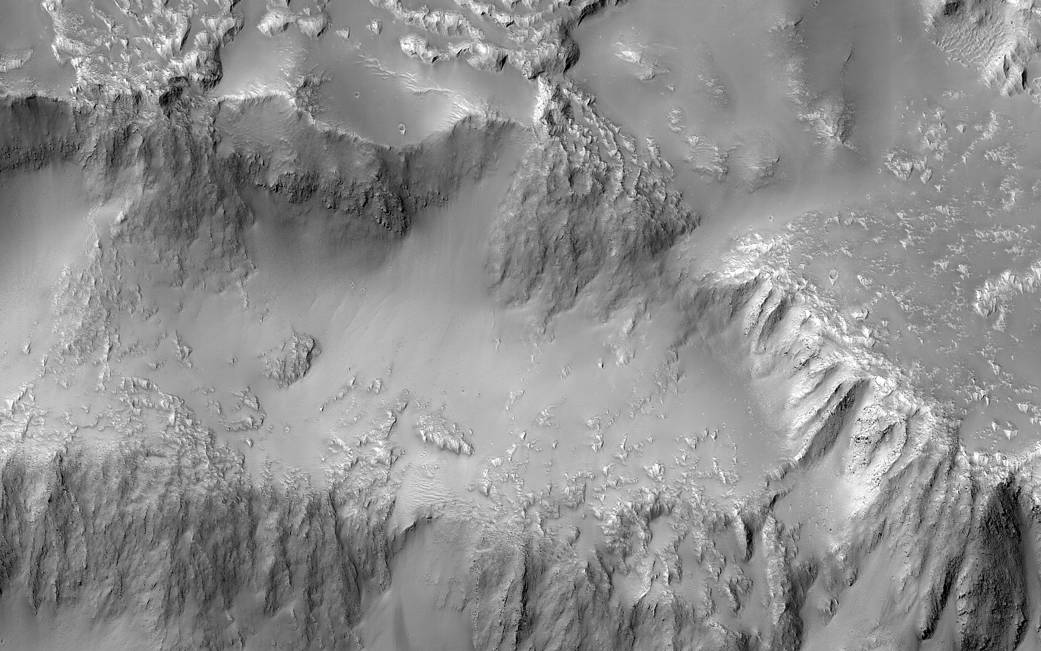 Various researchers are often pre-occupied with the quest for flowing water on Mars. However, this image from NASA's Mars Reconnaissance Orbiter (MRO), shows one of the many examples from Mars where lava (when it was molten) behaved in a similar fashion to liquid water.
In a 3D image from MRO's Context Camera, the northern rim of a 30-kilometer diameter crater situated in the western part of the Tharsis volcanic province is shown. (See the HiRISE 3D image as well.) The image shows that a lava flow coming from the north-northeast surrounded the crater rim, and rose to such levels that it breached the crater rim at four locations to produce spectacular multi-level lava falls (one in the northwest and three in the north). These lava "falls" cascaded down the wall and terraces of the crater to produce a quasi-circular flow deposit. It seems that the flows were insufficient to fill or even cover the pre-existing deposits of the crater floor. This is evidenced by the darker-toned lavas that overlie the older, and possibly dustier, lighter-toned deposits on the crater floor.
This image covers the three falls in the north-central region of the crater wall. The lava flows and falls are distinct as they are rougher than the original features that are smooth and knobby. In a close-up image the rough-textured lava flow to the north has breached the crater wall at a narrow point, where it then cascades downwards, fanning out and draping the steeper slopes of the wall in the process.
This is a stereo pair with ESP_050472_1585.
The map is projected here at a scale of 50 centimeters (19.7 inches) per pixel. [The original image scale is 54.5 centimeters (21.5 inches) per pixel (with 2 x 2 binning); objects on the order of 164 centimeters (64.6 inches) across are resolved.] North is up.
The University of Arizona, Tucson, operates HiRISE, which was built by Ball Aerospace & Technologies Corp., Boulder, Colo. NASA's Jet Propulsion Laboratory, a division of Caltech in Pasadena, California, manages the Mars Reconnaissance Orbiter Project for NASA's Science Mission Directorate, Washington.
Image credit: NASA/JPL-Caltech/Univ. of Arizona
Image download options
Editor: Tony Greicius
Publicado por salud equitativa en 14:06