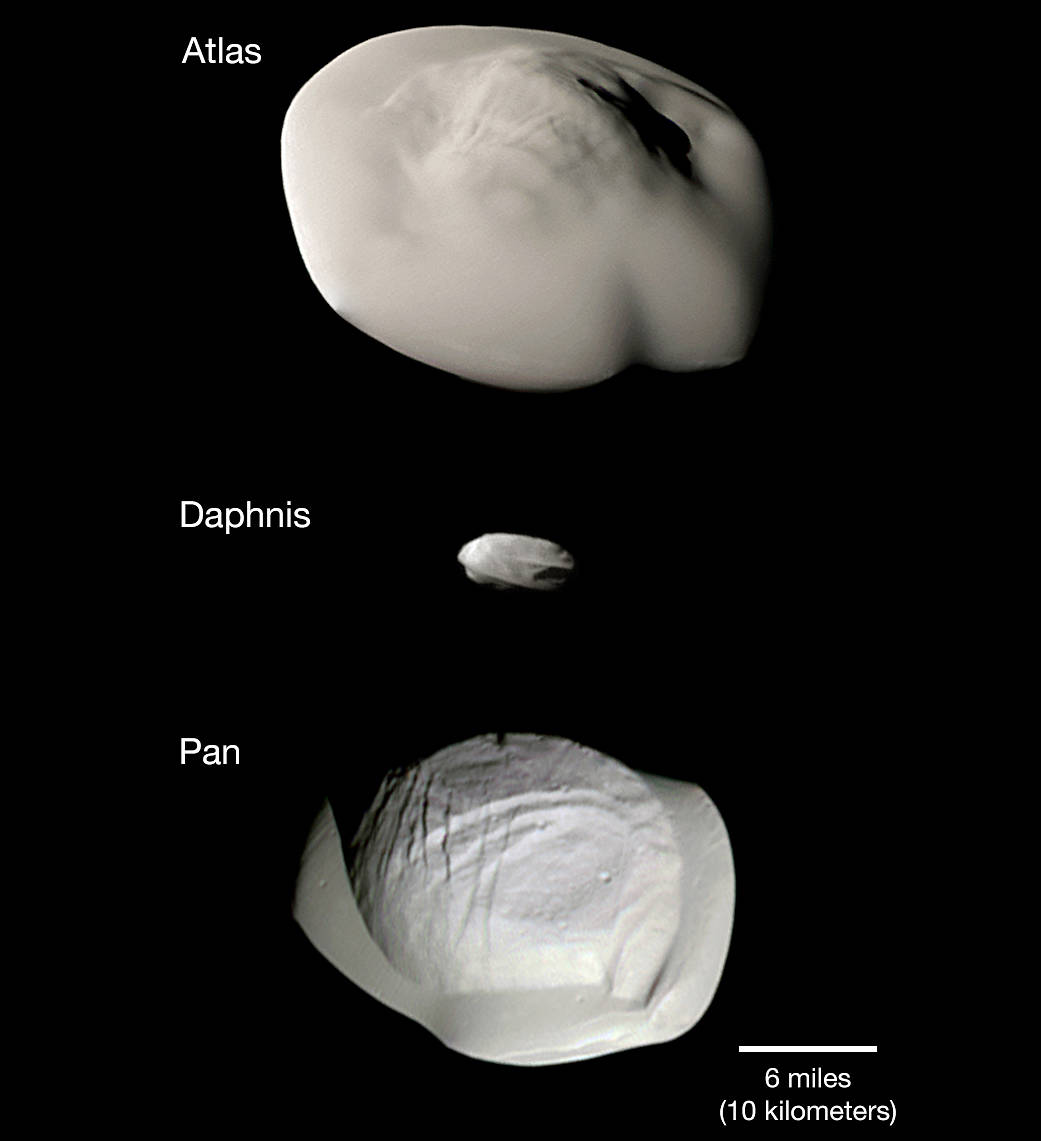 This montage of views from NASA's Cassini spacecraft shows three of Saturn's small ring moons: Atlas, Daphnis and Pan at the same scale for ease of comparison.
Two differences between Atlas and Pan are obvious in this montage. Pan's equatorial band is much thinner and more sharply defined, and the central mass of Atlas (the part underneath the smooth equatorial band) appears to be smaller than that of Pan.
Images of Atlas and Pan taken using infrared, green and ultraviolet spectral filters were combined to create enhanced-color views, which highlight subtle color differences across the moons' surfaces at wavelengths not visible to human eyes. (The Daphnis image was colored using the same green filter image for all three color channels, adjusted to have a realistic appearance next to the other two moons.)
A version of the montage using only monochrome images is also provided here.
All of these images were taken using the Cassini spacecraft narrow-angle camera. The images of Atlas were acquired on April 12, 2017, at a distance of 10,000 miles (16,000 kilometers) and at a sun-moon-spacecraft angle (or phase angle) of 37 degrees. The images of Pan were taken on March 7, 2017, at a distance of 16,000 miles (26,000 kilometers) and a phase angle of 21 degrees. The Daphnis image was obtained on Jan. 16, 2017, at a distance of 17,000 miles (28,000 kilometers) and at a phase angle of 71 degrees. All images are oriented so that north is up.
The Cassini mission is a cooperative project of NASA, ESA (the European Space Agency) and the Italian Space Agency. The Jet Propulsion Laboratory, a division of Caltech in Pasadena, California, manages the mission for NASA's Science Mission Directorate, Washington. The Cassini orbiter and its two onboard cameras were designed, developed and assembled at JPL. The imaging operations center is based at the Space Science Institute in Boulder, Colorado.
For more information about the Cassini-Huygens mission visit http://saturn.jpl.nasa.gov and http://www.nasa.gov/cassini. The Cassini imaging team homepage is at http://ciclops.org.
Image Credit: NASA/JPL-Caltech/Space Science Institute
Image download options
Editor: Tony Greicius
Publicado por salud equitativa en 14:09