About 3 billion years ago, a pair of orbiting black holes collided to form a single object with 49 times the mass of our sun. The event unleashed powerful gravitational waves—ripples in the very fabric of space and time—that reached Earth seconds before 5:12 a.m. EST on Jan. 4, 2017. That's when they were detected by the ground-based twin Laser Interferometer Gravitational-Wave Observatory (LIGO) facilities in Hanford, Washington, and Livingston, Louisiana.
The event, known as GW170104, after the date, is the third detection of gravitational waves by LIGO. Located at a distance of about 3 billion light-years, the coalesced black hole is twice as far away as both of the two mergers previously detected.
The LIGO Scientific Collaboration (LSC), an international group of researchers that includes NASA scientists, reported the findings in a paper published online June 1 in the journal Physical Review Letters.
"We have further confirmation of the existence of stellar-mass black holes that are larger than 20 solar masses—these are objects we didn't know existed before LIGO detected them," said LSC spokesperson David Shoemaker of the Massachusetts Institute of Technology in Cambridge. "It is remarkable that humans can put together a story, and test it, for such strange and extreme events that took place billions of years ago and billions of light-years distant from us."
This visualization shows gravitational waves emitted by two black holes (black spheres) of nearly equal mass as they spiral together and merge in an event like GW170104. Yellow structures near the black holes illustrate the strong curvature of space-time in the region. Orange ripples represent distortions of space-time caused by the rapidly orbiting masses. These distortions spread out and weaken, ultimately becoming gravitational waves (purple). This simulation was performed on the Pleiades supercomputer at NASA's Ames Research Center.
Credits: NASA/Bernard J. Kelly (Goddard and University of Maryland Baltimore County), Chris Henze (Ames) and Tim Sandstrom (CSC Government Solutions LLC)
LIGO detected the first black hole mergers in September and December 2015. In the instant before the black holes merged, all three of these events produced more power as gravitational waves than is radiated as light by all the stars in the observable universe at any given time.
"Up until the success of LIGO, almost everything we knew about the universe came from light," said Tyson Littenberg, principal investigator of the LIGO research group at NASA's Marshall Space Flight Center in Huntsville, Alabama. "Gravitational wave observations are now firmly part of the toolbox for understanding some of the most exotic objects and violent events in the universe."
Littenberg's contributions to the project have helped push the extremes of signal-processing techniques. He is on the team that developed sophisticated algorithms needed to accurately parse out signals that are barely measureable—disturbances 10,000 times smaller than an atomic nucleus. He also helped develop and run large-scale simulations to determine how sensitive LIGO is to different gravitational wave signals.
"LIGO could not succeed without the effort and continued support of more than a thousand scientists and engineers from all corners of the globe," Littenberg said. "Gravitational wave detection is an incredibly challenging endeavor, both scientifically and technologically, and we have only just begun to reap the benefits."
NASA researchers are also deeply interested in detecting high-energy light from mergers using orbiting observatories. Having both the gravitational and X-ray or gamma-ray signals from a merger would provide scientists with the greatest amount of information about these events. While mergers of binary black holes are not generally expected to produce electromagnetic signals, theorists have proposed exotic systems that possibly could. And mergers between black holes and other types of objects, such as neutron stars, are expected to produce high-energy flares. 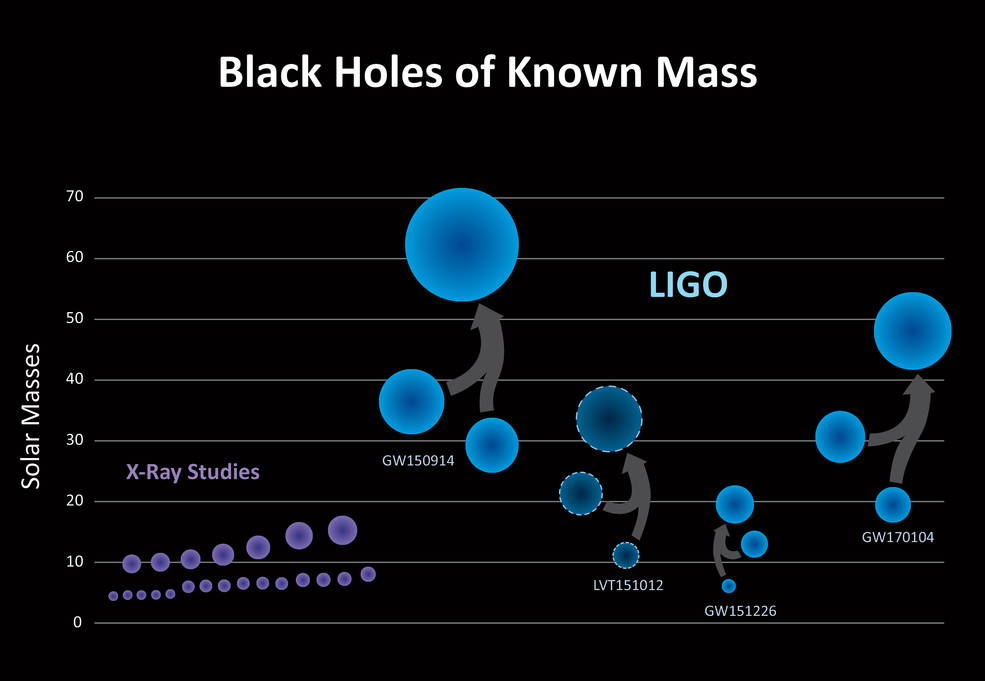 LIGO has discovered a new population of black holes with masses that are larger than what had been seen before with X-ray studies alone (purple). The three confirmed detections by LIGO (GW150914, GW151226 and GW170104) and one lower-confidence detection (LVT151012) all point to a population of stellar-mass binary black holes that, once merged, are larger than 20 solar masses.
Credits: LIGO/Caltech/Sonoma State (Aurore Simonnet)
"We're refining techniques to narrow down the amount of sky we'll need spacecraft to search in order to find a flare associated with a gravitational wave event," said Tito Dal Canton, a post-doctoral researcher in the LIGO group at NASA's Goddard Space Flight Center in Greenbelt, Maryland, who contributed to the detection algorithm used to identify the gravitational signal from this event.
Astronomers will need both ground-based and space-based observatories to take full advantage of this new observational window on the universe. NASA is working closely with ESA (the European Space Agency) to develop a concept for a space-based gravitational wave observatory and contributed to ESA's LISA Pathfinder mission, which demonstrated critical technologies needed for such an undertaking.
"LIGO is unveiling a population of stellar-mass black holes far more massive than those that have been detected through previous observations," said Jordan Camp, principal investigator for the Goddard LIGO team. "The mystery now is how these larger black holes form, and how they end up close enough to one another that we observe them merging so frequently."
LIGO is funded by the National Science Foundation (NSF), and operated by MIT and Caltech, which conceived and built the project. Financial support for the Advanced LIGO project was led by NSF with Germany (Max Planck Society), the U.K. (Science and Technology Facilities Council) and Australia (Australian Research Council) making significant commitments and contributions to the project. More than 1,000 scientists from around the world participate in the effort through the LIGO Scientific Collaboration, which includes the GEO Collaboration. LIGO partners with the Virgo Collaboration, a consortium including 280 additional scientists throughout Europe supported by the Centre National de la Recherche Scientifique (CNRS), Istituto Nazionale di Fisica Nucleare (INFN) and Nikhef, as well as Virgo's host institution, the European Gravitational Observatory. Additional partners are listed at: http://ligo.org/partners.php.
Molly PorterMarshall Space Flight Center, Huntsville, Ala.
Francis ReddyNASA's Goddard Space Flight Center, Greenbelt, Md.
Editor: Lee Mohon
Publicado por salud equitativa en 15:10