Limits to Spot Clumps of

When it comes to the distant universe, even the keen vision of NASA's Hubble Space Telescope can only go so far. Teasing out finer details requires clever thinking and a little help from a cosmic alignment with a gravitational lens.
By applying a new computational analysis to a galaxy magnified by a gravitational lens, astronomers have obtained images 10 times sharper than what Hubble could achieve on its own. The results show an edge-on disk galaxy studded with brilliant patches of newly formed stars. 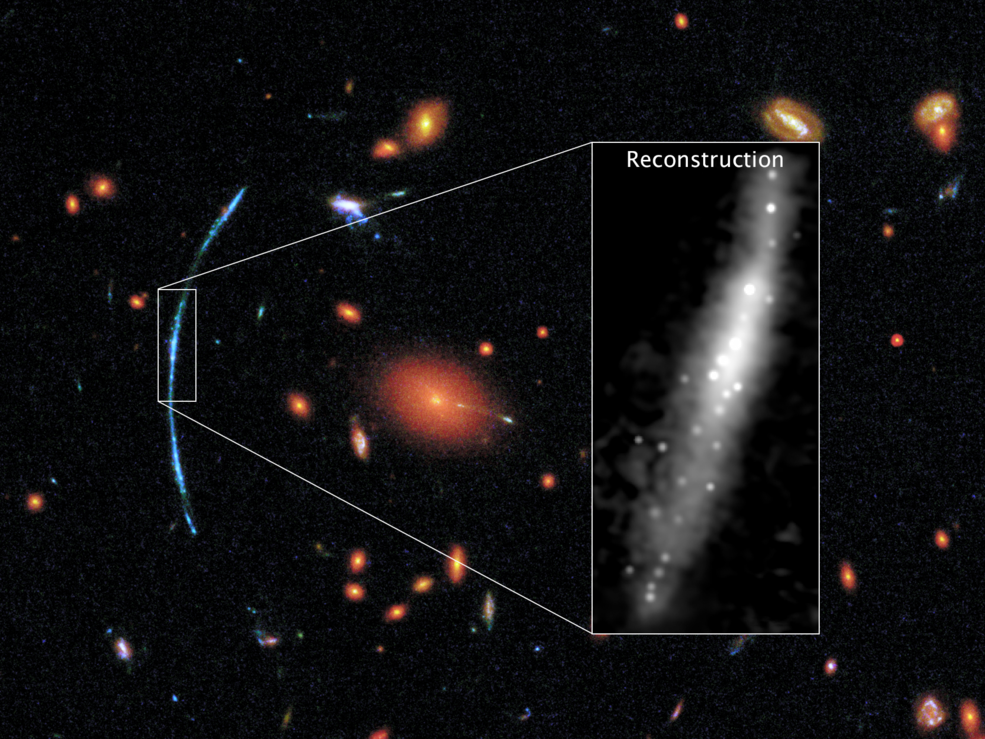 In this Hubble photograph of a distant galaxy cluster, a spotty blue arc stands out against a background of red galaxies. That arc is actually three separate images of the same background galaxy. The background galaxy has been gravitationally lensed, its light magnified and distorted by the intervening galaxy cluster. On the right: How the galaxy would look to Hubble without distortions.
Credits: NASA, ESA, and T. Johnson (University of Michigan)
"When we saw the reconstructed image we said, 'Wow, it looks like fireworks are going off everywhere,'" said astronomer Jane Rigby of NASA's Goddard Space Flight Center in Greenbelt, Maryland.
The galaxy in question is so far away that we see it as it appeared 11 billion years ago, only 2.7 billion years after the big bang. It is one of more than 70 strongly lensed galaxies studied by the Hubble Space Telescope, following up targets selected by the Sloan Giant Arcs Survey, which discovered hundreds of strongly lensed galaxies by searching Sloan Digital Sky Survey imaging data covering one-fourth of the sky. 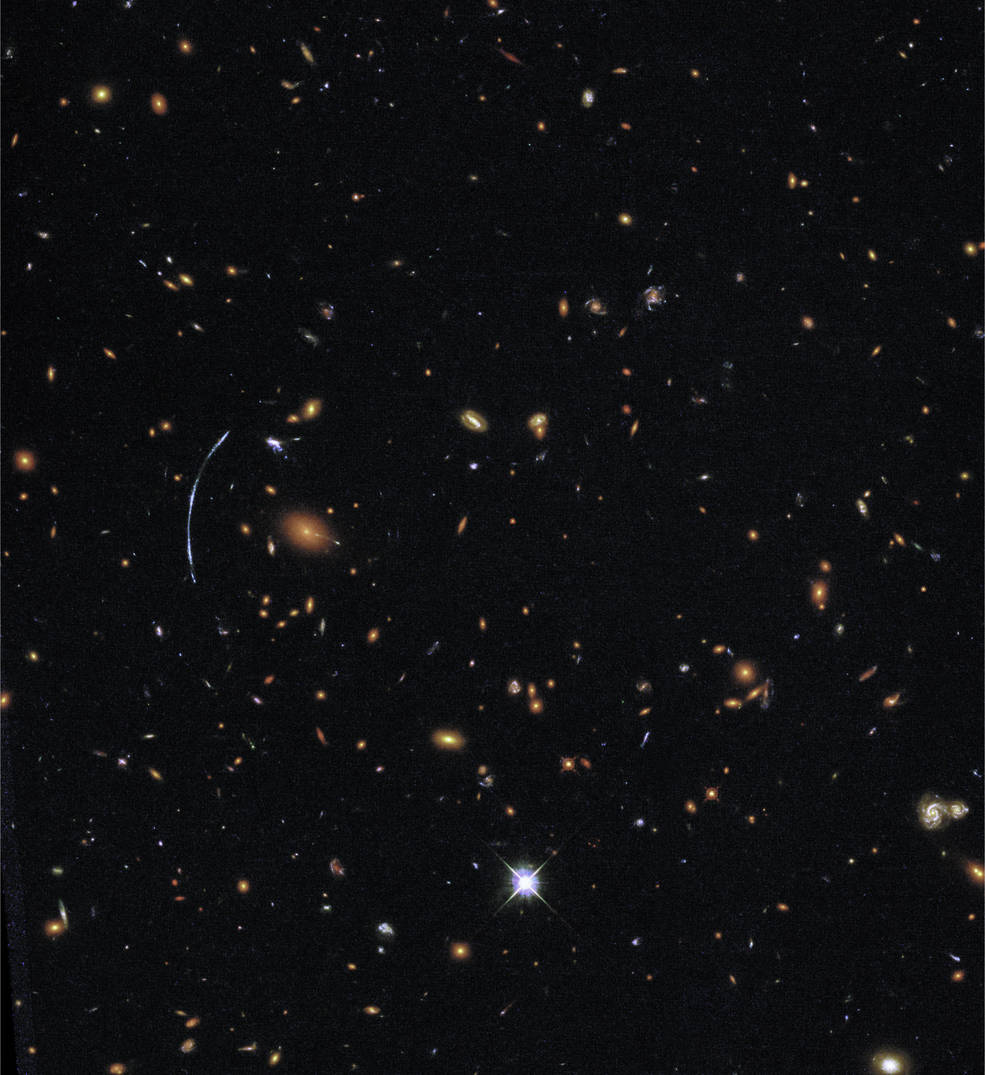 The galaxy cluster SDSS J1110+6459 is located about 6 billion light-years from Earth and contains hundreds of galaxies. At left, a distinctive blue arc is actually composed of three separate images of a more distant background galaxy called SGAS J111020.0+645950.8. The background galaxy has been magnified, distorted, and multiply imaged by the gravity of the galaxy cluster in a process known as gravitational lensing.
Credits: NASA, ESA, and T. Johnson (University of Michigan) 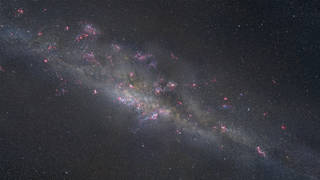 Banner image: This artist's illustration portrays what the gravitationally lensed galaxy SDSS J1110+6459 might look like up close. A sea of young, blue stars is streaked with dark dust lanes and studded with bright pink patches that mark sites of star formation. The patches' signature glow comes from ionized hydrogen, like we see in the Orion Nebula in our own galaxy.
Credits: NASA, ESA, and Z. Levay (STScI)
The gravity of a giant cluster of galaxies between the target galaxy and Earth distorts the more distant galaxy's light, stretching it into an arc and also magnifying it almost 30 times. The team had to develop special computer code to remove the distortions caused by the gravitational lens, and reveal the disk galaxy as it would normally appear.

Got a stellar Hubble image on a T-shirt? Or maybe you’ve spotted a Hubble tattoo! Share your photos on Instagram, Twitter, Flickr and Facebook with #SpotHubble and maybe you’ll get a shout-out from @NASAHubble!
Credits: NASA's Goddard Space Flight Center/Jenny Hottle
Learn More about #SpotHubble
The resulting reconstructed image revealed two dozen clumps of newborn stars, each spanning about 200 to 300 light-years. This contradicted theories suggesting that star-forming regions in the distant, early universe were much larger, 3,000 light-years or more in size.
"There are star-forming knots as far down in size as we can see," said doctoral student Traci Johnson of the University of Michigan, lead author of two of the three papers describing the research.
Without the magnification boost of the gravitational lens, Johnson added, the disk galaxy would appear perfectly smooth and unremarkable to Hubble. This would give astronomers a very different picture of where stars are forming.
While Hubble highlighted new stars within the lensed galaxy, NASA's James Webb Space Telescope will uncover older, redder stars that formed even earlier in the galaxy's history. It will also peer through any obscuring dust within the galaxy.
"With the Webb Telescope, we'll be able to tell you what happened in this galaxy in the past, and what we missed with Hubble because of dust," said Rigby.
These findings appear in a paper published in The Astrophysical Journal Letters and two additional papers published in The Astrophysical Journal.
The Hubble Space Telescope is a project of international cooperation between NASA and the European Space Agency. NASA's Goddard Space Flight Center in Greenbelt, Maryland, manages the telescope. The Space Telescope Science Institute (STScI) in Baltimore, Maryland, conducts Hubble science operations. STScI is operated for NASA by the Association of Universities for Research in Astronomy in Washington, D.C.
PIO Contacts:Christine Pulliam / Ray VillardSpace Telescope Science Institute, Baltimore, Maryland410-338-4366 / 410-338-4514cpulliam@stsci.edu / villard@stsci.edu
Science Contacts:Dr. Jane RigbyNASA Goddard Space Flight Center, Greenbelt, Maryland301-286-1507 (office) / 240-475-3917 (cell)jane.r.rigby@nasa.gov
Traci JohnsonUniversity of Michigan, Ann Arbor, Michigan612-325-1402tljohn@umich.edu
Editor: Karl Hille
Publicado por salud equitativa en 15:43