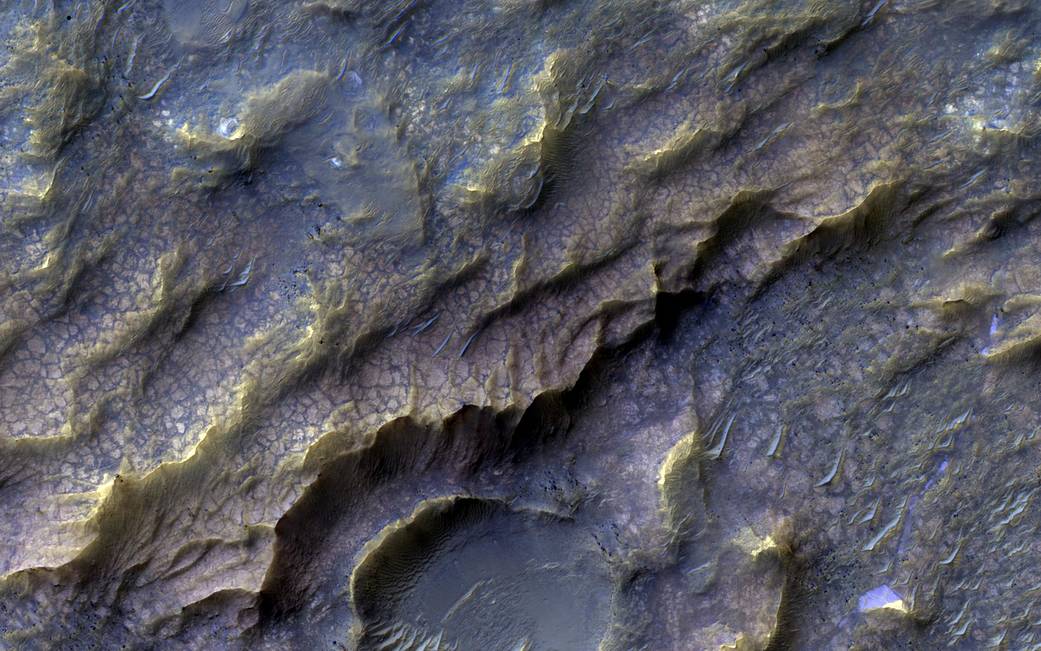 This intriguing surface texture is the result of rock interacting with water, as observed by NASA's Mars Reconnaissance Orbiter. The rock was then eroded and later exposed to the surface. The pinkish, almost dragon-like scaled texture represents Martian bedrock that has specifically altered into a clay-bearing rock.
The nature of the water responsible for the alteration, and how it interacted with the rock to form the clay remains poorly understood. Not surprisingly, the study of such altered rocks on Mars is an area of active investigation by the Mars science community. Understanding such interactions, and how they happened, help scientists to understand the past climate on Mars, and if the red planet ever harbored life.
Recent studies indicate that the early Martian climate may not have been as warm, wet, and Earth-like, as previously suggested. This is not a problem for finding life on Mars as one might think. Ongoing studies of dry and cold environments on Earth shows that life finds ways to adapt to such extremes. Such work provides hope for finding evidence for life on other planets, like Mars, someday.
The map is projected here at a scale of 25 centimeters (9.8 inches) per pixel. [The original image scale is 25.3 centimeters (.99 inches) per pixel (with 1 x 1 binning); objects on the order of 76 centimeters (29.9 inches) across are resolved.] North is up.
The University of Arizona, Tucson, operates HiRISE, which was built by Ball Aerospace & Technologies Corp., Boulder, Colo. NASA's Jet Propulsion Laboratory, a division of Caltech in Pasadena, California, manages the Mars Reconnaissance Orbiter Project for NASA's Science Mission Directorate, Washington.
Editor: Martin Perez
Publicado por salud equitativa en 16:27