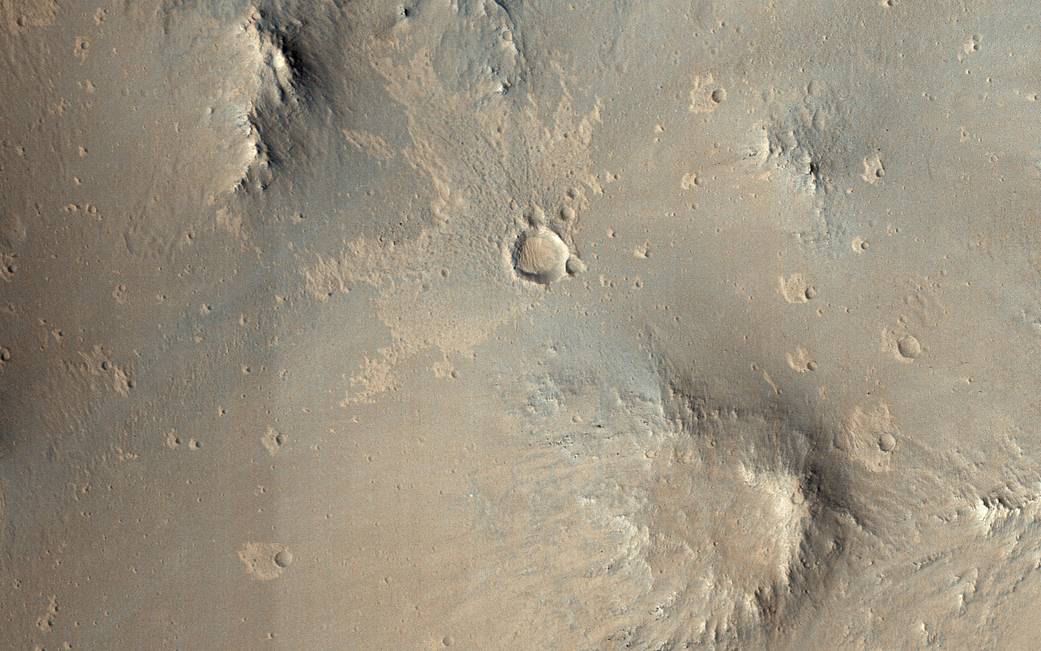 This image from NASA's Mars Reconnaissance Orbiter shows one of millions of small (10s of meters in diameter) craters and their ejecta material that dot the Elysium Planitia region of Mars. The small craters were likely formed when high-speed blocks of rock were thrown out by a much larger impact (about 10-kilometers in diameter) and fell back to the ground.
Some of these blocks may actually escape Mars, which is how we get samples in the form of meteorites that fall to Earth. Other ejected blocks have insufficient velocity, or the wrong trajectory, to escape the Red Planet. As such, when one of these high-speed blocks impacts the surface, it makes what is called a "secondary" crater. These secondaries can form dense "chains" or "rays," which are radial to the crater that formed them.
Tycho Crater is an excellent example of a "rayed crater" that shows rays that span the entire near-side of the Moon.
The map is projected here at a scale of 50 centimeters (19.7 inches) per pixel. [The original image scale is 55.8 centimeters (21.9 inches) per pixel (with 2 x 2 binning); objects on the order of 168 centimeters (66.1 inches) across are resolved.] North is up.
The University of Arizona, Tucson, operates HiRISE, which was built by Ball Aerospace & Technologies Corp., Boulder, Colo. NASA's Jet Propulsion Laboratory, a division of Caltech in Pasadena, California, manages the Mars Reconnaissance Orbiter Project for NASA's Science Mission Directorate, Washington.
Editor: Martin Perez
Publicado por salud equitativa en 7:08