through Waves in Space

The space surrounding our planet is full of restless charged particles and roiling electric and magnetic fields, which create waves around Earth. One type of wave, plasmaspheric hiss, is particularly important for removing charged particles from the Van Allen radiation belts, a seething coil of particles encircling Earth, which can interfere with satellites and telecommunications. A new study published in Journal of Geophysical Research using data from NASA’s Van Allen Probes spacecraft has discovered that hiss is more complex than previously understood.
The new study looked at a newly identified population of hiss waves at a lower frequency than usually studied. These low-frequency hiss waves are particularly good at cleaning out high-energy particles — those that can cause damage to satellites — from the radiation belts. The authors of the study noticed that low-frequency waves are actually a separate and unique population, tending to cluster in different regions around Earth compared to their high-frequency counterparts. 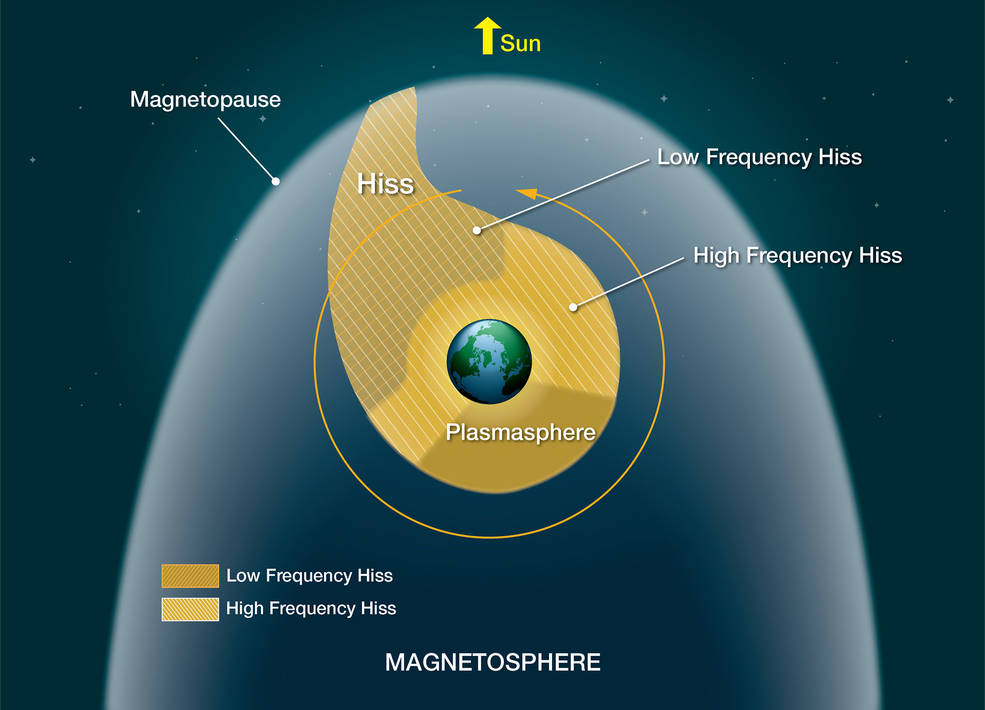 The two populations of hiss, low and high frequency, inhabit two separate regions in near-Earth space.
Credits: NASA's Goddard Space Flight Center/Mary Pat Hrybyk-Keith
“You want to know the state of the Van Allen radiation belts so you know how long satellites will last, and part of that is understanding the state of the waves,” said David Malaspina, lead author and researcher at the Laboratory for Atmospheric and Space Physics in Boulder, Colorado. “We found the low frequency hiss interacts more effectively with higher energy electrons and can knock those electrons out of the belts more efficiently.”
In order to protect satellites, NASA wants to better understand this region of near-Earth space. The space environment surrounding Earth is filled with plasma — clouds of charged particles — whose movement is determined not only by gravity, but also by electromagnetics. Constantly changing electric and magnetic fields rolling through space interact with the particles, creating waves in the plasma (like hiss), which are integral to sculpting the near-Earth space environment.
To understand the ever-changing near-Earth particle ecosystem and make better space weather predictions, scientists create models of the plasma waves. Incorporating this new information will make for better simulations. Homayon Aryan, researcher at NASA’s Goddard Space Flight Center in Greenbelt, Maryland, said, “Most current wave models do not include this low frequency population of hiss waves. This is definitely an improvement and will allow us to understand the region better and compare theoretical predictions with observations more effectively.”
Hiss is aptly named: its typical frequencies are right in the middle of the audible range, and it sounds like static noise when picked up by radio receivers. No one knows with certainty how low-frequency hiss waves originate, but current theories suggest that they form when charged particles are injected into the region of cold near-Earth plasma known as the plasmasphere. NASA’s Van Allen Probes spacecraft study hiss and other plasma waves as part of their work to understand the complex interactions of particles and electromagnetic fields in near-Earth space.
Related Links
By Mara Johnson-Groh