The sharp eye of NASA's Hubble Space Telescope has captured the tiny moon Phobos during its orbital trek around Mars. Because the moon is so small, it appears star-like in the Hubble pictures.
Over the course of 22 minutes, Hubble took 13 separate exposures, allowing astronomers to create a time-lapse video showing the diminutive moon's orbital path. The Hubble observations were intended to photograph Mars, and the moon's cameo appearance was a bonus.
When the Hubble Space Telescope observed Mars near opposition in May, 2016, a sneaky companion photobombed the picture. Phobos, the Greek personification of fear, is one of two tiny moons orbiting Mars. In 13 exposures over 22 minutes, Hubble captured a timelapse of Phobos moving through its 7-hour 39-minute orbit.
Credits: NASA's Goddard Space Flight Center
A football-shaped object just 16.5 miles by 13.5 miles by 11 miles, Phobos is one of the smallest moons in the solar system. It is so tiny that it would fit comfortably inside the Washington, D.C. Beltway.
The little moon completes an orbit in just 7 hours and 39 minutes, which is faster than Mars rotates. Rising in the Martian west, it runs three laps around the Red Planet in the course of one Martian day, which is about 24 hours and 40 minutes. It is the only natural satellite in the solar system that circles its planet in a time shorter than the parent planet's day.
About two weeks after the Apollo 11 manned lunar landing on July 20, 1969, NASA's Mariner 7 flew by the Red Planet and took the first crude close-up snapshot of Phobos. On July 20, 1976 NASA's Viking 1 lander touched down on the Martian surface. A year later, its parent craft, the Viking 1 orbiter, took the first detailed photograph of Phobos, revealing a gaping crater from an impact that nearly shattered the moon. 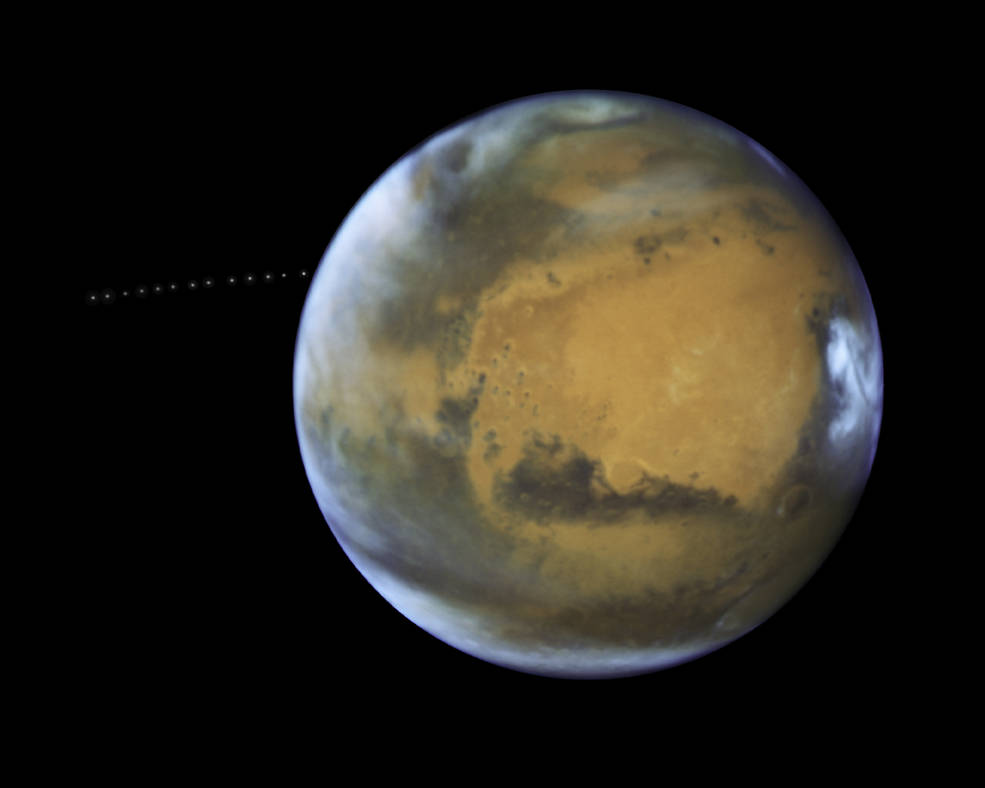 Over the course of 22 minutes, Hubble took 13 separate exposures, allowing astronomers to create a time-lapse image showing the tiny moon Phobos during its orbital trek (white dots) around Mars. This image is a composite of separate exposures acquired by NASA's Hubble WFC3/UVIS instrument. Banner Animation: The animation at the top of the page was made from these images.
Credits: NASA, ESA, and Z. Levay (STScI), Acknowledgment: J. Bell (ASU) and M. Wolff (Space Science Institute)

Got a stellar Hubble image on a T-shirt? Or maybe you’ve spotted a Hubble tattoo! Share your photos on Instagram, Twitter, Flickr and Facebook with #SpotHubble and maybe you’ll get a shout-out from @NASAHubble!
Credits: NASA's Goddard Space Flight Center/Jenny Hottle
Learn More about #SpotHubble
​Phobos was discovered by Asaph Hall on August 17, 1877 at the U.S. Naval Observatory in Washington, D.C., six days after he found the smaller, outer moon, named Deimos. Hall was deliberately searching for Martian moons.
Both moons are named after the sons of Ares, the Greek god of war, who was known as Mars in Roman mythology. Phobos (panic or fear) and Deimos (terror or dread) accompanied their father into battle.
Close-up photos from Mars-orbiting spacecraft reveal that Phobos is apparently being torn apart by the gravitational pull of Mars. The moon is marred by long, shallow grooves that are probably caused by tidal interactions with its parent planet. Phobos draws nearer to Mars by about 6.5 feet every hundred years. Scientists predict that within 30 to 50 million years, it either will crash into the Red Planet or be torn to pieces and scattered as a ring around Mars.
Orbiting 3,700 miles above the Martian surface, Phobos is closer to its parent planet than any other moon in the solar system. Despite its proximity, observers on Mars would see Phobos at just one-third the width of the full moon as seen from Earth. Conversely, someone standing on Phobos would see Mars dominating the horizon, enveloping a quarter of the sky.
From the surface of Mars, Phobos can be seen eclipsing the sun. However, it is so tiny that it doesn't completely cover our host star. Transits of Phobos across the sun have been photographed by several Mars-faring spacecraft.
The origin of Phobos and Deimos is still being debated. Scientists concluded that the two moons were made of the same material as asteroids. This composition and their irregular shapes led some astrophysicists to theorize that the Martian moons came from the asteroid belt.
However, because of their stable, nearly circular orbits, other scientists doubt that the moons were born as asteroids. Such orbits are rare for captured objects, which tend to move erratically. An atmosphere could have slowed down Phobos and Deimos and settled them into their current orbits, but the Martian atmosphere is too thin to have circularized the orbits. Also, the moons are not as dense as members of the asteroid belt.
Phobos may be a pile of rubble that is held together by a thin crust. It may have formed as dust and rocks encircling Mars were drawn together by gravity. Or, it may have experienced a more violent birth, where a large body smashing into Mars flung pieces skyward, and those pieces were brought together by gravity. Perhaps an existing moon was destroyed, reduced to the rubble that would become Phobos.
Hubble took the images of Phobos orbiting the Red Planet on May 12, 2016, when Mars was 50 million miles from Earth. This was just a few days before the planet passed closer to Earth in its orbit than it had in the past 11 years.
The Hubble Space Telescope is a project of international cooperation between NASA and ESA (European Space Agency). NASA's Goddard Space Flight Center in Greenbelt, Maryland, manages the telescope. The Space Telescope Science Institute (STScI) in Baltimore, Maryland, conducts Hubble science operations. STScI is operated for NASA by the Association of Universities for Research in Astronomy, Inc., in Washington, D.C.
For images and more information about Hubble, visit:
http://hubblesite.org/news_release/news/2017-29
www.nasa.gov/hubble
Ann Jenkins / Ray VillardSpace Telescope Science Institute, Baltimore, Maryland410-338-4488 / 410-338-4514jenkins@stsci.edu / villard@stsci.edu
Zolt LevaySpace Telescope Science Institute, Baltimore, Maryland410-338-4907levay@stsci.edu
Editor: Karl Hille
Publicado por salud equitativa en 10:54