A primitive solar system object that’s more than four billion miles (6.5 billion kilometers) away passed in front of a distant star as seen from Earth. Just before midnight Eastern Time Sunday (12:50 a.m. local time July 17), several telescopes deployed by the New Horizons team in a remote part of Argentina were in precisely the right place at the right time to catch its fleeting shadow — an event that’s known as an occultation.

Now you see it, now you don’t: NASA’s New Horizons team trained mobile telescopes on an unnamed star (center) from rural Argentina on July 17, 2017. A Kuiper Belt object 4.1 billion miles from Earth -- known as 2014 MU69 -- briefly blocked the light from the background star, in what’s called an occultation. The time difference between frames is 200 milliseconds, or 0.2 seconds. This data helps scientists to better measure the shape, size and environment around the object; the New Horizons spacecraft will fly by this ancient relic of solar system formation on Jan. 1, 2019.
Credits: NASA/JHUAPL/SwRI
In a matter of seconds, NASA’s New Horizons team captured new data on its elusive target, an ancient Kuiper Belt object known as 2014 MU69. Weary but excited team members succeeded in detecting the spacecraft’s next destination, in what’s being called the most ambitious and challenging ground occultation observation campaign in history. 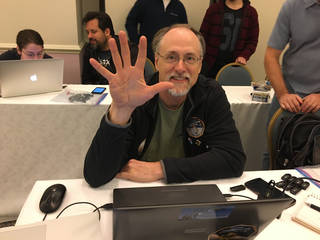 Marc Buie, New Horizons occultation campaign lead, holds up five fingers to represent the number of mobile telescopes in Argentina initially thought to have detected the fleeting shadow of 2014 MU69. The New Horizons spacecraft will fly by the ancient Kuiper Belt object on Jan. 1, 2019.
Credits: NASA/JHUAPL/SwRI/Adriana Ocampo
“So far we have five confirmed occultations,” said Marc Buie of the Southwest Research Institute (SwRI) in Boulder, Colorado, holding up five fingers as New Horizons scientists pored over the exhilarating initial data. Buie led a team of more than 60 observers who battled high winds and cold to set up a “picket fence” of 24 mobile telescopes in a remote region of Chubut and Santa Cruz, Argentina. Their goal: to spot the shadow of the mysterious Kuiper Belt object (KBO) where New Horizons will fly by on New Year’s Day 2019 – to better understand its size, shape, orbit and the environment around it. Before these observations, only the Hubble Space Telescope successfully detected MU69, and even it had not been able to determine MU69’s size or shape.
“It was the most historic occultation on the face of the Earth,” said Jim Green, NASA’s director of planetary science in a congratulatory call to the team. “You pulled it off and you made it happen.” 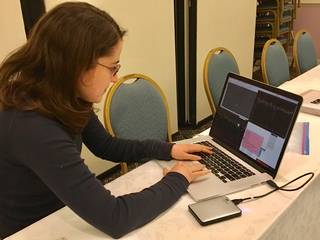 New Horizons Co-Investigator Amanda Zangari was the first occultation campaign scientist to see the telltale signature of MU69 while analyzing data from July 17, saying, “We nailed it spectacularly.”
Credits: NASA/JHUAPL/SwRI/Adriana Ocampo
The first MU69 occultation campaign scientist to see the telltale signature of MU69 was Amanda Zangari, a New Horizons co-investigator from SwRI, who said, “We nailed it spectacularly.”
The New Horizons team enjoyed strong support from Argentinian scientists, government officials, and locals, who went above and beyond to ensure mission success. “I’ve been calling the people who helped us, our ‘twelfth player,’” Buie said. “The Comodoro Rivadavia community came together and did some amazing things for us.” A major national highway was closed for two hours to keep car headlights away. Street lights were turned off to ensure absolute darkness. People like the Intendente or Mayor of the Comodoro parked trucks as wind breaks. Said Buie, “The local people were a major team player.”
“Planning for this complex astronomical deployment started just a few months ago and although the odds seem daunting -- like finding a needle in a haystack -- the team succeeded, thanks to the help of institutions like CONAE (Argentina's National Commission on Space Activities), and all the goodwill of the Argentinian people. This is another example of how space exploration brings out the best in us,” said New Horizons Program Executive Adriana Ocampo.
This was the third of three ambitious occultation observations for New Horizons, and all contributed to the success of the campaign. On June 3, teams in both Argentina and South Africa attempted to observe MU69. On July 10, researchers using NASA’s Stratospheric Observatory for Infrared Astronomy, or SOFIA, studied the environment around MU69 while flying over the Pacific Ocean from Christchurch, New Zealand.
When New Horizons flies by it, MU69 will be the most distant object ever explored by a spacecraft, over a billion miles farther from our sun than Pluto. This ancient Kuiper Belt object is not well understood, because it is faint (likely 14-25 miles or 22-40 kilometers across) and so far away. To study this distant object from Earth, the New Horizons team used Hubble Space Telescope and Gaiasatellite data to calculate where MU69 would cast a shadow on Earth’s surface. Both satellites were crucial to the occultation campaign.
It will take weeks for scientists to analyze the many datasets from the multi-faceted campaign. This advance observation is a critical step in flyby planning before the New Horizons spacecraft arrives at MU69 on Jan. 1, 2019.
“This effort, spanning six months, three spacecraft, 24 portable ground-based telescopes, and NASA’s SOFIA airborne observatory was the most challenging stellar occultation in the history of astronomy, but we did it!” said Alan Stern, New Horizons principal investigator from SwRI. “We spied the shape and size of 2014 MU69 for the first time, a Kuiper Belt scientific treasure we will explore just over 17 months from now. Thanks to this success we can now plan the upcoming flyby with much more confidence.”To see a video of preparations for the July 17 observations in Argentina: tinyurl.com/KBprep
Follow the mission at the NASA New Horizons website, the mission’s KBO Chasers page, and #mu69occ.
Editor: Tricia Talbert
Publicado por salud equitativa en 10:49