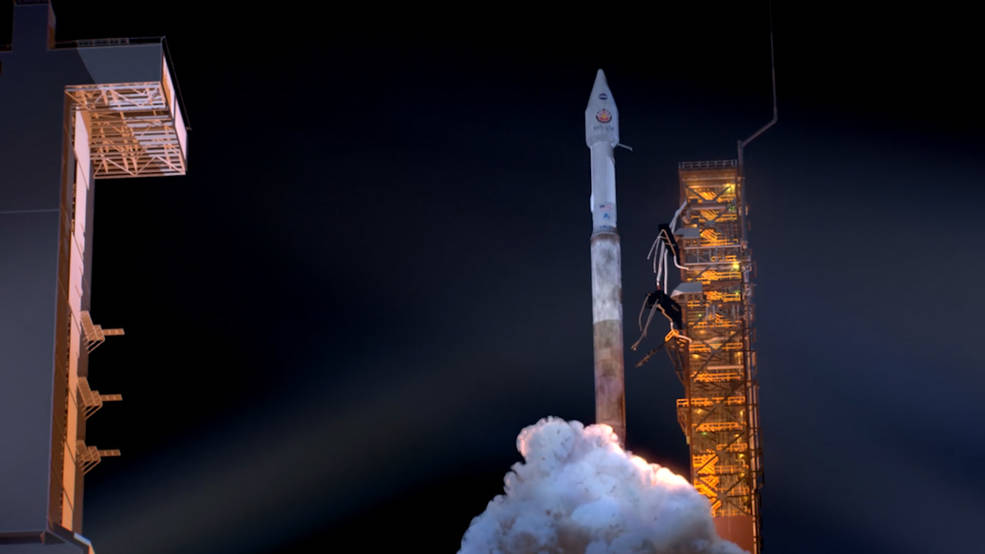 An artist's rendering of a rocket launching with the InSight spacecraft later this May.
Credits: NASA/JPL-Caltech
NASA is about to go on a journey to study the interior of Mars. The space agency held a news conference today at its Jet Propulsion Laboratory (JPL) in Pasadena, California, detailing the next mission to the Red Planet.
Scheduled to launch as early as May 5, NASA’s Interior Exploration using Seismic Investigations, Geodesy and Heat Transport (InSight), a stationary lander, will be the first-ever mission dedicated to exploring Mars' deep interior. It also will be the first NASA mission since the Apollo moon landings to place a seismometer, a device that measures quakes, on the soil of another planet.
For JPL's Bruce Banerdt, principal investigator for InSight, it's also a labor of love. Banerdt has worked more than 25 years to make the mission a reality.
"In some ways, InSight is like a scientific time machine that will bring back information about the earliest stages of Mars' formation 4.5 billion years ago," Banerdt said. "It will help us learn how rocky bodies form, including Earth, its moon, and even planets in other solar systems."
InSight carries a suite of sensitive instruments to gather data and, unlike a rover mission, these instruments require a stationary lander from which they can carefully be placed on and below the Martian surface.
In a sense, Mars is the exoplanet next door – a nearby example of how gas, dust and heat combine and arrange themselves into a planet. Looking deep into Mars will let scientists understand how different its crust, mantle and core are from Earth.
NASA isn't the only agency excited about the mission. Several European partners contributed instruments or instrument components to the InSight mission. France's Centre National d'Études Spatiales led a multinational team that built an ultra-sensitive seismometer for detecting marsquakes. The German Aerospace Center (DLR) developed a thermal probe that can bury itself up to 16 feet (5 meters) underground and measure heat flowing from inside the planet.
"InSight is a truly international space mission," said Tom Hoffman, project manager at JPL. "Our partners have delivered incredibly capable instruments that will make it possible to gather unique science after we land."
InSight currently is at Vandenberg Air Force Base in California undergoing final preparation before launch. On Wednesday, it completed what's known as a spin test: the entire spacecraft is rotated at high speeds to confirm its center of gravity.
That's critical for its entry, descent and landing on Mars in November, Hoffman said. In the next month, the spacecraft will be mounted to its rocket, connections between them will be checked, and the launch team will go through a final training.
"This next month will be exciting," Banerdt said. "We've got some final work to do, but we're almost ready to go to Mars."
JPL manages the InSight Project for NASA's Science Mission Directorate in Washington. Lockheed Martin Space in Denver built and tested the spacecraft. InSight is part of NASA's Discovery Program, which is managed by the agency’s Marshall Space Flight Center in Huntsville, Alabama.
For more information about InSight, visit:
https://www.nasa.gov/insight
-end-
Dwayne Brown / JoAnna WendelHeadquarters, Washington202-358-1726 / 202-358-1003dwayne.c.brown@nasa.gov / joanna.r.wendel@nasa.gov
Andrew GoodJet Propulsion Laboratory, Pasadena, Calif.818-393-2433andrew.c.good@jpl.nasa.gov
Editor: Katherine Brown
Publicado por salud equitativa en 10:05