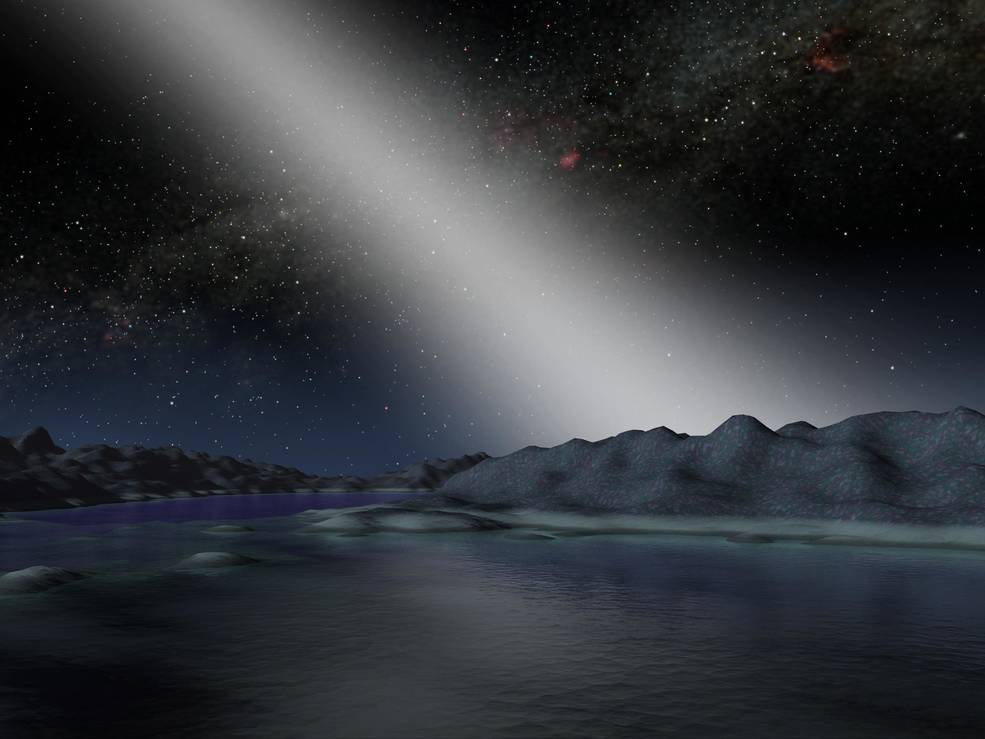 This artist’s illustration shows what the sky might look like from a planet in a particularly dusty solar system. Dust that orbits a star in the plane of the solar system is called zodiacal dust, and the light reflected and scattered by that dust is called zodiacal light. The Hunt for Observable Signatures of Terrestrial Systems, or HOSTS, survey was tasked with learning more about the effect of zodiacal dust on the search for new worlds, to help guide the design of future planet-hunting missions.
Credits: NASA/JPL-Caltech
Full image and caption 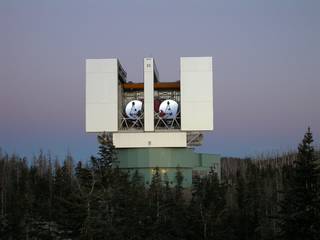 The Large Binocular Telescope Interferometer, or LBTI, is a ground-based instrument connecting two 8-meter class telescopes on Mount Graham in Arizona to form the largest single-mount telescope in the world. The interferometer is designed to detect and study stars and planets outside our solar system.
Credits: NASA/JPL-Caltech
Veils of dust wrapped around distant stars could make it difficult for scientists to find potentially habitable planets in those star systems. The Hunt for Observable Signatures of Terrestrial Systems, or HOSTS, survey was tasked with learning more about the effect of dust on the search for new worlds. The goal is to help guide the design of future planet-hunting missions. In a new paper published in the Astrophysical Journal, HOSTS scientists report on the survey’s initial findings.
Using the Large Binocular Telescope Interferometer, or LBTI, on Mount Graham in Arizona, the HOSTS survey determines the brightness of warm dust floating in the orbital planes of other stars (called exozodiacal dust). In particular, HOSTS has studied dust in nearby stars’ habitable zones, where liquid water could exist on the surface of a planet. The LBTI is five to 10 times more sensitive than the previous telescope capable of detecting exozodiacal dust, the Keck Interferometer Nuller.
Among the findings detailed in the new paper, the HOSTS scientists report that a majority of Sun-like stars in their survey do not possess high levels of dust -- good news for future efforts to study potentially-habitable planets around those stars. A final report on the full HOSTS survey results is expected early next year.
More information about the new findings from HOSTS and the search for Earthlike planets beyond our solar system is available in this news release from the University of Arizona.
The LBTI is funded by NASA's Exoplanet Exploration Program office and managed by the agency's Jet Propulsion Laboratory in Pasadena, California. JPL is a division of Caltech, also in Pasadena. Six JPL scientists co-authored the new research paper. The LBTI is an international collaboration among institutions in the U.S., Italy and Germany, and it is managed and headquartered at the University of Arizona in Tucson.
NASA is taking a multifaceted approach to finding and studying planets outside our solar system. On April 18, NASA launched its newest planet-hunting observatory, the Transiting Exoplanet Survey Satellite (TESS), which is expected to find thousands of new exoplanets, mostly around stars smaller than our Sun.
Calla CofieldJet Propulsion Laboratory, Pasadena, Calif.818-393-1821Calla.e.cofield@jpl.nasa.gov
Doug CarrollUniversity of Arizona, Tucson520-621-9017dougcarroll@email.arizona.edu
2018-080
Editor: Tony Greicius
Publicado por salud equitativa en 10:31