What Uranus Cloud Tops Have in Common With Rotten Eggs | NASA

What Uranus Cloud Tops Have in Common With Rotten Eggs | NASA

Tops Have in Common 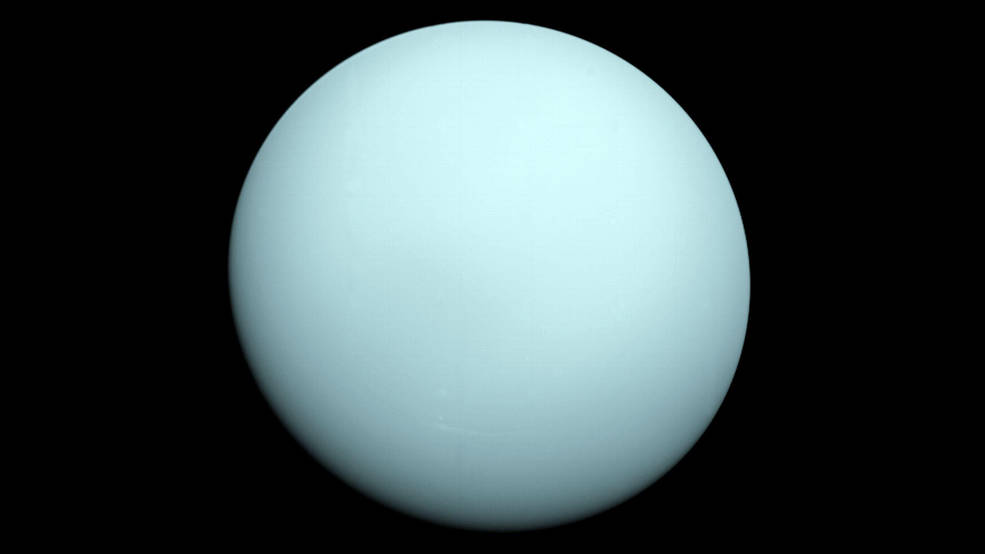 This is an image of the planet Uranus taken by the spacecraft Voyager 2 in 1986. The Voyager project is managed for NASA by the Jet Propulsion Laboratory.
Credits: NASA/JPL-Caltech
Full image and caption
Even after decades of observations and a visit by NASA’s Voyager 2 spacecraft, Uranus held on to one critical secret -- the composition of its clouds. Now, one of the key components of the planet’s clouds has finally been verified.
A global research team that includes Glenn Orton of NASA’s Jet Propulsion Laboratory in Pasadena, California, has spectroscopically dissected the infrared light from Uranus captured by the 26.25-foot (8-meter) Gemini North telescope on Hawaii’s Mauna Kea. They found hydrogen sulfide, the odiferous gas that most people avoid, in Uranus’ cloud tops. The long-sought evidence was published in the April 23rd issue of the journal Nature Astronomy.
The detection of hydrogen sulfide high in Uranus’ cloud deck (and presumably Neptune’s) is a striking difference from the gas giant planets located closer to the Sun -- Jupiter and Saturn -- where ammonia is observed above the clouds, but no hydrogen sulfide. These differences in atmospheric composition shed light on questions about the planets’ formation and history.
“We’ve strongly suspected that hydrogen sulfide gas was influencing the millimeter and radio spectrum of Uranus for some time, but we were unable to attribute the absorption needed to identify it positively. Now, that part of the puzzle is falling into place as well,” Orton said.
The Gemini data, obtained with the Near-Infrared Integral Field Spectrometer (NIFS), sampled reflected sunlight from a region immediately above the main visible cloud layer in Uranus’ atmosphere.
“While the lines we were trying to detect were just barely there, we were able to detect them unambiguously thanks to the sensitivity of NIFS on Gemini, combined with the exquisite conditions on Mauna Kea,” said lead author Patrick Irwin of the University of Oxford, U.K.
No worries, though, that the odor of hydrogen sulfide would overtake human senses. According to Irwin, “Suffocation and exposure in the negative 200 degrees Celsius [392 degrees Fahrenheit] atmosphere made of mostly hydrogen, helium and methane would take its toll long before the smell.”
Read more on the news of Uranus’ atmosphere from Gemini Observatory here.
Caltech in Pasadena, California, manages JPL for NASA.
Gretchen McCartneyJet Propulsion Laboratory, Pasadena, Calif.818-393-6215Gretchen.p.mccartney@jpl.nasa.gov
JoAnna WendelNASA Headquarters, Washington202-358-1003joanna.r.wendel@nasa.govPeter MichaudGemini Observatory, Hilo, Hawaii808-974-2510pmichaud@gemini.edu
2018-079
Editor: Tony Greicius
Publicado por salud equitativa en 10:32