At first glance, NASA’s new spacesuit that will be worn on Artemis missions might look like the suits that astronauts use for spacewalks outside the International Space Station today. However, 21st century moonwalkers will be able to accomplish much more complex tasks than their predecessors, thanks to strides in technological advances that started even before the Apollo program.
Spacesuits are not only a classic icon of human space exploration, they are also a personalized spaceship that mimics all of the protections from the harsh environment of space and the basic resources that Earth and its atmosphere provide.
The new suit that will be worn on Artemis missions is called the Exploration Extravehicular Mobility Unit, or xEMU for short. Its history is a tale of engineering evolution, traced all the way back to the Mercury space suits that were, themselves, upgraded Navy high-altitude flight suits. Here’s a rundown of the 21st century upgrades for the suit that the next moonwalkers will wear on Artemis missions:

Safety is always the top priority for human missions, and thanks to the Apollo explorers and more recent robotic missions, we know more about the lunar environment now than ever before. Until Apollo 11, the greatest concern with the lunar soil was that it wouldn’t support the weight of a lander or the astronauts inside. Now we know that the greater danger is that the soil is composed of tiny glass-like shards, so the new suit has a suite of dust-tolerant features to prevent inhalation or contamination of the suit’s life support system or other spacecraft. The suit also is built to withstand temperature extremes of minus 250 degrees Fahrenheit in the shade and up to 250 degrees in the sun.
The Portable Life Support System is the familiar backpack astronauts wear on spacewalks that houses the suit’s power and breathable air and removes exhaled carbon dioxide and other toxic gasses, odors and moisture from the suit. It also helps regulate temperature and monitors overall suit performance, emitting warnings if resources fall low, or if there is a system failure. Miniaturization of electronics and plumbing systems have made it possible to build in duplicates for much of the system, making some failures less of a concern. The duplication also increases safety and could increase spacewalk durations.

Astronaut Harrison Schmidt stumbles while picking something up on the Moon. The xEMU design provides greater mobility for the Artemis astronauts who will be working on the Moon.
Credits: NASA
Artemis astronauts will be more nimble than ever before with mobility enhancements in the new suits. Bunny-hopping Apollo astronauts are fun to watch, but the exertion required to move around that way was more than NASA would have liked for their explorers who were 250,000 miles from home. The pressure garment is the human shaped portion of the spacesuit that enables astronaut mobility and protects their body from the external environment including, extreme temperatures, radiation, micrometeoroids, and reduced atmospheric pressure. The primary components of the pressure garment are the upper torso, helmet, lower torso and cooling garment.
The new lower torso includes advanced materials and joint bearings that allow bending and rotating at the hips, increased bending at the knees, and hiking-style boots with flexible soles. On the upper torso, In addition to the updated shoulder placement, other shoulder enhancements allow astronauts to move their arms more freely and easily lift objects over their heads or reach across their body in the pressurized suit. Apollo shoulder mobility was enabled by pleats in the fabric with cable pulleys that provided mechanical advantage to move the shoulders up and down but limited the ability to rotate the joint. The new shoulders minimize the effort required for full mobility and include bearings that allow full rotation of the arm from shoulder to wrist.
Inside the helmet, NASA has redesigned the communications system. The headsets, sometimes referred to as the “snoopy caps,” on the suits in use today can become sweaty and uncomfortable inside the helmet, and the microphone doesn’t always track well with the astronaut’s movements. The new audio system includes multiple, embedded, voice-activated microphones inside the upper torso that automatically pick up the astronaut’s voice when they speak to their fellow spacewalker, their crewmates aboard the Gateway, or mission control in Houston. So, no more snoopy cap for our Lunar explorers!
Astronauts will still wear a diaper-like garment during spacewalks that is a combination of commercial products stitched together for maximum absorption. Although space explorers generally prefer to not use it, it is there in the event they need to relieve themselves during a spacewalk that can last many hours.

Modular and Evolvable for Multiple Destinations

The new suit is designed with interchangeable parts that can be configured for spacewalks in microgravity or on a planetary surface. The same core system could be used for the International Space Station, the Gateway in lunar orbit, the Moon, or Mars. The suit could be upgraded for the differences in the Martian environment, including additional technology for life support functionality in the carbon dioxide-rich atmosphere and modified outer garments to keep crew warm in the Mars winter and prevent over heating in the summer season.
A new feature on the improved suit design is the rear-entry hatch. Astronauts will be able to climb into a spacesuit from the back of the suit, which allows the shoulder elements of the hard upper torso to be closer together than the suits currently in use. The improved shoulder placement increases mobility and enables a better fi­t while also reducing the risk of shoulder injuries.
The lower torso, which includes the pants and boots, will be modified from the current suit to accommodate mobility in partial gravity, because astronauts floating in space don’t need to use their legs or feet nearly as much as those walking or driving a rover on a planetary surface.
The helmet on the suits for Artemis missions will also feature a quick-swap protective visor. The clear protective visor is a sacrifi­cial shield that protects the pressurized bubble from any wear and tear or dents and scratches from the abrasive dirt of planetary bodies. The quick-swap function means that astronauts can replace the visor before or after a spacewalk instead of sending an entire helmet back to Earth for repairs.

Custom Fit via Anthropometry and Biomechanics 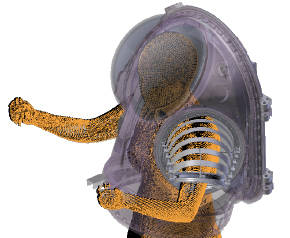 This rendering shows a digital fit check of astronaut with the xEMU upper torso.
Credits: NASA
In the Anthropometry and Biomechanics Facility at NASA’s Johnson Space Center, astronauts undergo full-body, 3D scans while performing basic motions and postures expected during spacewalks. With a complete 3D animated model, NASA can match the astronaut to the modular space suit components that will provide the most comfort and the broadest range of motion, while reducing the potential for skin irritation where the suit might press on the body.

The Space Suit Path to the Lunar South Pole

Space travel is not for the meek. Regardless of the leaps in space suit advancements, astronauts still must conduct complex science and operational activates while wearing their own personal spacecraft. Practicing on Earth helps, but the difference in gravity, pressure and environmental exposure is difficult to truly replicate on the ground.
Before the first woman and next man take step on the lunar South Pole in 2024, NASA will test the new suits and several of its components on the International Space Station in a spaceflight environment to confirm the overall performance.
NASA is prepared to build and certify the initial spacesuits for the first trip to the lunar surface in 2024, as part of the Artemis III mission. After Artemis III, the agency plans to transition responsibility for production, assembly, testing, sustaining and maintenance of a fleet of flight and training spacesuits and associated hardware to U.S. Industry.
For more information about NASA’s Moon to Mars exploration plan, visit:
https://www.nasa.gov/moontomars
See also:
NASA Seeks Industry Input on Hardware Production for Lunar Spacesuit
Spacewalk Spacesuit Basics
Editor: Erin Mahoney
Publicado por salud equitativa en 8:56