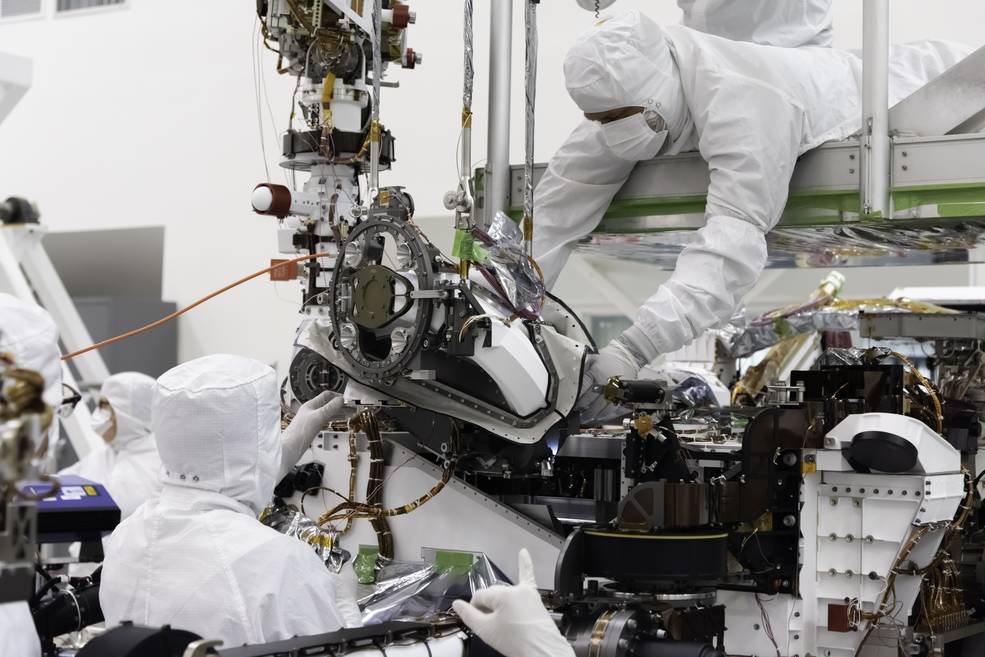 The bit carousel, which lies at the heart of Sample Caching System of NASA's Mars 2020 mission, is attached to the front end of the rover in the Spacecraft Assembly Facility's High Bay 1 at the Jet Propulsion Laboratory in Pasadena, California. The carousel contains all of the tools the coring drill uses to sample the Martian surface and is the gateway for the samples to move into the rover for assessment and processing.
Credits: NASA
NASA released a report Friday with recommendations from the Planetary Protection Independent Review Board (PPIRB) the agency established in response to a recent National Academies of Sciences, Engineering, and Medicine report and a recommendation from the NASA Advisory Council.
With NASA, international, and commercial entities planning bold missions to explore our solar system and return samples to Earth, the context for planetary protection is rapidly changing. NASA established the PPIRB to conduct a thorough review of the agency’s policies.
Planetary protection establishes guidelines for missions to other solar system bodies so they are not harmfully contaminated for scientific purposes by Earth biology and Earth, in turn, is protected from harmful contamination from space.
The board’s report assesses a rapidly changing environment where more samples from other solar system bodies will be returned to Earth, commercial and international entities are discussing new kinds of solar system missions, and NASA’s Artemis program is planning human missions to the Moon and eventually to Mars.
The report discusses 34 findings, and 43 recommendations from the PPIRB, which was chaired by planetary scientist Alan Stern of the Southwest Research Institute to address future NASA missions and proposed missions by other nations and the private sector that include Mars sample return, robotic missions to other bodies, eventual human missions to Mars, and the exploration of ocean worlds in the outer solar system.
“The landscape for planetary protection is moving very fast. It’s exciting now that for the first time, many different players are able to contemplate missions of both commercial and scientific interest to bodies in our solar system,” said Thomas Zurbuchen, associate administrator for NASA’s Science Mission Directorate. “We want to be prepared in this new environment with thoughtful and practical policies that enable scientific discoveries and preserve the integrity of our planet and the places we’re visiting.”
The PPIRB, comprised of a high-level team of 12 experts and stakeholders from science, engineering and industry, examined how to update planetary protection policies and procedures in light of current capabilities. Such guidelines have periodically been updated and inform exploration by spacefaring nations that have signed the Outer Space Treaty since the 1960s.
“Planetary science and planetary protection techniques have both changed rapidly in recent years, and both will likely continue to evolve rapidly,” Stern said. “Planetary protection guidelines and practices need to be updated to reflect our new knowledge and new technologies, and the emergence of new entities planning missions across the solar system. There is global interest in this topic, and we also need to address how new players, for example in the commercial sector, can be integrated into planetary protection.”
NASA plans to begin a dialogue about the PPIRB report’s recommendations with stakeholders, and international and commercial partners to help build a new chapter for conducting planetary missions, and planetary protection policies and procedures.
For more information about Planetary Protection, visit:
https://sma.nasa.gov/sma-disciplines/planetary-protection
To read the full report of the Planetary Protection Independent Review Board, visit:
http://www.nasa.gov/reports
-end-
Grey Hautaluoma / Alana JohnsonHeadquarters, Washington202-358-0668 / 202-358-1501grey.hautaluoma-1@nasa.gov / alana.r.johnson@nasa.gov
Editor: Sean Potter
Publicado por salud equitativa en 11:15