NASA’s MESSENGER mission has unveiled the first global digital elevation model (DEM) of Mercury, revealing in stunning detail the topography across the entire innermost planet and paving the way for scientists to fully characterize Mercury’s geologic history.
The global topographic model is among three new products from the Planetary Data System (PDS), a NASA-funded organization that archives and distributes all of NASA’s planetary mission data to the public. With this 15th and last major data release, the MESSENGER mission has shared more than 10 terabytes of Mercury science data, including nearly 300,000 images, millions of spectra, and numerous map products, along with interactive tools that allow the public to explore those data.
“The wealth of these data, greatly enhanced by the extension of MESSENGER’s primary one-year mission to more than four years, has already enabled and will continue to enable exciting scientific discoveries about Mercury for decades to come,” said Susan Ensor, a software engineer at The Johns Hopkins University Applied Physics Laboratory (APL), in Laurel, Maryland. For the last nine years, Ensor has managed the MESSENGER Science Operations Center, which oversees the collection of data.
The First Global Topography of the Innermost Planet
The new global model complements an older product released by MESSENGER, the topography map derived from earlier measurements by the Mercury Laser Altimeter (MLA). Because of the spacecraft’s highly eccentric orbit, the MLA was able to make primary measurements only in Mercury’s northern hemisphere and near-equatorial region, leaving the topography of most of the southern hemisphere largely unknown, until now.
An animation of the new global digital elevation model (DEM) created from MESSENGER images. Mercury’s surface is colored according the topography of the surface, with regions with higher elevations colored brown, yellow, and red, and regions with lower elevations appearing blue and purple.
Credits: NASA/U.S. Geological Survey/Arizona State University/Carnegie Institution of Washington/JHUAPL
This new model reveals a variety of interesting topographic features, as shown in the animation above, including the highest and lowest points on the planet. The highest elevation on Mercury is at 2.78 miles (4.48 kilometers) above Mercury’s average elevation, located just south of the equator in some of Mercury’s oldest terrain. The lowest elevation, at 3.34 miles (5.38 kilometers) below Mercury’s average, is found on the floor of Rachmaninoff basin, an intriguing double-ring impact basin suspected to host some of the most recent volcanic deposits on the planet.
More than 100,000 images were used to create the new model. During the orbital phase of the MESSENGER mission, images were acquired with a large range of viewing geometries and illumination conditions, which enabled the topography across Mercury’s surface to be determined.
Revealing the Colors of Mercury’s Northern Volcanic Plains
This new map provides an unprecedented view of the region near Mercury’s north pole.
“MESSENGER had previously discovered that past volcanic activity buried this portion of the planet beneath extensive lavas, more than a mile deep in some areas and covering a vast area equivalent to approximately 60 percent of the continental United States,” said APL’s Nancy Chabot, the Instrument Scientist for the Mercury Dual Imaging System (MDIS).
However, because this region is near Mercury’s north pole, the sun is always low on the horizon, casting many long shadows across the scene that can obscure the color characteristics of the rocks. Consequently, MDIS carefully captured images of this portion of the planet when the shadows were minimized through five different narrow-band color filters. Mercury’s northern volcanic plains are revealed in striking color, as shown in the image below. 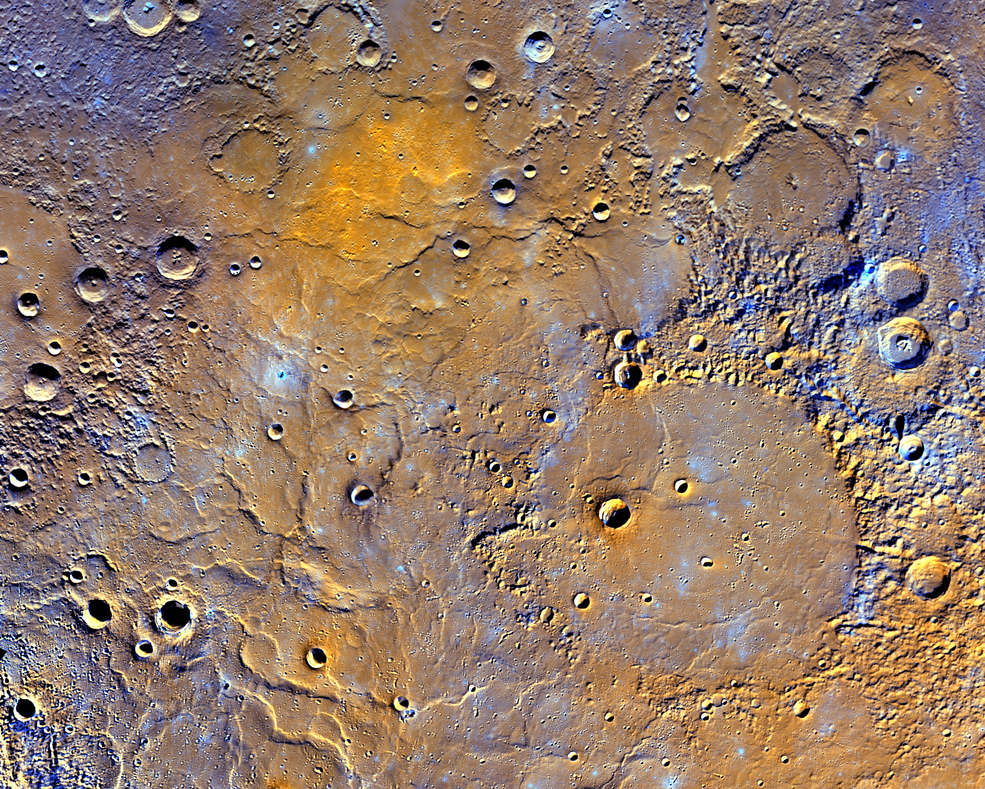 A view of Mercury’s northern volcanic plains is shown in enhanced color to emphasize different types of rocks on Mercury’s surface. In the bottom right portion of the image, the 181-mile- (291-kilometer)-diameter Mendelssohn impact basin, named after the German composer, appears to have been once nearly filled with lava. Toward the bottom left portion of the image, large wrinkle ridges, formed during lava cooling, are visible. Also in this region, the circular rims of impact craters buried by the lava can be identified. Near the top of the image, the bright orange region shows the location of a volcanic vent.
Credits: NASA/JHUAPL/Carnegie Institution of Washington
“This has become one of my favorite maps of Mercury,” Chabot added. “Now that it is available, I’m looking forward to it being used to investigate this epic volcanic event that shaped Mercury’s surface.”
MESSENGER’s Legacy
Though MESSENGER’s orbital operations ended about one year ago, today’s data release is one of the most important milestones for the project. Archiving the extensive MESSENGER data sets in NASA’s Planetary Data System is a lasting legacy of the mission.
“During its four years of orbital observations, MESSENGER revealed the global characteristics of one of our closest planetary neighbors for the first time,” offered MESSENGER Principal Investigator Sean Solomon, Director of Columbia University’s Lamont-Doherty Earth Observatory. “MESSENGER’s scientists and engineers hope that data from the mission will continue to be utilized by the planetary science community for years to come, not only to study the nature of the innermost planet, but to address broader questions about the formation and evolution of the inner solar system more generally.”
Editor: Bill Keeter