In the last century, humans realized that space is filled with types of light we can’t see – from infrared signals released by hot stars and galaxies, to the cosmic microwave background that comes from every corner of the universe. Some of this invisible light that fills space takes the form of X-rays, the source of which has been hotly contended over the past few decades.
It wasn’t until the flight of the DXL sounding rocket, short for Diffuse X-ray emission from the Local galaxy, that scientists had concrete answers about the X-rays’ sources. In a new study, published Sept. 23, 2016, in the Astrophysical Journal, DXL’s data confirms some of our ideas about where these X-rays come from, in turn strengthening our understanding of our solar neighborhood’s early history. But it also reveals a new mystery – an entire group of X-rays that don’t come from any known source.

NASA-funded researchers sent a sounding rocket through the sun’s dense helium wake, called the helium-focusing cone, to understand the origin of certain X-rays in space. (Conceptual graphic not to scale.)
Credits: NASA Goddard's Conceptual Image Lab/Lisa Poje
The two known sources of X-ray emission are the solar wind, the sea of solar material that fills the solar system, and the Local Hot Bubble, a theorized area of hot interstellar material that surrounds our solar system.
“We show that the X-ray contribution from the solar wind charge exchange is about forty percent in the galactic plane, and even less elsewhere,” said Massimiliano Galeazzi, an astrophysicist at the University of Miami and an author on the study. “So the rest of the X-rays must come from the Local Hot Bubble, proving that it exists.”
However, DXL also measured some high-energy X-rays that couldn’t possibly come from the solar wind or the Local Hot Bubble.
“At higher energies, these sources contribute less than a quarter of the X-ray emission,” said Youaraj Uprety, lead author on the study and an astrophysicist at University of Miami at the time the research was conducted. “So there’s an unknown source of X-rays in this energy range.”
In the decades since we first discovered the X-ray emission that permeates space, three main theories have been bandied about to explain its origins. First, and quickly ruled out, was the idea that these X-rays are a kind of background noise, coming from the distant reaches of the universe. Our galaxy has lots of neutral gas that would absorb X-rays coming from distant sources – meaning that these X-rays must originate somewhere near our solar system. 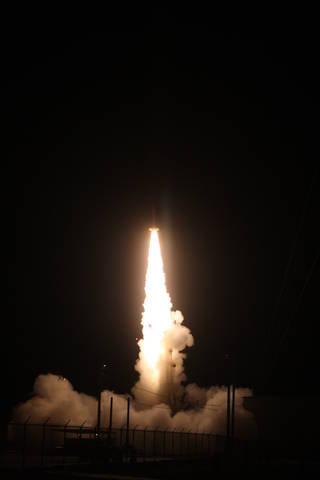 The Diffuse X-ray emission from the Local galaxy, or DXL, sounding rocket launched from White Sands Missile Range in New Mexico on Dec. 13, 2012, to study the source of certain X-rays observed near Earth.
Credits: White Sands Missile Range, Visual Information Branch
So what could produce this kind of X-ray so close to our solar system? Scientists theorized that there was a huge bubble of hot ionized gas enveloping our solar system, with electrons energetic enough that they could release X-rays like this. They called this structure the Local Hot Bubble.
“We think that around 10 million years ago, a supernova exploded and ionized the gas of the Local Hot Bubble,” said Galeazzi. “But one supernova wouldn’t be enough to create such a large cavity and reach these temperatures – so it was probably two or three supernova over time, one inside the other.”
The Local Hot Bubble was the prevailing theory for many years. Then, in the late 1990s, scientists discovered another source of X-rays – a process called solar wind charge exchange.
Our sun is constantly releasing solar material in all directions, a flow of charged particles called the solar wind. Like the sun, the solar wind is made up of ionized gas, where electrons and ions have separated. This means that the solar wind can carry electric and magnetic fields.
When the charged solar wind interacts with pockets of neutral gas, where the electrons and ions are still tightly bound together, it can pick up electrons from these neutral particles, exciting them. As these electrons settle back into a stable state, they lose energy in the form of X-rays – the same type of X-rays that had been thought to come from the Local Hot Bubble.
The discovery of this solar wind X-ray source posed a problem for the Local Hot Bubble theory, since the only indication that it existed were these X-ray observations. But if the hot bubble did exist, it could tell us a lot about how our corner of the galaxy formed.
“Identifying the X-ray contribution of the Local Hot Bubble is important for understanding the structure surrounding our solar system,” said Uprety, who is now an astrophysicist at Middle Tennessee State University. “It helps us build better models of the interstellar material in our solar neighborhood.”
Distinguishing between X-rays from the solar wind and X-rays from the Local Hot Bubble was a challenge – that’s where DXL comes in. DXL flew on what's called a sounding rocket, which flies for some 15 minutes. These few minutes of observing time above Earth’s atmosphere are valuable, since Earth’s blocks most of these X-rays, making observations like this impossible from the ground. Such short-duration sounding rockets provide a relatively inexpensive way to gather robust space observations.
DXL is the second spacecraft to measure the X-rays in question, but unlike the previous mission – a satellite called ROSAT – DXL flew at a time when Earth was passing through something called the helium-focusing cone. The helium-focusing cone is a region of space where neutral helium is several times denser than in the rest of the inner solar system.
“The solar system is moving through interstellar space at about 15 miles per second,” said Uprety. “This space is filled with hydrogen and helium. The helium is a little heavier, so it carves around the sun to form a tail.”
Because solar wind charge exchange is dependent on having lots of neutral material to interact with, measuring X-rays in the helium-focusing cone could help scientists definitively determine how much of the X-ray emission comes from the solar wind, and how much – if any – comes from the Local Hot Bubble.
DXL’s data revealed that about forty percent of most observed X-rays come from the solar wind. But in higher energy ranges, some X-rays are still unexplained. DXL’s observations show that less than a quarter of the X-ray emission at higher energy levels comes from the solar wind, and the Local Hot Bubble isn’t a good explanation either.
“The temperature of the Local Hot Bubble is not high enough to produce X-rays in this energy range,” said Uprety. “So we’re left with an open question on the source of these X-rays.”
DXL launched from White Sands Missile Range in New Mexico on Dec. 13, 2012. DXL is supported through NASA's Sounding Rocket Program at the agency's Wallops Flight Facility at Wallops Island, Virginia, which is managed by NASA's Goddard Space Flight Center in Greenbelt, Maryland. NASA'sHeliophysics Division manages the sounding-rocket program for the agency.
Related Links
Editor: Rob Garner
el dispensador dice:
cada eslabón a su cadena...
SEPTIEMBRE 23, 2016.-
Publicado por salud equitativa en 8:44