Using data from NASA's Fermi Gamma-ray Space Telescope and other facilities, an international team of scientists has found the first gamma-ray binary in another galaxy and the most luminous one ever seen. The dual-star system, dubbed LMC P3, contains a massive star and a crushed stellar core that interact to produce a cyclic flood of gamma rays, the highest-energy form of light.
"Fermi has detected only five of these systems in our own galaxy, so finding one so luminous and distant is quite exciting," said lead researcher Robin Corbet at NASA's Goddard Space Flight Center in Greenbelt, Maryland. "Gamma-ray binaries are prized because the gamma-ray output changes significantly during each orbit and sometimes over longer time scales. This variation lets us study many of the emission processes common to other gamma-ray sources in unique detail."
These rare systems contain either a neutron star or a black hole and radiate most of their energy in the form of gamma rays. Remarkably, LMC P3 is the most luminous such system known in gamma rays, X-rays, radio waves and visible light, and it's only the second one discovered with Fermi.
Dive into the Large Magellanic Cloud and see a visualization of LMC P3, an extraordinary gamma-ray binary system discovered by NASA's Fermi Gamma-ray Space Telescope.
Credits: NASA's Goddard Space Flight Center/Scott Wiessinger, producer
Download this video in HD formats from NASA Goddard's Scientific Visualization Studio
A paper describing the discovery will appear in the Oct. 1 issue of The Astrophysical Journal and is now available online.
LMC P3 lies within the expanding debris of a supernova explosion located in the Large Magellanic Cloud (LMC), a small nearby galaxy about 163,000 light-years away. In 2012, scientists using NASA's Chandra X-ray Observatory found a strong X-ray source within the supernova remnant and showed that it was orbiting a hot, young star many times the sun's mass. The researchers concluded the compact object was either a neutron star or a black hole and classified the system as a high-mass X-ray binary (HMXB).
In 2015, Corbet's team began looking for new gamma-ray binaries in Fermi data by searching for the periodic changes characteristic of these systems. The scientists discovered a 10.3-day cyclic change centered near one of several gamma-ray point sources recently identified in the LMC. One of them, called P3, was not linked to objects seen at any other wavelengths but was located near the HMXB. Were they the same object? 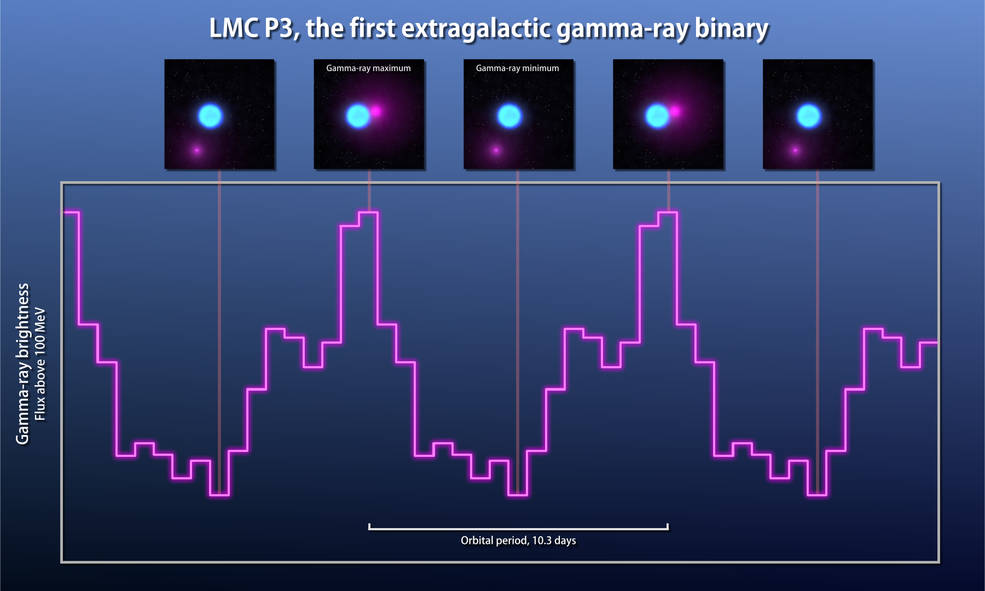 Observations from Fermi's Large Area Telescope (magenta line) show that gamma rays from LMC P3 rise and fall over the course of 10.3 days. The companion is thought to be a neutron star. Illustrations across the top show how the changing position of the neutron star relates to the gamma-ray cycle.
Credits: NASA's Goddard Space Flight Center
To find out, Corbet's team observed the binary in X-rays using NASA's Swift satellite, at radio wavelengths with the Australia Telescope Compact Array near Narrabri and in visible light using the 4.1-meter Southern Astrophysical Research Telescope on Cerro Pachón in Chile and the 1.9-meter telescope at theSouth African Astronomical Observatory near Cape Town.
The Swift observations clearly reveal the same 10.3-day emission cycle seen in gamma rays by Fermi. They also indicate that the brightest X-ray emission occurs opposite the gamma-ray peak, so when one reaches maximum the other is at minimum. Radio data exhibit the same period and out-of-phase relationship with the gamma-ray peak, confirming that LMC P3 is indeed the same system investigated by Chandra.
"The optical observations show changes due to binary orbital motion, but because we don't know how the orbit is tilted into our line of sight, we can only estimate the individual masses," said team member Jay Strader, an astrophysicist at Michigan State University in East Lansing. "The star is between 25 and 40 times the sun's mass, and if we're viewing the system at an angle midway between face-on and edge-on, which seems most likely, its companion is a neutron star about twice the sun's mass." If, however, we view the binary nearly face-on, then the companion must be significantly more massive and a black hole. 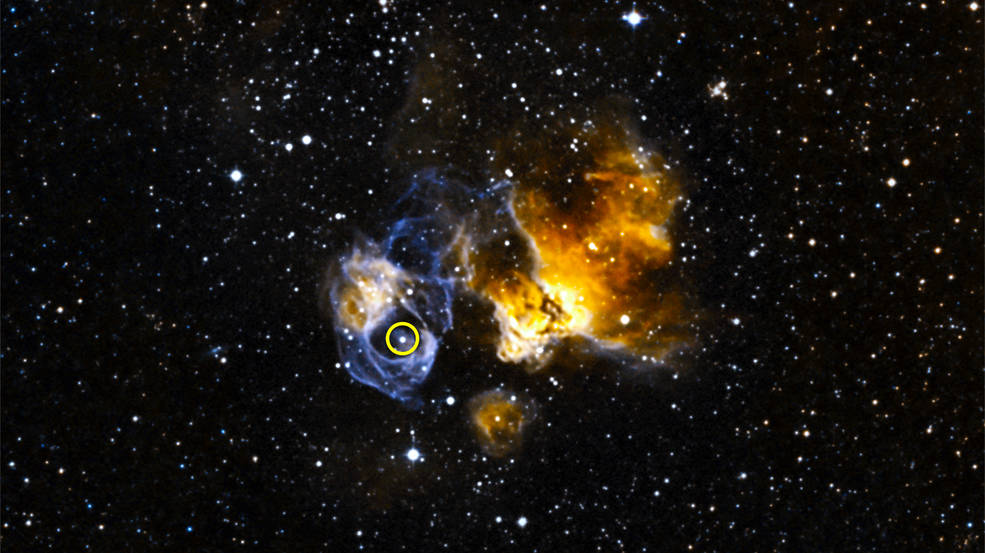 LMC P3 (circled) is located in a supernova remnant called DEM L241 in the Large Magellanic Cloud, a small galaxy about 163,000 light-years away. The system is the first gamma-ray binary discovered in another galaxy and is the most luminous known in gamma rays, X-rays, radio waves and visible light.
Unlabeled image
Both objects form when a massive star runs out of fuel, collapses under its own weight and explodes as a supernova. The star's crushed core may become a neutron star, with the mass of half a million Earths squeezed into a ball no larger than Washington, D.C. Or it may be further compacted into a black hole, with a gravitational field so strong not even light can escape it.
The surface of the star at the heart of LMC P3 has a temperature exceeding 60,000 degrees Fahrenheit (33,000 degrees Celsius), or more than six times hotter than the sun's. The star is so luminous that pressure from the light it emits actually drives material from the surface, creating particle outflows with speeds of several million miles an hour.
In gamma-ray binaries, the compact companion is thought to produce a "wind" of its own, one consisting of electrons accelerated to near the speed of light. The interacting outflows produce X-rays and radio waves throughout the orbit, but these emissions are detected most strongly when the compact companion travels along the part of its orbit closest to Earth.
Through a different mechanism, the electron wind also emits gamma rays. When light from the star collides with high-energy electrons, it receives a boost to gamma-ray levels. Called inverse Compton scattering, this process produces more gamma rays when the compact companion passes near the star on the far side of its orbit as seen from our perspective.
Prior to Fermi's launch, gamma-ray binaries were expected to be more numerous than they've turned out to be. Hundreds of HMXBs are cataloged, and these systems are thought to have originated as gamma-ray binaries following the supernova that formed the compact object.
"It is certainly a surprise to detect a gamma-ray binary in another galaxy before we find more of them in our own," said Guillaume Dubus, a team member at the Institute of Planetology and Astrophysics of Grenoble in France. "One possibility is that the gamma-ray binaries Fermi has found are rare cases where a supernova formed a neutron star with exceptionally rapid spin, which would enhance how it produces accelerated particles and gamma rays."
NASA's Fermi Gamma-ray Space Telescope is an astrophysics and particle physics partnership, developed in collaboration with the U.S. Department of Energy and with important contributions from academic institutions and partners in France, Germany, Italy, Japan, Sweden and the United States.
By Francis Reddy
NASA's Goddard Space Flight Center, Greenbelt, Md.
Editor: Rob Garner