While it often seems unvarying from our viewpoint on Earth, the sun is constantly changing. Material courses through not only the star itself, but throughout its expansive atmosphere. Understanding the dance of this charged gas is a key part of better understanding our sun – how it heats up its atmosphere, how it creates a steady flow of solar wind streaming outward in all directions, and how magnetic fields twist and turn to create regions that can explode in giant eruptions. Now, for the first time, researchers have tracked a particular kind of solar wave as it swept upward from the sun's surface through its atmosphere, adding to our understanding of how solar material travels throughout the sun.

Scientists analyzed sunspot images from a trio of observatories -- including the Big Bear Solar Observatory, which captured this footage -- to make the first-ever observations of a solar wave traveling up into the sun’s atmosphere from a sunspot.
Credits: BBSO/Zhao et al
Tracking solar waves like this provides a novel tool for scientists to study the atmosphere of the sun. The imagery of the journey also confirms existing ideas, helping to nail down the existence of a mechanism that moves energy – and therefore heat – into the sun’s mysteriously-hot upper atmosphere, called the corona. A study on these results was published Oct. 11, 2016, in The Astrophysical Journal Letters.
“We see certain kinds of solar seismic waves channeling upwards into the lower atmosphere, called the chromosphere, and from there, into the corona,” said Junwei Zhao, a solar scientist at Stanford University in Stanford, California, and lead author on the study. “This research gives us a new viewpoint to look at waves that can contribute to the energy of the atmosphere.”
The study makes use of the wealth of data captured by NASA’s Solar Dynamics Observatory, NASA’s Interface Region Imaging Spectrograph, and the Big Bear Solar Observatory in Big Bear Lake, California. Together, these observatories watch the sun in 16 wavelengths of light that show the sun’s surface and lower atmosphere. SDO alone captures 11 of these.
“SDO takes images of the sun in many different wavelengths at a high time resolution,” said Dean Pesnell, SDO project scientist at NASA’s Goddard Space Flight Center in Greenbelt, Maryland. “That lets you see the frequencies of these waves – if you didn’t have such rapid-fire images, you’d lose track of the waves from one image to the next.”
Though scientists have long suspected that the waves they spot in the sun’s surface, called the photosphere, are linked to those seen in the lowest reaches of the sun’s atmosphere, called the chromosphere, this new analysis is the first time that scientists have managed to actually watch the wave travel up through the various layers into the sun’s atmosphere.
When material is heated to high temperatures, it releases energy in the form of light. The type, or wavelength, of that light is determined by what the material is, as well as its temperature.  That means different wavelengths from the sun can be mapped to different temperatures of solar material. Since we know how the sun’s temperature changes throughout the layers of its atmosphere, we can then order these wavelengths according to their height above the surface – and essentially watch solar waves as they travel upwards.
The implications of this study are twofold – first, this technique for watching the waves itself gives scientists a new tool to understand the sun’s lower atmosphere.
“Watching the waves move upwards tells us a lot about the properties of the atmosphere above sunspots – like temperature, pressure, and density,” said Ruizhu Chen, a graduate student scientist at Stanford who is an author on the study. “More importantly, we can figure out the magnetic field strength and direction.” 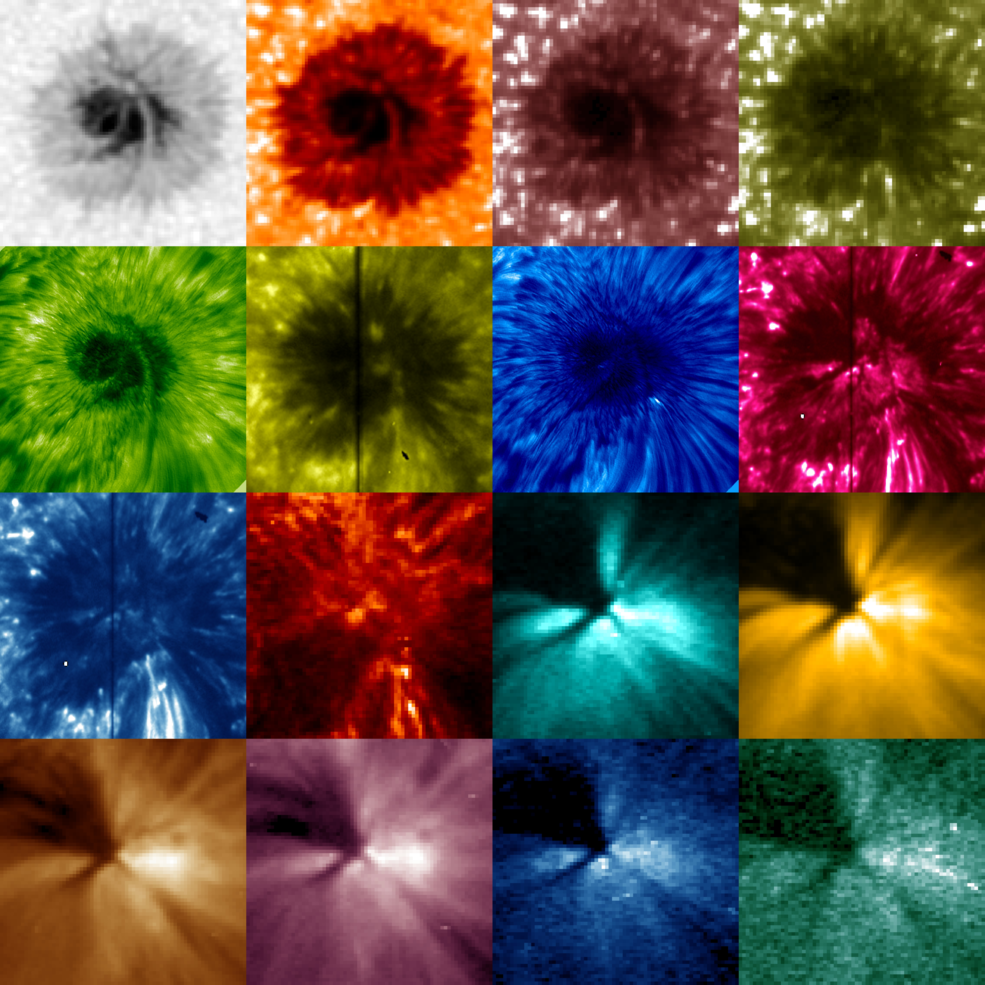 Scientists used data from NASA’s Solar Dynamics Observatory, NASA’s Interface Region Imaging Spectrograph, and the Big Bear Solar Observatory to track a solar wave as it channeled upwards from the sun’s surface into the atmosphere.
Credits: Zhao et al/NASA/SDO/IRIS/BBSO
The effect of the magnetic field on these waves is pronounced. Instead of traveling straight upwards through the sun, the waves veer off, taking a curved path through the atmosphere.
“The magnetic field is acting like railroad tracks, guiding the waves as they move up through the atmosphere,” said Pesnell, who was not involved in this study.
The second implication of this new research is for a long-standing question in solar physics – the coronal heating problem.
The sun produces energy by fusing hydrogen at its core, so the simplest models suggest that each layer of the sun should be cooler as you move outward. However, the sun’s atmosphere, called the corona, is about a hundred times hotter than the region below – counter to what you would expect.
No one has as-yet been able to definitively pinpoint the source of all the extra heat in the corona, but these waves may play a small role.
“When a wave travels upwards, a number of different things can happen,” said Zhao. “Some may reflect back downwards, or contribute to heating – but by how much, we don’t yet know.”
NASA Goddard built, operates and manages the SDO spacecraft for NASA's Science Mission Directorate in Washington. Lockheed Martin designed the IRIS observatory and manages the mission for NASA. The Big Bear Solar Observatory is operated by the New Jersey Institute of Technology in Newark, New Jersey.
Related:
By Sarah Frazier
NASA’s Goddard Space Flight Center, Greenbelt, Md.
Editor: Karl Hille