Astronomers using observations from NASA's Kepler and Swift missions have discovered a batch of rapidly spinning stars that produce X-rays at more than 100 times the peak levels ever seen from the sun. The stars, which spin so fast they've been squashed into pumpkin-like shapes, are thought to be the result of close binary systems where two sun-like stars merge.
Dive into the Kepler field and learn more about the origins of these rapidly spinning stars.
Credits: Credits: NASA's Goddard Space Flight Center/Scott Wiessinger, producer
Download this video in HD formats from NASA Goddard's Scientific Visualization Studio
"These 18 stars rotate in just a few days on average, while the sun takes nearly a month," said Steve Howell, a senior research scientist at NASA's Ames Research Center in Moffett Field, California, and leader of the team. "The rapid rotation amplifies the same kind of activity we see on the sun, such as sunspots and solar flares, and essentially sends it into overdrive."
The most extreme member of the group, a K-type orange giant dubbed KSw 71, is more than 10 times larger than the sun, rotates in just 5.5 days, and produces X-ray emission 4,000 times greater than the sun does at solar maximum. 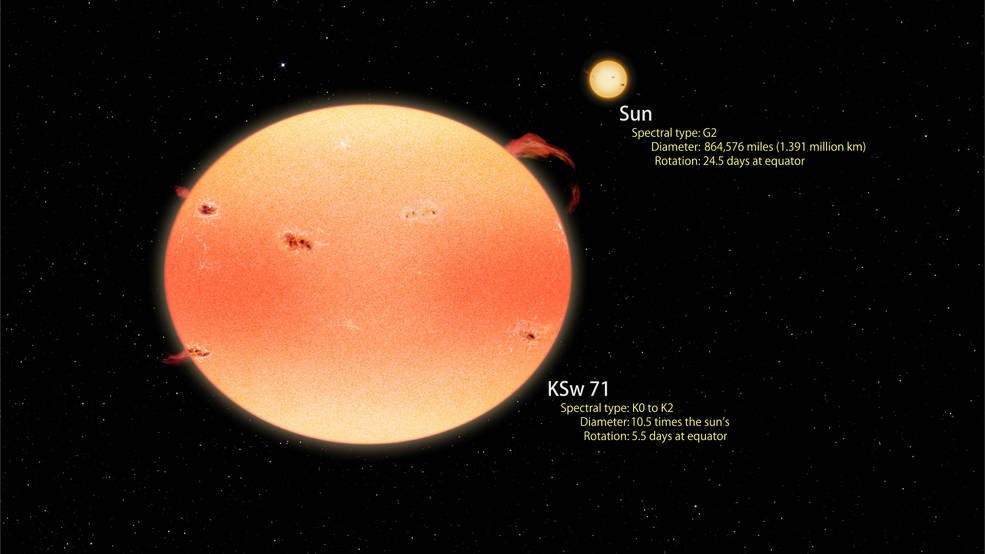 This artist's concept illustrates how the most extreme "pumpkin star" found by Kepler and Swift compares with the sun. Both stars are shown to scale. KSw 71 is larger, cooler and redder than the sun and rotates four times faster. Rapid spin causes the star to flatten into a pumpkin shape, which results in brighter poles and a darker equator. Rapid rotation also drives increased levels of stellar activity such as starspots, flares and prominences, producing X-ray emission over 4,000 times more intense than the peak emission from the sun. KSw 71 is thought to have recently formed following the merger of two sun-like stars in a close binary system.
Credits: NASA's Goddard Space Flight Center/Francis Reddy
These rare stars were found as part of an X-ray survey of the original Kepler field of view, a patch of the sky comprising parts of the constellations Cygnus and Lyra. From May 2009 to May 2013, Kepler measured the brightness of more than 150,000 stars in this region to detect the regular dimming from planets passing in front of their host stars. The mission was immensely successful, netting more than 2,300 confirmed exoplanets and nearly 5,000 candidates to date. An ongoing extended mission, called K2, continues this work in areas of the sky located along the ecliptic, the plane of Earth's orbit around the sun.
"A side benefit of the Kepler mission is that its initial field of view is now one of the best-studied parts of the sky," said team member Padi Boyd, a researcher at NASA's Goddard Space Flight Center in Greenbelt, Maryland, who designed the Swift survey. For example, the entire area was observed in infrared light by NASA's Wide-field Infrared Survey Explorer, and NASA's Galaxy Evolution Explorer observed many parts of it in the ultraviolet. "Our group was looking for variable X-ray sources with optical counterparts seen by Kepler, especially active galaxies, where a central black hole drives the emissions," she explained.
Using the X-ray and ultraviolet/optical telescopes aboard Swift, the researchers conducted the Kepler–Swift Active Galaxies and Stars Survey (KSwAGS), imaging about six square degrees, or 12 times the apparent size of a full moon, in the Kepler field.
"With KSwAGS we found 93 new X-ray sources, about evenly split between active galaxies and various types of X-ray stars," said team member Krista Lynne Smith, a graduate student at the University of Maryland, College Park who led the analysis of Swift data. "Many of these sources have never been observed before in X-rays or ultraviolet light."
For the brightest sources, the team obtained spectra using the 200-inch telescope at Palomar Observatory in California. These spectra provide detailed chemical portraits of the stars and show clear evidence of enhanced stellar activity, particularly strong diagnostic lines of calcium and hydrogen.
The researchers used Kepler measurements to determine the rotation periods and sizes for 10 of the stars, which range from 2.9 to 10.5 times larger than the sun. Their surface temperatures range from somewhat hotter to slightly cooler than the sun, mostly spanning spectral types F through K. Astronomers classify the stars as subgiants and giants, which are more advanced evolutionary phases than the sun's caused by greater depletion of their primary fuel source, hydrogen. All of them eventually will become much larger red giant stars.
A paper detailing the findings will be published in the Nov. 1 edition of the Astrophysical Journal and is now available online.
Forty years ago, Ronald Webbink at the University of Illinois, Urbana-Champaign noted that close binary systems cannot survive once the fuel supply of one star dwindles and it starts to enlarge. The stars coalesce to form a single rapidly spinning star initially residing in a so-called "excretion" disk formed by gas thrown out during the merger. The disk dissipates over the next 100 million years, leaving behind a very active, rapidly spinning star.
Howell and his colleagues suggest that their 18 KSwAGS stars formed by this scenario and have only recently dissipated their disks. To identify so many stars passing through such a cosmically brief phase of development is a real boon to stellar astronomers.
"Webbink's model suggests we should find about 160 of these stars in the entire Kepler field," said co-author Elena Mason, a researcher at the Italian National Institute for Astrophysics Astronomical Observatory of Trieste. "What we have found is in line with theoretical expectations when we account for the small portion of the field we observed with Swift."
The team has already extended their Swift observations to additional fields mapped by the K2 mission.
Ames manages the Kepler and K2 missions for NASA’s Science Mission Directorate. NASA's Jet Propulsion Laboratory in Pasadena, California, managed Kepler mission development. Ball Aerospace & Technologies Corp. operates the flight system with support from the Laboratory for Atmospheric and Space Physics at the University of Colorado in Boulder.
Goddard manages the Swift mission in collaboration with Pennsylvania State University in University Park, the Los Alamos National Laboratory in New Mexico and Orbital Sciences Corp. in Dulles, Virginia. Other partners include the University of Leicester and Mullard Space Science Laboratory in the United Kingdom, Brera Observatory and the Italian Space Agency in Italy, with additional collaborators in Germany and Japan.
Related Links
By Francis ReddyNASA's Goddard Space Flight Center, Greenbelt, Md.
Editor: Rob Garner
Publicado por salud equitativa en 9:56