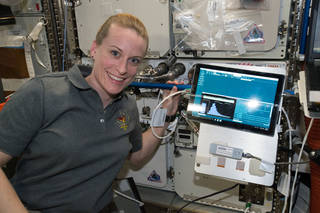 NASA astronaut Kate Rubins poses for a picture with the minION device during the first sample initialization run of the Biomolecular Sequencer investigation.
Credits: NASA 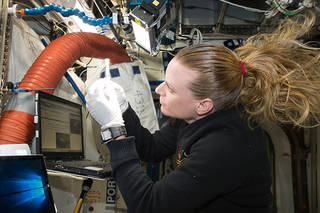 NASA astronaut Kate Rubins not only became the first person to sequence DNA in space, but the sequenced more than a billion bases during her time aboard the space station.
Credits: NASA 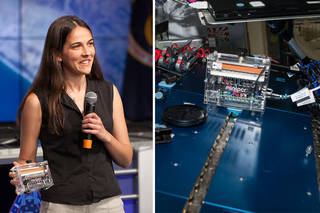 Student Anna-Sophia Boguraev, winner of the Genes in Space competition, is pictured with the miniPCR device. The miniPCR will be used with the minION to prepare, sequence and identify a microorganism from start to finish aboard the space station.
Credits: NASA
Building on the ability to sequence DNA in space and previous investigations, Genes in Space-3 is a collaboration to prepare, sequence and identify unknown organisms, entirely from space. When NASA astronaut Kate Rubins sequenced DNA aboard the International Space Station in 2016, it was a game changer. That first-ever sequencing of DNA in space was part of the Biomolecule Sequencer investigation.
Although it’s not as exciting as a science fiction movie may depict, the walls and surfaces of the space station do experience microbial growth from time to time. Currently, the only way to identify contaminants is to take a sample and send it back to Earth.
“We have had contamination in parts of the station where fungi was seen growing or biomaterial has been pulled out of a clogged waterline, but we have no idea what it is until the sample gets back down to the lab,” said Sarah Wallace, NASA microbiologist and the project’s principal investigator at the agency’s Johnson Space Center in Houston.
“On the ISS, we can regularly resupply disinfectants, but as we move beyond low-Earth orbit where the ability for resupply is less frequent, knowing what to disinfect or not becomes very important,” said Wallace.
Developed in partnership by NASA’s Johnson Space Center and Boeing, this ISS National Lab sponsored investigation will marry two pieces of existing spaceflight technology, miniPCR and theMinION, to change that process, allowing for the first unknown biological samples to be prepared, sequenced and then identified in space.
The miniPCR (polymerase chain reaction) device was first used aboard the station during the Genes in Space-1, and, soon to be Genes in Space-2 investigations, student-designed experiments in the Genes in Space program. Genes in Space-1 successfully demonstrated the device could be used in microgravity to amplify DNA, a process used to create thousands of copies of specific sections of DNA. The second investigation arrived at the space station on April 22, and will be tested this summer.
Next came the Biomolecule Sequencer investigation, which successfully tested the MinION’s ability to sequence strands of Earth-prepared DNA in an orbiting laboratory.
“What the coupling of these different devices is doing is allowing us to take the lab to the samples, instead of us having to bring the samples to the lab,” said Aaron Burton, NASA biochemist and Genes in Space-3 co-investigator.
Crew members will collect a sample from within the space station to be cultured aboard the orbiting laboratory. The sample will then be prepared for sequencing, in a process similar to the one used during the Genes in Space-1 investigation, using the miniPCR and finally, sequenced and identified using the MinION device.
“The ISS is very clean,” said Sarah Stahl, microbiologist and project scientist. “We find a lot of human-associated microorganisms - a lot of common bacteria such as Staphylococcus and Bacillus and different types of familiar fungi like Aspergillus and Penicillium.”
In addition to identifying microbes in space, this technology could be used to diagnose crew member wounds or illnesses in real time, help identify DNA-based life on other planets and help with other investigations aboard the station.
“The Genes in Space-3 process will increase the scientific capacity of the ISS by facilitating state-of-the-art molecular biology research for both current and next generation ISS researchers,” said Kristen John, NASA aerospace engineer and Genes in Space-3 project engineer. “The team has put a strong focus on generating a spaceflight-certified catalog of general laboratory items and reagents, and developing common methods and easily customizable reaction conditions for miniPCR and the MinION to enable other ISS researchers to use this technology.”
This process will give scientists on the ground real-time access to the experiments going on in space, allowing for more accuracy and a more efficient use of the time on the space station.
“If you could get a snapshot of the molecular signatures of your research as it was occurring on the ISS, how would you change your experiment?” said Wallace. “Would you change your time points? Provide a different nutrient? Alter growth conditions? You can imagine how, if you had that data, you could adjust your experiment to enhance the insight being gained.”
Closer to home, this process can be used to provide real-time diagnosis of viruses in areas of the world where access to a laboratory may not be possible.
The ISS National Laboratory is managed by the Center for the Advancement of Science in Space (CASIS). For more information about research happening aboard the space station, follow @ISS_Research.
Jenny HowardInternational Space Station Program Science OfficeJohnson Space Center
Editor: Kristine Rainey 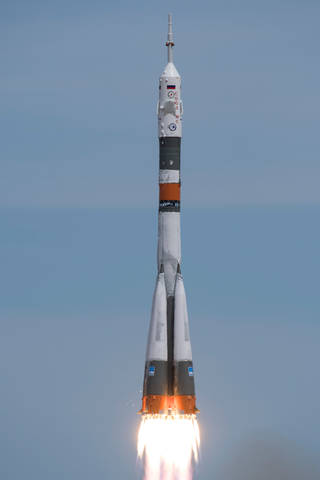 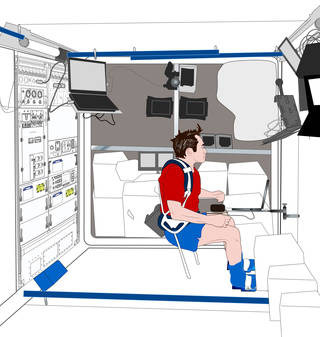 This illustration shows the configuration for conducting neurocognitive assessments for the Neuromapping study aboard the International Space Station.
Credits: NASA
(Highlights: Week of April 17, 2017) - As the International Space Station welcomed two new crew members – NASA astronaut Jack Fischer and Russian cosmonaut Fyodor Yurchikhin -- and a resupply spacecraft, important science investigations continued, including another push to make space travelers more self-sufficient while exploring deep space.
A ground team commanded the Additive Manufacturing Facility (Manufacturing Device) on the space station to print two items over the course of the week. Installed on the station in 2015, the Manufacturing Device is a 3-D printer that uses additive manufacturing to build a part layer by layer using an engineered plastic polymer as raw material.
The Manufacturing Device is another step toward a permanent manufacturing capability on the space station. It will enable the production of components and tools on demand in orbit, which will allow further research into manufacturing for long-term missions. The station crew can use it to print a variety of items to perform maintenance, build tools and repair sections in case of an emergency, leading to a reduction in cost, mass, labor and production time. Further research will also help develop this advanced technology for use on Earth.
NASA astronaut Peggy Whitson performed maintenance on the Microgravity Experiment Research Locker Incubator (MERLIN), replacing some of the desiccant inside to keep the experiments contained inside dry. MERLIN is a locker that can provide a thermally controlled environment for investigations in orbit to both extremes – both as an incubator and as a freezer. It is designed to operate with minimal crew interaction by most of the controls being commanded from the ground.
Among the other human research investigations, Whitson completed another session with the Spaceflight Effects on Neurocognitive Performance: Extent, Longevity, and Neural Bases (NeuroMapping) investigation. This study looks at whether long-duration spaceflight causes any changes to the brain, including brain structure and function, motor control, and multi-tasking, as well as measuring how long it takes for the brain and body to recover from those possible changes. Previous research and anecdotal evidence from crewmembers returning from a long-duration mission have shown that movement control and cognition are affected in microgravity. The NeuroMapping investigation uses structural and functional magnetic resonance brain imaging to assess any changes to crewmembers after long-duration missions. This may also provide additional insight into research on the neural mechanisms associated with behavioral and physiological changes, as well as brain rehabilitation after injury.
Other human research investigations conducted this week include Actiwatch Spectrum, Fluid Shifts, Habitability, and Dose Tracker.
Progress was made on other investigations, outreach activities, and facilities this week, including Device for the study of Critical Liquids and Crystallization (DECLIC HTI-R), METEOR, Cyclops, MCDA Cool Flames Investigation, and Fast Neutron Spectrometer.
Jorge Sotomayor, Lead Increment ScientistExpeditions 51 & 52
Editor: Kristine Rainey
Publicado por salud equitativa en 5:04