A NASA scientist searching for other worlds has been named one of the most influential people on our world. Time magazine has named Kepler project scientist Natalie Batalha to the Time 100, its annual list of the 100 most influential people on Earth. Natalie shares this honor this year with planet-hunters Guillem Anglada-Escudé of the Queen Mary University of London, who discovered an Earth-size planet orbiting Proxima Centauri in 2016, and Michaël Gillon of the University of Liège in Belgium, who recently announced the discovery of seven Earth-size planets orbiting TRAPPIST-1 using NASA’s Spitzer Space Telescope. 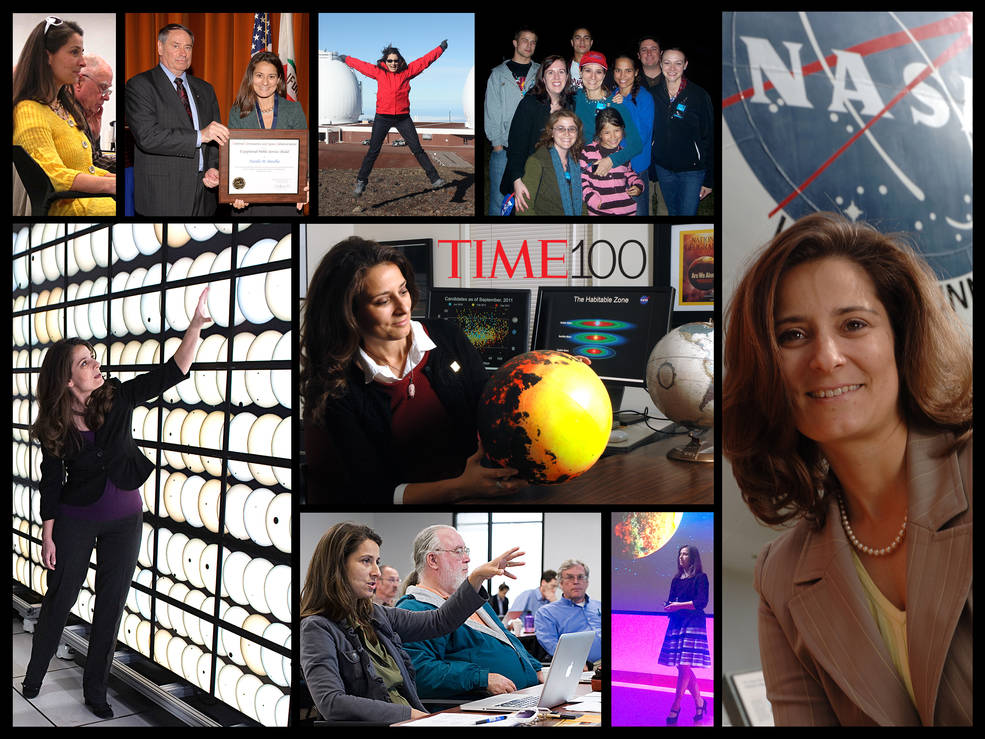 Time magazine has named NASA's Kepler mission project scientist Natalie Batalha to the Time 100, its annual list of the 100 most influential people on Earth.
Credits: NASA Ames/W. Stenzel
Batalha leads the science investigation effort for Kepler – NASA's first mission to find Earth-size planets beyond our solar system. Kepler is seeking to find how common planets are in other stars' "habitable zones," the range of distances from each individual star where temperatures could allow liquid water to pool on the surface of the planet without freezing or evaporating. Working at NASA's Ames Research Center in California's Silicon Valley, Batalha has been a leading figure of the mission since she joined the team in 1999.
"NASA is incredibly proud of Natalie. Her leadership on the Kepler mission and the study of exoplanets is helping to shape the quest to discover habitable exoplanets and search for life beyond the solar system," said Paul Hertz, Astrophysics division director at NASA Headquarters, Washington. "It's wonderful to see her recognized for the influence she has had on the world – and on the way we see ourselves in the universe."
Time magazine's Editor-in-Chief Nancy Gibbs has explained, “Each year our Time 100 list lets us step back and measure the forces that move us. … One way or another they each embody a breakthrough: they broke the rules, broke the record, broke the silence, broke the boundaries to reveal what we're capable of.”
Time ran a short article on Batalha's accomplishments. Batalha is the first woman at NASA to receive the Time 100 designation.
"I'm honored to be part of the TIME 100 and feel strongly that recognition belongs to the entire team of scientists and engineers who opened our eyes to the large number of potentially habitable worlds that populate the galaxy," said Batalha. "Searching for potentially habitable worlds makes one appreciate just how precious living worlds are. I hope that the discoveries from the Kepler spacecraft inspire people to learn more about other planets, and, in turn, make us love this one all the more."
Batalha holds a Bachelor's degree in physics from the University of California (UC), Berkeley, and a Doctoral degree in astrophysics from UC Santa Cruz. Batalha started her career as a stellar spectroscopist studying young, sun-like stars. Her studies took her to Brazil, Chile and, in 1995, Italy, where she was present at the scientific conference when the world learned of the first planet orbiting another star like our sun.
In 1999, after inquiring about the challenges that star spots present in distinguishing signals from transiting planets, Batalha began working on the Kepler mission with William Borucki, visionary and principal investigator of Kepler, at Ames. Today Batalha leads the Kepler team in determining the fraction of stars in our Milky Way galaxy that have planets that might be places for life as we know it. She participates on numerous scientific advisory panels to chart the future of NASA's astrophysics research to find life beyond the solar system and answer the question: are we alone?
"I am really delighted that Natalie is being honored by TIME Magazine. She has made major contributions to the Kepler Mission throughout its development and operation," said Borucki. "Natalie's collaborative leadership style, and expert knowledge of the population of exoplanets in the galaxy, will provide guidance for the development of successor missions that will tell us more about the habitability of the planets orbiting nearby stars."
Batalha began her undergraduate studies as a business major but discovered her passion in a physics lecture with the realization that numbers can describe the physical world -- the colors of a rainbow, for example, expressed by an equation. She saw her calling after experiencing the thrill of discovery studying data from research telescopes. The excitement of participating in the scientific process and seeing something no one had yet seen before had her hooked.
Curiosity and passion for science did not stop with Batalha. Her oldest daughter is a Ph.D. student studying the atmospheres of distant planets—one of the many things NASA's next flagship mission, the James Webb Space Telescope, will study. Batalha grew up in Northern California where she lives today with her family.
A NASA scientist searching for other worlds has been named one of the most influential people on this one. Time magazine has named Kepler project scientist Natalie Batalha to the Time 100, its annual list of the 100 most influential people in the world. Batalha leads the science investigation effort for Kepler, which is NASA's first mission to find potentially habitable Earth-size planets beyond our solar system.
Credits: NASA Ames
The list, now in its fourteenth year, will appear in the May 1, 2017, issue of TIME, available on newsstands on Friday, April 21, and now at time.com/time100.
Kepler has identified more than 5,100 possible exoplanets and verified more than 2,500 as bona fide planets. Of these, a dozen are Earth-like in size and orbit in their stars' habitable zones.
For more information on NASA's Kepler mission, visit:
http://www.nasa.gov/kepler
For more information about NASA's search for life, visit:
http://www.nasa.gov/content/the-search-for-life
Media contact:
Michele Johnson
Ames Research Center, Moffett Field, Calif.
650-604-6982
michele.johnson@nasa.gov
Editor: Michele Johnson
Publicado por salud equitativa en 4:22