A New Impact Site in the Southern Middle Latitudes | NASA

A New Impact Site in 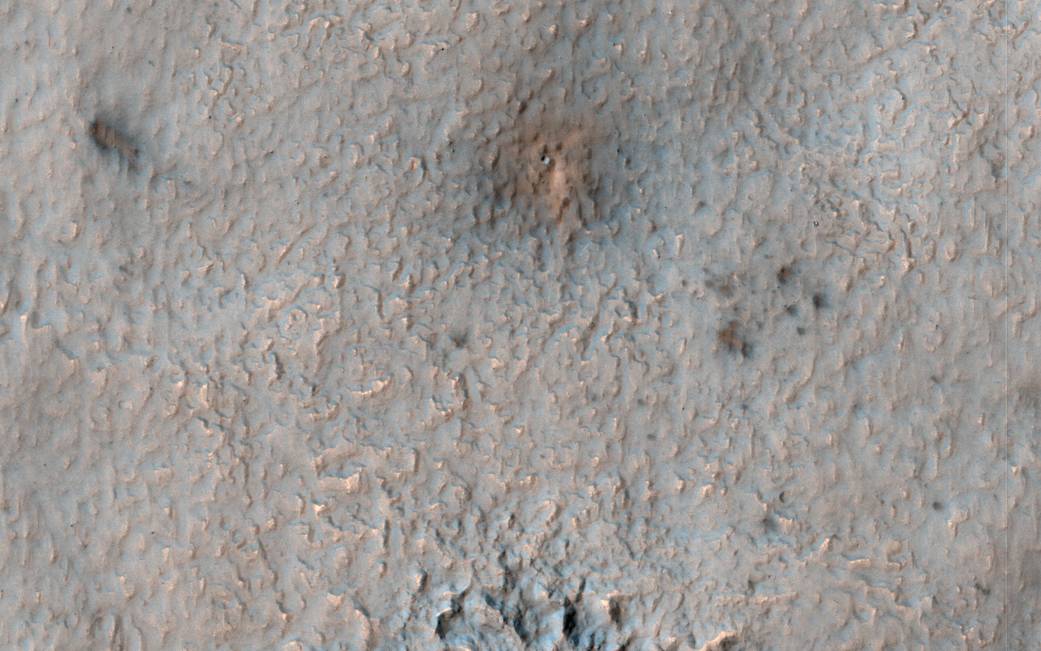 Over 500 new impact events have been detected from before-and-after images from NASA's Mars Reconnaissance Orbiter, mostly from MRO's Context Camera, with a HiRISE followup. Those new craters that expose shallow ice are of special interest, especially at latitudes where not previously detected, to better map the ice distribution.
We hope to find ice at relatively low latitudes both for understanding recent climate change and as a resource for possible future humans on Mars. This new impact, which occurred between August and December 2016 (at 42.5 degree South latitude) would provide an important constraint if ice was detected.
Alas, the HiRISE color image does not indicate that ice is exposed. There is an elongated cluster of new craters (or just dark spots where the craters are too small to resolve), due to an oblique impact in which the bolide fragmented in the Martian atmosphere.
The map is projected here at a scale of 25 centimeters (9.8 inches) per pixel. [The original image scale is 25.1 centimeters (9.9 inches) per pixel (with 1 x 1 binning); objects on the order of 75 centimeters (29.5 inches) across are resolved.] North is up.
The University of Arizona, Tucson, operates HiRISE, which was built by Ball Aerospace & Technologies Corp., Boulder, Colo. NASA's Jet Propulsion Laboratory, a division of Caltech in Pasadena, California, manages the Mars Reconnaissance Orbiter Project for NASA's Science Mission Directorate, Washington.
NASA/JPL-Caltech/Univ. of Arizona
Editor: Tony Greicius
Publicado por salud equitativa en 8:56