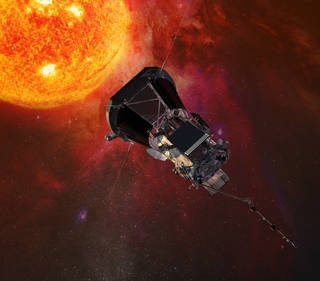 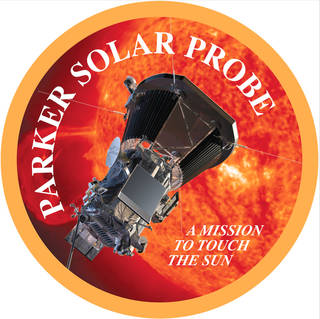 NASA’s first mission to go to the sun, the Parker Solar Probe, is named after Eugene Parker who first theorized that the sun constantly sends out a flow of particles and energy called the solar wind.
Credits: NASA/APL
NASA has renamed the Solar Probe Plus spacecraft — humanity’s first mission to a star, which will launch in 2018 — as the Parker Solar Probe in honor of astrophysicist Eugene Parker. The announcement was made at a ceremony at the University of Chicago, where Parker serves as the S. Chandrasekhar Distinguished Service Professor Emeritus, Department of Astronomy and Astrophysics.
In 1958, Parker — then a young professor at the university’s Enrico Fermi Institute — published an article in the Astrophysical Journal called “Dynamics of the interplanetary gas and magnetic fields.” Parker believed there was high speed matter and magnetism constantly escaping the sun, and that it affected the planets and space throughout our solar system.
This phenomenon, now known as the solar wind, has been proven to exist repeatedly through direct observation. Parker’s work forms the basis for much of our understanding about how stars interact with the worlds that orbit them.
“This is the first time NASA has named a spacecraft for a living individual,” said Thomas Zurbuchen, associate administrator for NASA’s Science Mission Directorate in Washington. “It’s a testament to the importance of his body of work, founding a new field of science that also inspired my own research and many important science questions NASA continues to study and further understand every day. I’m very excited to be personally involved honoring a great man and his unprecedented legacy.”
“The solar probe is going to a region of space that has never been explored before,” said Parker. “It’s very exciting that we’ll finally get a look. One would like to have some more detailed measurements of what’s going on in the solar wind. I’m sure that there will be some surprises. There always are.”
In the 1950s, Parker proposed a number of concepts about how stars — including our sun — give off energy. He called this cascade of energy the solar wind, and he described an entire complex system of plasmas, magnetic fields and energetic particles that make up this phenomenon. Parker also theorized an explanation for the superheated solar atmosphere, the corona, which is — contrary to what was expected by physics laws — hotter than the surface of the sun itself. Many NASA missions have continued to focus on this complex space environment defined by our star — a field of research known as heliophysics.
“Parker Solar Probe is going to answer questions about solar physics that we’ve puzzled over for more than six decades,” said Parker Solar Probe Project Scientist Nicola Fox, of the Johns Hopkins University Applied Physics Laboratory. “It’s a spacecraft loaded with technological breakthroughs that will solve many of the largest mysteries about our star, including finding out why the sun’s corona is so much hotter than its surface. And we’re very proud to be able to carry Gene’s name with us on this amazing voyage of discovery.”
NASA missions are most often renamed after launch and certification; in this case, given Parker’s accomplishments within the field, and how closely aligned this mission is with his research, the decision was made to honor him prior to launch, in order to draw attention to his important contributions to heliophysics and space science.
Born on June 10, 1927, in Michigan, Eugene Newman Parker received a Bachelor of Science in physics from Michigan State University and a doctorate from Caltech. He then taught at the University of Utah, and since 1955, Parker has held faculty positions at the University of Chicago and at its Fermi Institute. He has received numerous awards for his research, including the George Ellery Hale Prize, the National Medal of Science, the Bruce Medal, the Gold Medal of the Royal Astronomical Society, the Kyoto Prize, and the James Clerk Maxwell Prize.
Parker Solar Probe is on track for launch during a 20-day window that opens July 31, 2018. The mission is part of NASA’s Living With a Star program to explore aspects of the sun-Earth system that directly affect life and society. LWS is managed by the agency’s Goddard Space Flight Center in Greenbelt, Maryland, for NASA’s Science Mission Directorate in Washington, D.C. Johns Hopkins APL manages the mission for NASA and is designing and building and will operate the spacecraft.
Learn More
nasa.gov/solarprobehttp://solarprobe.jhuapl.edu
By Geoff BrownJohns Hopkins University Applied Physics Laboratory
NASA media contact: Karen C. Fox, NASA’s Goddard Space Flight Center, Greenbelt, Md.
Editor: Rob Garner
Publicado por salud equitativa en 15:16