One night three months ago, Rosa Castro finished her dinner, opened her laptop, and uncovered a novel object that was neither planet nor star. Therapist by day and amateur astronomer by night, Castro joined the NASA-funded Backyard Worlds: Planet 9 citizen science project when it began in February — not knowing she would become one of four volunteers to help identify the project's first brown dwarf, formally known as WISEA J110125.95+540052.8. 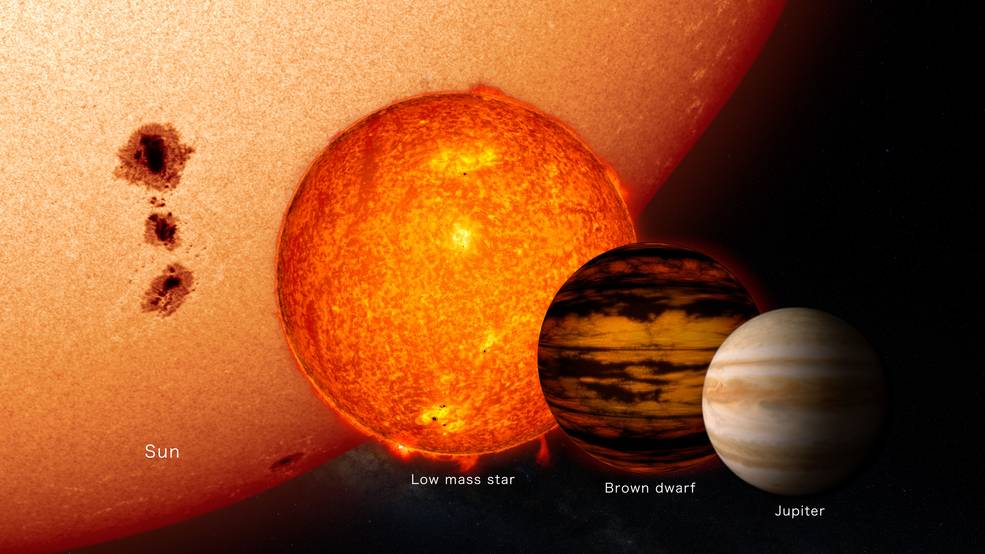 This illustration shows the average brown dwarf is much smaller than our sun and low mass stars and only slightly larger than the planet Jupiter.
Credits: NASA's Goddard Space Flight Center
Download this image from NASA Goddard's Scientific Visualization Studio
After devoting hours to skimming online, publicly available "flipbooks" containing time-lapse images, she spotted a moving object unlike any other. The search process involves fixating on countless colorful dots, she explained. When an object is different, it simply stands out. Castro, who describes herself as extremely detail oriented, has contributed nearly 100 classifications to this specific project.

The newly discovered brown dwarf WISEA J110125.95+540052.8 appears as a moving dot (indicated by the circle) in this animated flipbook from the Backyard Worlds: Planet 9 citizen science project.
Credits: NASA/WISE
A paper about the new brown dwarf was published on May 24 in The Astrophysical Journal Letters. Four citizen scientists are co-authors of the paper, including Castro. Since then, Backyard Worlds: Planet 9 has identified roughly 117 additional brown dwarf candidates.
The collaboration was inspired by the recently proposed ninth planet, possibly orbiting at the fringes of our solar system beyond Pluto.
"We realized we could do a much better job identifying Planet Nine if we opened the search to the public," said lead researcher Marc Kuchner, an astrophysicist at NASA's Goddard Space Flight Center in Greenbelt, Maryland. "Along the way, we're hoping to find thousands of interesting brown dwarfs."
It's been roughly two decades since researchers first discovered brown dwarfs, and the scientific community opened its eyes to this new class of objects between stars and planets. Although they are as common as stars and form in much the same way, brown dwarfs lack the mass necessary to sustain nuclear fusion reactions. They therefore do not have the energy to maintain their luminosity, so they slowly cool over the course of their lifetimes. Their low temperatures also render them intrinsically dim.
For years, Kuchner has been fascinated by infrared images of the entire sky captured by NASA's Wide-field Infrared Survey Explorer (WISE), launched in 2009. The space telescope is specially designed to observe cold objects emitting light at long wavelengths — objects like brown dwarfs. With its initial mission complete, WISE was deactivated in 2011. It was then reactivated in 2013 as NEOWISE, a new mission funded by the NEO Observations Program with a different goal: to search for potentially hazardous near-Earth objects (NEOs).
Previously, Kuchner had focused on stationary objects seen by WISE. But the Backyard Worlds: Planet 9 project shows the WISE and NEOWISE data in a way custom-tailored for finding fast-moving objects. His team layers many images of the same location to create a single, comprehensive snapshot. These are then combined with several similarly "co-added" pictures to form flipbooks that show motion over time.
Anyone with internet access can scour these flipbooks and click on anomalies. If they would like to call the science team's attention to an object they found, they can submit a report to the researchers or share their insights on a public forum. Kuchner and his colleagues then follow up the best candidates using ground-based telescopes to glean more information.
According to Backyard Worlds: Planet 9 citizen scientist Dan Caselden, participants are free to dig as deep into the results as they choose. A security researcher by trade, Caselden developed a series of tools allowing fellow participants to streamline their searches and visualize their results, as well as aggregate various user statistics. He also helped identify several of the additional brown dwarf candidates while the first discovery was being confirmed.
Kuchner and his co-author, Adam Schneider of Arizona State University, Tempe, agree WISEA J110125.95+540052.8 is an exciting discovery for several reasons. "What's special about this object — besides the way it was discovered — is that it's unusually faint," Schneider said. "That means our citizen scientists are probing much deeper than anyone has before."
While computers efficiently sift through deluges of data, they can also get lost in details that human eyes and brains easily disregard as irrelevant.
However, mining this information is extremely arduous for a single scientist or even a small group of researchers. That's precisely why collaborating with an enthusiastic public is so effective — many eyes catch details that one pair alone could miss.
While Kuchner is delighted by this early discovery, his ultimate goal for Backyard Worlds: Planet 9 is to find the smallest and coldest brown dwarfs, called Y dwarfs.  Some of these Y dwarfs many even be lurking closer to us than Proxima Centauri, the nearest star to the sun.
Their low temperatures make Y dwarfs extremely dim, according to Adam Burgasser at the University of California San Diego. "They're so faint that it takes quite a bit of work to pull them from the images, that's where Kuchner's project will help immensely," he said. "Anytime you get a diverse set of people looking at the data, they'll bring unique perspectives that can lead to unexpected discoveries."
Kuchner anticipates the Backyard Worlds effort will continue for several more years — allowing more volunteers like Caselden and Castro to contribute.
As Castro put it: "I am not a professional. I'm just an amateur astronomer appreciating the night sky. If I see something odd, I'll admire and enjoy it."
Backyard Worlds: Planet 9 is a collaboration between NASA, UC Berkeley, the American Museum of Natural History in New York, Arizona State University, the Space Telescope Science Institute in Baltimore and Zooniverse, a collaboration of scientists, software developers and educators who collectively develop and manage citizen science projects on the internet.
NASA's Jet Propulsion Laboratory in Pasadena, California, manages the NEOWISE mission for NASA's Planetary Defense Coordination Office within the Science Mission Directorate in Washington. The Space Dynamics Laboratory in Logan, Utah, built the science instrument. Ball Aerospace & Technologies Corp. of Boulder, Colorado, built the spacecraft. Science operations and data processing take place at the Infrared Processing and Analysis Center at Caltech in Pasadena. Caltech manages JPL for NASA.
For more information about Backyard Worlds: Planet 9, visit:
http://backyardworlds.org
For more information about NASA's WISE mission, visit:
http://www.nasa.gov/wise
Banner image: This illustration shows a close-up view of a Y dwarf. Objects like this, drifting just beyond our solar system, have been imaged by NASA's Wide-field Infrared Survey Explorer and could be discovered by Backyard Worlds: Planet 9. Credit: NASA/JPL-Caltech
By Raleigh McElveryNASA's Goddard Space Flight Center, Greenbelt, Md.
Editor: Rob Garner
Publicado por salud equitativa en 13:12